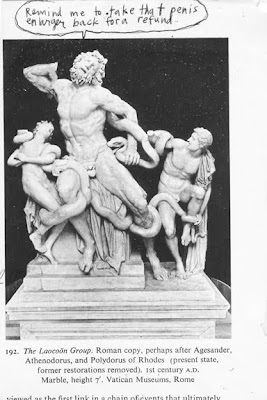 Continued from An exile returns: Traveling exhibition re-introduces Germany to émigré art historian H.W. Janson August 10, 2004 by Liam Otten for the "WUSL Newsroom"
"Janson's story is not known in Germany; he is a rediscovery," said Sabine Eckmann, Ph.D., curator of the Kemper Art Museum and a German native. However, "there is a lot of German interest in exile, in all of these artists and all of these artworks that were lost. It's part of Germany's art history.

"Exile and Modernism demonstrates what one exile art historian was able to do in the United States at a time when modern art was banned as degenerate in Germany," continued Eckmann, a specialist in exile art. "It also offers a chance to rethink the meanings of concepts like 'exile' and 'modernism' and their connection to one another. We typically see exile as an experience of loss or isolation, but Janson shows that exile can produce creative energies. There's an interesting dialog between his experience of Nazi culture, which caused him to react to certain strains of modern art, and his new orientation in America"...

[H.W. Janson's History of Art is one of the most-used art history texts in the Anglo world, and was assigned for the first intro art history survey course I took in the mid-80s. Art History survey courses being what they are, I had to keep my mind alive somehow, and I took it upon myself to make necessary alterations, some of which are featured in the forthcoming group show No Laughing Matter: Art and Humor in Southern California (a Modest Sampling) at LA Valley College. I will try to post the rest of them here as a public service.]
Posted by DougH at 1:36 PM