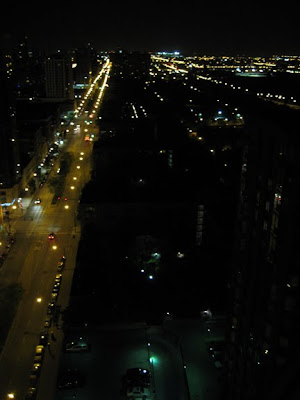 So here I am in Chicago to participate as one of 15 "fellows" in the Stone Summer Theory Institute, an annual weeklong seminar led by Jim Elkins at the School of the Art Institute. Not my usual cup of fish, but this year's theme is "What Do Artists Know?" which more-or-less translates into "How can art be taught?" which has always been a thorn in my brain, but much more so since I started teaching intro studio painting at West LA College last year. Somehow I got stashed in the same SAIC condo where I stayed last time I visited - everyone else is in a hotel, so I figure its some kind of quarantine since I believe I'm the only non-career academic and self-identified artiste in the lot. That's the view from my 24th floor picture window, and this is my attempt to modify the early morning lighting situation. Eat your heart out Olafur Eliasson! 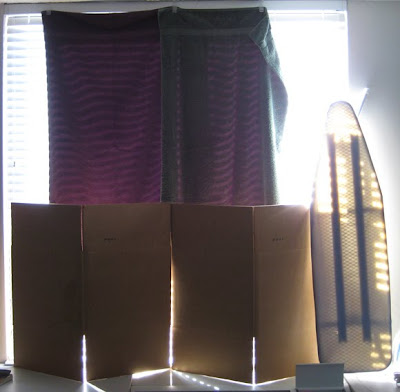 The actual wingding doesn't officially kick off until the morning (leaving me plenty of time to finish the 1500 pages of required readings!) but there was an introductory lecture and dinner. In between I bought some groceries, got caught in a rainstorm (Member those homies? No fear, El Nino's a-comin!) and wandered around the Art Institute taking pictures of artworks involving detached heads. My subconscious' way of gearing up for the colloquium I guess! More soon. 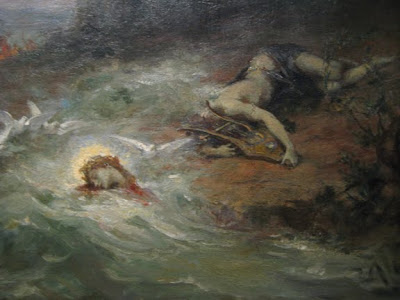 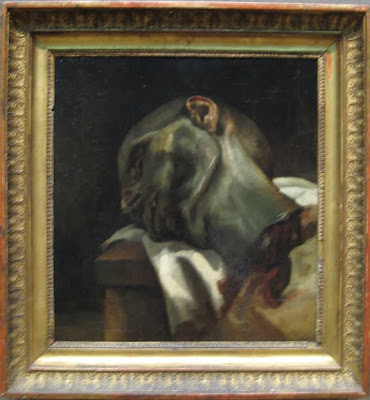 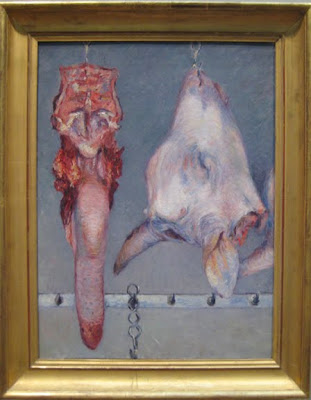 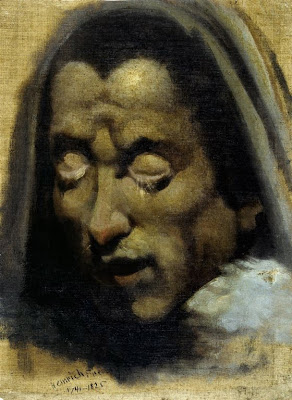 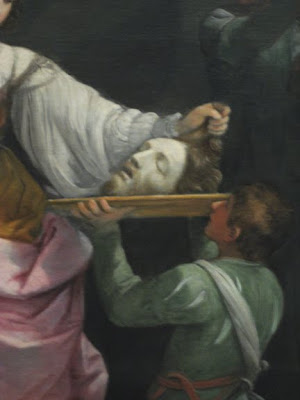 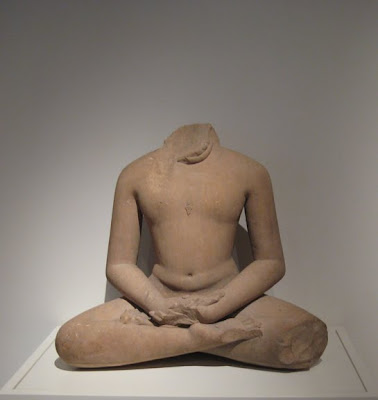 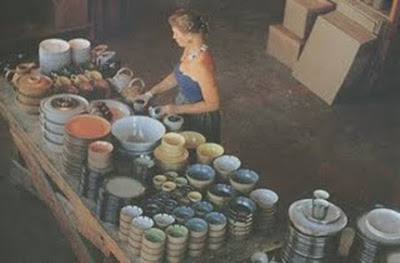 "Swinging by the Pasadena Museum of California Art is often like grazing some kind of far-fetched fusion buffet — blithely mixing collectible vinyl action figures with early California Impressionist landscape painting, wrapped in a custom rainbow fumigation tent with a side order of spray-painted Kenny Scharf legume entities. The gestalt isn’t always successful, but the unexpected shifts can deliver the effect of cleansing the mental palate, piquing your appetite for the next new sensation.

The current menu is particularly appetizing, sandwiching a combination of smooth midcentury modernist design and funky, quirky postmodernisms between two slices of contemporary landscape experiments. And, appropriately enough, the largest of these shows is devoted to dinnerware. Edith Heath (1911-2005) was a Danish farm girl from Iowa, who reinvented herself as one of the central figures of midcentury West Coast Modernist design, founding Heath Ceramics in 1947 with a mission to produce sturdy, functional and affordable ceramic products — primarily dishware and tiles — in a minimal, Bauhaus-derived vocabulary of clear, simplified geometry and cool, subtle colors. The company still manufactures out of Sausalito and maintains a store on Beverly Boulevard... 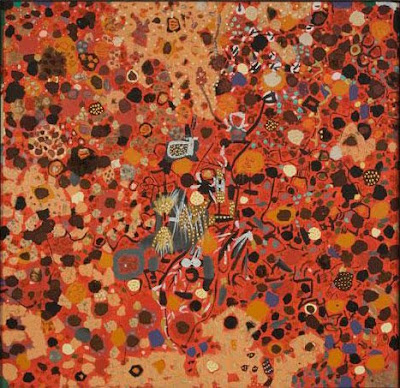 The remainder of the large main gallery is taken up by a small survey of work from a peculiar California art-historical moment — when the hippest campus in the state wasn’t CalArts or UCLA or SFAI or CCAC but UC Davis, located just west of Sacramento in the Culture-forsaken Central Valley, and known primarily as an agriculture and veterinary university. Somehow, Davis wound up home to five of the more idiosyncratic representational American artists of the 1960s... 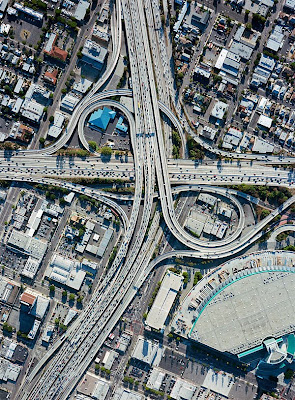 Of the two landscape projects bracketing the Heath and “You See” exhibits, architectural photographer Benny Chan’s is the more formally elegant and serene — surprising, considering that “TRAFFIC!” consists of huge, incredibly detailed aerial depictions of gridlocked L.A. freeways shot with a purpose-built 8-by-10 camera while dangling from the side of a helicopter. I’m not convinced of the ostensible consciousness-raising purpose of the work (“Heavens, you mean rush-hour traffic in L.A. sucks?”) but the built-in compositional framework and undeniable curvilinear beauty of the interchanges paired with Chan’s technical prowess make a persuasive argument for getting your own helicopter. 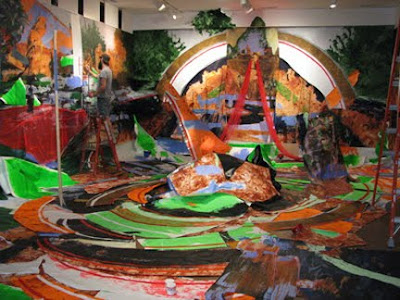 PMCA’s front project room is given over to the latest version of “a never-ending painting in three dimensions” by young landscape artist (and L.A. Weekly Annual Biennial alumnus) Annie Lapin. Over the past few years, Lapin’s lushly painted montage vistas have been subjected to increasing amounts of stress, from barely discernible discontinuities in slightly quirky pastoral scenes to furious torrents of barely cohesive planar fragments rendered in garishly saturated colors..."

And see the shows at The Pasadena Museum of California Art, 490 E. Union St., Pasadena, through September 20. 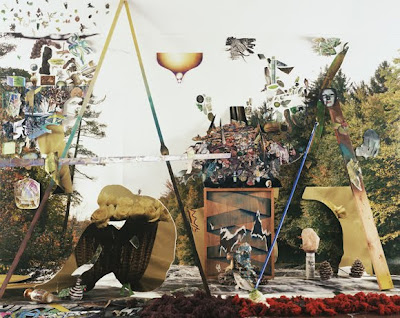 "September 11 is upon us, and we all know what that means — opening weekend for the new fall line of upscale home decorations! But, hey, given the profusion of cultural fanfare marking previous anniversaries of the whole chickens-coming-home-to-roost thing (and the brouhaha undoubtedly brewing in anticipation of the imminent 10-year milestone) it’s not surprising that the art world would want to back away from geopolitical topicalism in favor of a back-to-normal (a.k.a. “Daddy Obama will fix everything! Let’s go shopping!”) mode of discourse. Which is fine. Frankly, I would consider the most self-indulgently aesthetic self-expression more authentically political than most formulaic ideological illustrations. This weekend offers the gamut, in overwhelming abundance — here are a few of the highlights to help map out your gallery-hopping..."
Read the rest of Snips & Snails: Let the Fall Art Season Begin! here 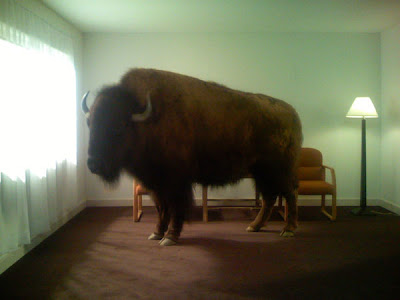 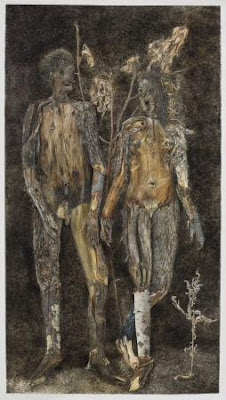 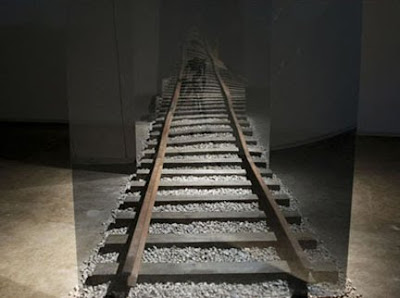 [That originally read "Colored Daddy" - as opposed to (or rather, indistinguishable from) White Daddy or Girl Daddy - but saner minds prevailed.]

Less of a Chartres Vibe, More Like Feeding Frenzy 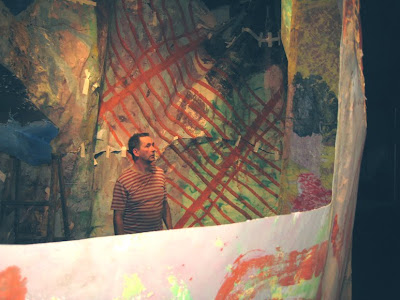 Well, that went pretty much according to plan, except for the 4-hour installation (it would have been longer - probably impossible - without the help of renaissance dude Michael Gomez-Burton who also shot some of these photos) and the fact that the piece wasn't as space-filling as I thought, and kept tearing, and partially collapsed before I got to the opening/happening. But since I didn't actually have a plan, it's safe to say it went "like clockwork". Here's a self-explanatory series of photos depicting the installation/performance/cleanup. Thanks to everyone who came, especially the 41 people who purchased a slice of history. 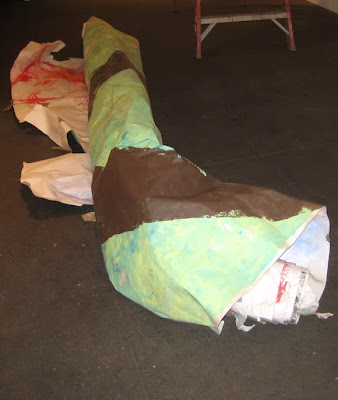 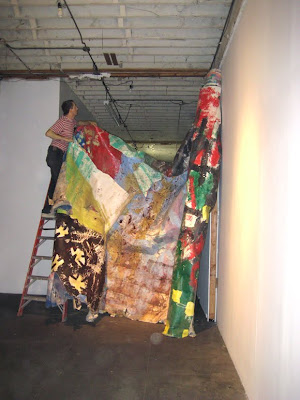 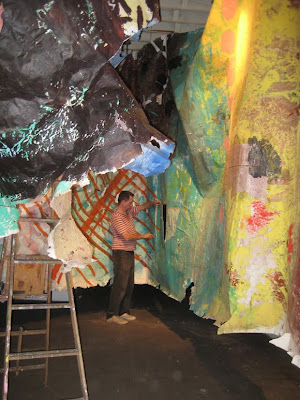 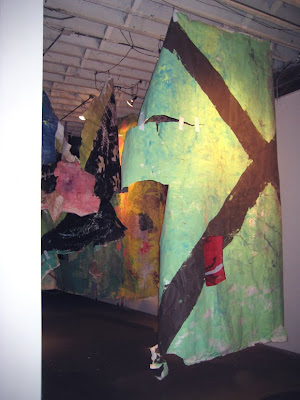 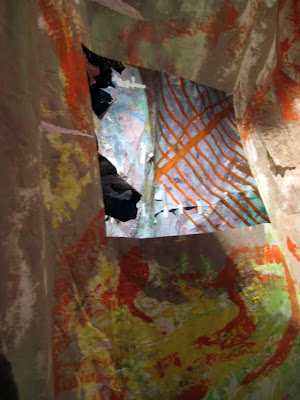 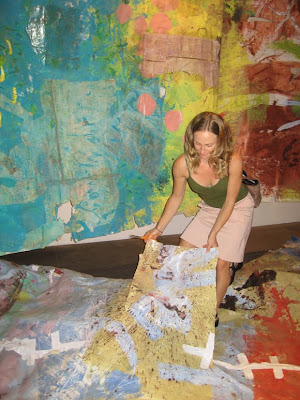 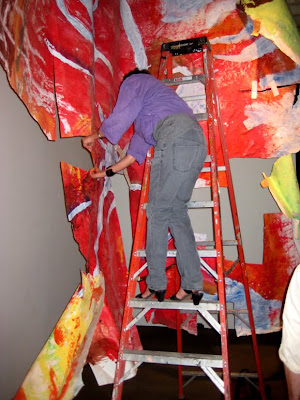 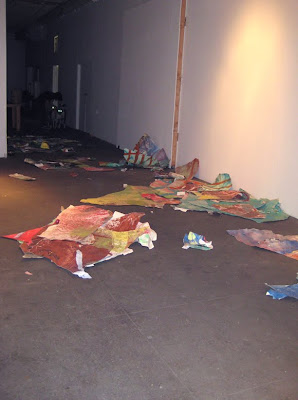 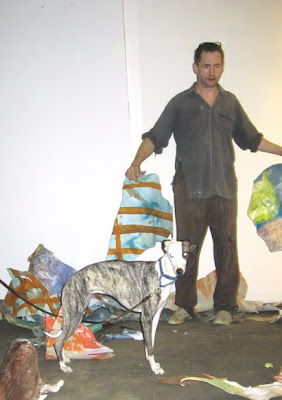 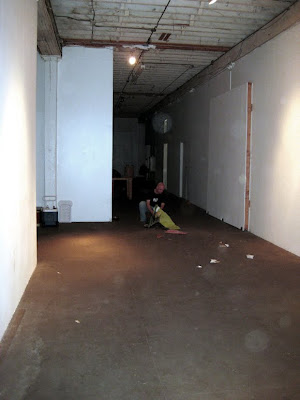 "Carving Up (and Passing Round) the Ruins of Abstract Painting" 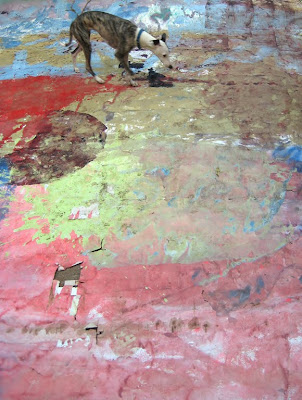 For his third solo exhibition at POST (or P0ST), Doug Harvey will present a giant, two-sided interactive abstract painting on paper. Part of Harvey’s recent exploration of working with discarded, decaying, and purposely pre-rotted materials, the painting was executed using aged leftover paints, including latex mistints, curdled acrylics, oils gone wild, and mystery fluids found in unmarked cans and left to ferment for up to a decade. The paper is an entire roll of “seamless” photographic backdrop paper found on the street and left outside in the elements for the last 4 years.

Arranged in a clockwise spiral (in a balancing opposite rotation to the layout of his 1997 POST installation St. Sebastian Tom Sawyer Cathy Mishima Expo 67, the approximately 11 ½ X 64 ft St Sebastian Soylent Rainbow Labyrinth operates as a basic Chartres-like walk-through environment. Excised rectangular segments interrupt the stability of the visual continuum, and the excised portions are available for sale to the public at $5 per segment. In addition, visitors may excise any rectangular segment from the larger work for purchase. The artist will be present to sign any purchased segment. St Sebastian Soylent Rainbow Labyrinth was created specifically for this one-night exhibit, and any unsold portions will be destroyed at the end of the show.

Silent for Ever on the Grid Mass 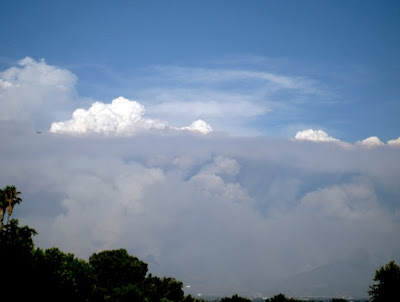 I stumbled across a website featuring some of the poetry of my Great Uncle Joe - a dirt-poor French-Canadian farmer who self-published his work out of Bodmin, Saskatchewan - and ran it through the google translator. Here's a sample:

"I have since long years there in a secretary,
Among my memories a black sealed envelope;
He was sent to me by a summer night --
Echo of a long sigh as I would have been silenced.

It is there. No one ever will know the mystery.
I fuck sometimes, vaguely troubled.
I listen, my heart beats! It seems to me tinkle
As tinkles in the mist of a monastery bell ...

And suddenly sad, as remorseful
I say: Why bother? - Since the beautiful sleeping
Silent for ever on the grid mass

Do not speak the posthumous letter
Let sleeping peacefully in their dark room
And the lover and the ice love letter!"