Actually the flu, and also swamped with puppies, fingerprinting, collapsing sheds, economies, and civilizations, and other distractions. Its all documented and coming here soon, but in the meantime here's my most recent LA Weekly column, on the Brewery Project wrap party...

"It’s hard to imagine this late in the game, but only a few years ago, it was possible for an enterprising and ambitious member of the art-world cognoscenti to open these storefront showrooms — known as “galleries” — to which middle-to-upper-class consumers would come and acquire decorative artifacts with their “disposable income.” Since those halcyon days, the art market has pretty much retracted into its shell, leaving only a slimy residue to mark its decade of giddy self-congratulations, and a vacuum of both qualitative (ka-ching!) criteria and exhibition opportunities.


But culture abhors a vacuum, and despite the fact that this may well be the end of The Art World as we know it, it behooves us to consider the legacy of an artist-run project space that sprang up the last time the beaux arts economy tanked. The At the Brewery Project (or AtBP) ran more or less continuously from 1997 to 2007 in the titular Lincoln Heights art colony (formerly the Pabst plant), shepherded by artist/organizer John O’Brien. Technically speaking, that specific decade coincided with the recent boom years, but the roots of AtBP lie in several of O’Brien’s earlier collaborative exhibition series created in direct response to the bottomed-out art economy of the early ’90s.

As much as the art community bemoans these periodic downturns and disparages the “myth” linking creativity and poverty, it’s an undeniable fact that when commercial enterprises and bureaucracies drop out of the picture, artists have to become more inventive and improvisational if they want to share their work with the world. L.A.’s underdocumented history of artist-run spaces didn’t begin in the ’90s, but that period saw an enormous proliferation of such venues, ranging from garages in Echo Park and Pasadena bungalows to commandeered suites of motel rooms and guerrilla shows in abandoned industrial spaces.

AtBP, which mounted more than 50 artist-curated shows in the course of its existence, is in many ways an exemplary model for such grass-roots enterprises, and “At the Brewery Project, 1993-2007: The Finale” — the sprawling, piecemeal self-homage currently occupying most of Pasadena’s Armory Center for the Arts — wisely forgoes an encyclopedic historical overview (although the accompanying catalog and Web site, www.atthebreweryproject.com, provide considerable chronological detail) in favor of a grand extravaganza in the spirit of the original premise."

Read the rest of Last Round: At The Brewery Project: The Finale here. 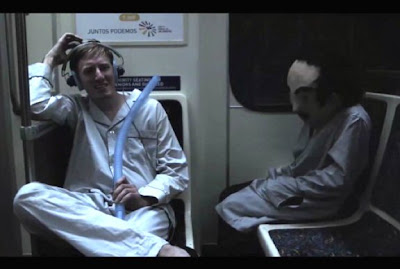 Purse Launch's orgone seems to be all backed up in this still from the highly good new video for Safe in Sound, everybody's favorite song off the Mad Gregs' debut album Big Nun. Happily the Reichian therapist in the adjacent seat seems to be preparing to help alleviate PL's discomfort, ensuring a harmonic climax of whirlies in the end.
Posted by DougH at 11:50 AM 4 comments: 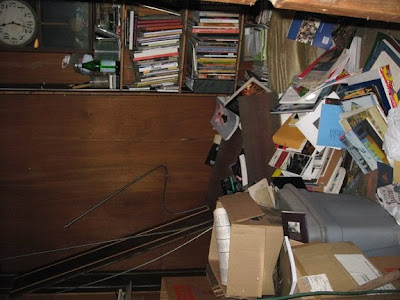 Goddammit! My book shed has started collapsing. I guess it was only a matter of time. But my God, there's catalogs everywhere! Maybe its a suggestion that I significantly accelerate my de-cluttering agenda. Don't know how much blogging I'll get around to doing in the next few days, but hold tight - I have some wicked cute puppy pictures, a new piece in the Weekly, and a wealth of images and anecdotes from the recent Hi Good shoot - coming soon to this URL.
Posted by DougH at 2:03 PM No comments: 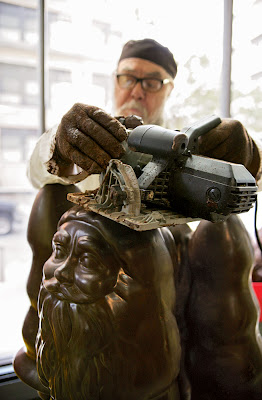 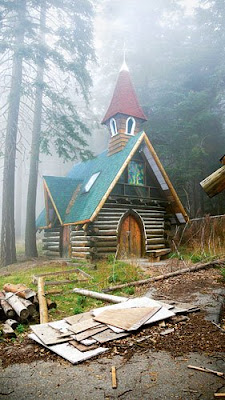 Just got back from a week up near Chico on the Hi Good shoot. More to follow!
Posted by DougH at 4:56 PM No comments: