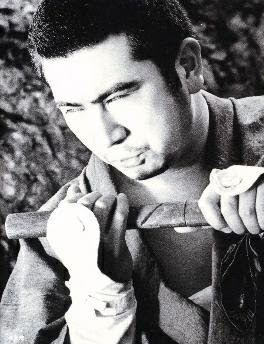 That's Zatoichi, the blind swordsman, pictured above.
Posted by DougH at 1:41 PM No comments:

One Kippenberger with everything, for here 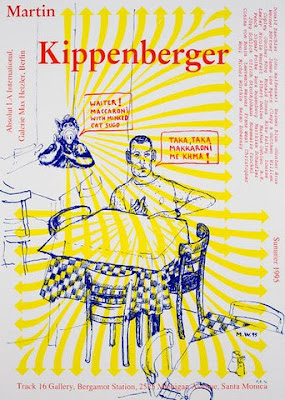 It's been a pretty hectic week what with the amazing Mel's Hole panel discussion, taking Nigel to the chiropractor and happening upon the nextdoor offices of the speech therapist who arranged for us to get him in the first place, trying to see Martin Kersels' show at ACME on Tuesday, booking Mannlicher Carcano's Gala 20th Anniversary West Coast Mini-Tour 2008, and assembling and installing my solo retrospective Untidy: The Worlds of Doug Harvey. More on that shortly, but now this:

"A sleazy trickster version of German multidisciplinary “social sculptor” Joseph Beuys, Martin Kippenberger seems to have been always on, treating all areas of his life as opportunities for creative disturbance — including everything from barroom brawls to, well, graphic design. When painters are annoyed by the deliberately confrontational awkwardness of Kippenberger’s oil paintings, I point out the formal elegance and spontaneity of his design — a formal elegance that underlies all of his work, no matter how superficially repugnant.

This is probably due to graphic design’s relative lack of academic baggage and vastly lower threshold for visual osmosis when compared to the Fine Arts of painting, drawing, sculpture and printmaking — to whose conventions Kippenberger regularly administered vigorous corrective debasement. Recent papal bulls concerning Fred the Frog notwithstanding (in early September, Pope Benedict reportedly condemned Kippenberger’s 1990 statue Feet First, which depicts the artist’s totem amphibian crucified but clinging to his mug of beer, and which is currently on display in the Italian city of Bolzano), it seems unlikely that any young folk are going to see anything more outrageous in the artist’s provocations than a catalog of the dominant experimental strategies of the last decade. 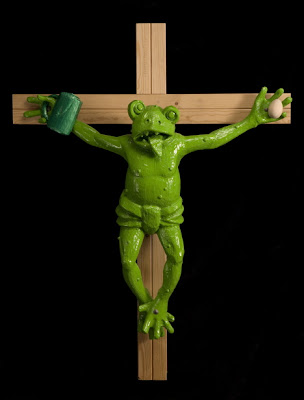 It may be less a question of influence than of prescience — Kippenberger’s relentless skepticism, globetrotting career, impatient and idiosyncratic social/political engagement, and refusal to disavow poetics and beauty (however stripped down or wonky) were all a few years ahead of the curve, but his reputation as a boozy, ridiculously macho troublemaker made him a difficult role model in the go-go ’90s. Many stylistic facets of his all-encompassing Euro-slackerism have since found their way piecemeal into the mainstream of contemporary art in the hands of more compartmentalized (and socially presentable) practitioners. But encountered as a totality, the singular stylistic innovations of his work become secondary to their unifying underlying identity as outbursts of creative insurgency — an example much harder to follow than, say, making funky furniture out of weird shit and calling it art." 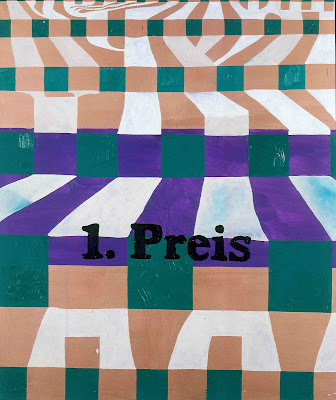 Read the rest of Enter the K-Hole here.
Posted by DougH at 11:51 AM No comments:

Here
Posted by DougH at 2:28 PM No comments:

"The Hole Truth and Nothing But" 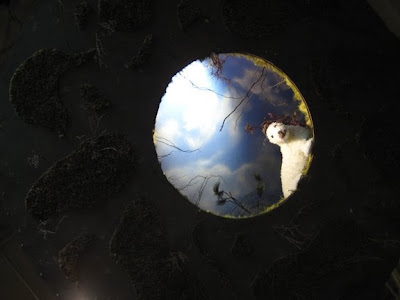 Curator Doug Harvey leads an informal discussion (and catalog signing) with artists and writers Jeffrey Vallance (whose Melwork is pictured above), Christian Cummings, Brian Tucker, Victoria Reynolds, and Judy Spence on the strangely inspiring bottomless hole in rural Washington that is the subject of the current exhibit at GCAC. Free and open to all