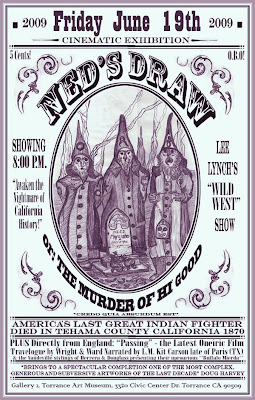 As part of the new programming at the Torrance Art Museum, Los Angeles based artist/curator/critic Doug Harvey has selected Lee Lynch's film titled "Ned's Draw" -- a neo-revisionist True Crime Western -- as the inaugural installment of the TAM's new film series. The film will be supplemented with live acting and an installation.
Doug has also selected a new short by Eric Wright & Cathy Ward titled "Passing" which is narrated by LM Kit Carson who wrote Paris, Texas. 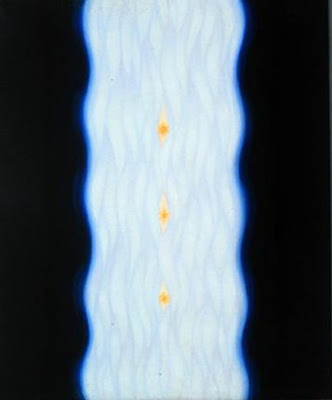 "The impression most people have of the history and meaning of 20th-century abstract painting basically involves a bunch of can-do postwar East Coast American dudes systematically stripping away subjective frills such as “content” to arrive at the monochromatic squares and precise geometric diagrams of Minimalism and Conceptualism, which allegedly refer to nothing outside themselves. 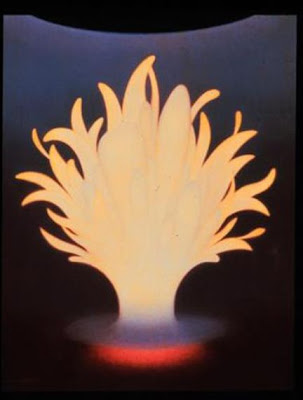 I’m not sure if any of the actual artists in question would subscribe to this version of history, but it has nonetheless seeped into the surface levels of our collective cultural consciousness, effectively burying a deeper and more complex story — a story less about real men optimizing the efficiency of the decoration industry and more about a bunch of middle-aged ladies wandering the desert in search of transcendental light. 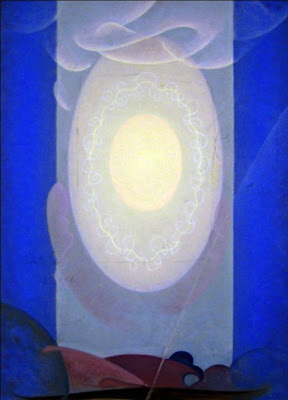 However glossed over in the interests of secular technophilia, this alternate account of the significance of capital-A Abstraction keeps bubbling up, most elegantly in 2005’s 3 x Abstraction: New Methods of Drawing by Hilma af Klint, Emma Kunz and Agnes Martin (possibly the best show ever hosted by the Santa Monica Museum of Art) but perhaps most emphatically in LACMA’s 1986 exhibit (and exhaustive catalog) The Spiritual in Art: Abstract Painting 1890-1985. Aside from af Klint, one of my personal revelations from that show was local mystic Agnes Pelton, who spent her most productive years in Palm Springs–adjacent Cathedral City, painting luminous, symmetrical conflations of the natural and inner landscapes that teeter between geometric decoration and symbolic illustration; between sumptuous formal design and painting deployed as a tool for entering (and prompting) altered states of consciousness. 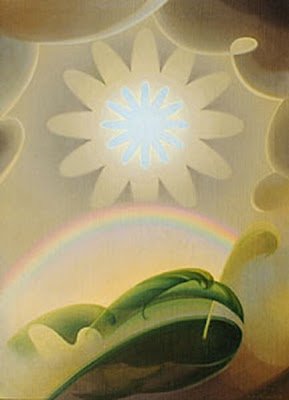 After experiencing the disproportionate presence manifested by Pelton’s Sandstorm (1932) in LACMA’s sprawling, cluttered millennial Made in California extravaganza — the modestly scaled but optically riveting oil painting actually caught and held my attention from across the vast museum lobby — I became a little obsessed. Pelton, born in 1881, had quintessentially beat-bohemian credentials. Though born into money, her maternal grandfather — journalist Theodore Tilton — had struck a major blow to American sexual Puritanism by suing his friend Congregationalist minister Henry Ward Beecher, an abolitionist but vocal opponent of the “Free Love” movement, for adultery with his wife. The resultant front-page trial did considerable damage to Beecher’s reputation (and the political credibility of overt sexual repression), and drove Tilton into exile in a Parisian boarding house, where he supported himself by writing poetry. That was the mother’s side. Pelton’s father, a globetrotting bipolar Louisiana sugar heir, OD’d on morphine when Agnes was 9."


See the show through Sept 6th at the Orange County Museum of Art.

A Sense of Entitlement 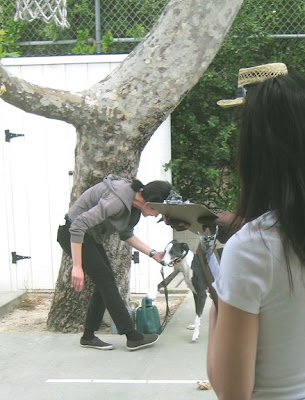 All Hail Sporting Fields' Nigel, NW1! Nigel is the first whippet to have earned the Nosework 1 title, though doubtless many will follow his lead. Always a trailblazer, Nigel was among the first group of pet dogs to pursue this new field of competitive canine sport, which evolved from drug and bomb sniffing training and involves locating arbitrarily scented cotton swabs hidden variously on a vehicle, in a room, in an exterior space, and in one of a series of boxes.You can learn more about Nosework classes and competitions at www.funnosework.com

Above: Nigel nails the exterior search. It was in the watering can.
Below: Nigel with his ribbon. 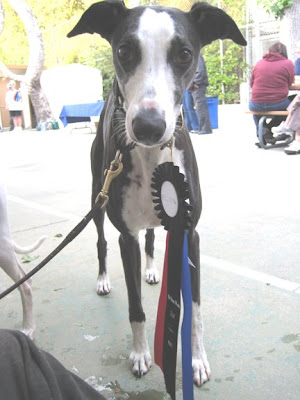 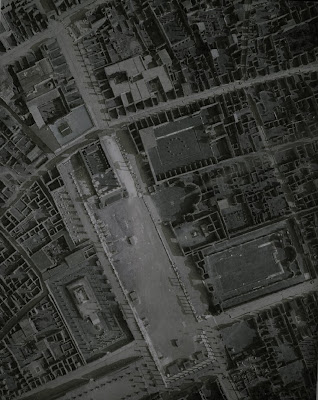 "Those familiar with Steve Canaday’s work from back around the turn of the millennium will recognize this move as a periodic return to the abstract roots from which his lurid imagery blossomed — a consolidation of the lessons gleaned from immersion in skanky figuration. And a rich, black volcanic compost it yields indeed. Consisting of a half-dozen medium-size shaped canvases embossed with coarse monochromatic black-on-black grids of rectangles in high relief, like buttons on a metastasizing cell phone, the tread of a shredded monster truck tire, or an aerial map of a charred cityscape — Canaday’s Black, Blacker, Blackest suite possesses a physicality and gravitas only hinted at in his earlier work.

Highlighted with satellite night vision–green patches and halos, constructed in vague resemblance to automotive fragments, and occasionally sprouting an antenna from a top stretcher bar, these cartoonishly postindustrial geometric abstractions flirt with figuration just enough to spoil their reading as doctrinaire Minimalism, while retaining their prerogative as remarkably decorative objects. Call it Late American Imperial — sumptuous and unique material commodities that seem to embody a stripped-down symbolic divination of their host culture’s impending demise — the last feeble flickering of the fluorescent-green ghost before it becomes all machine, the last sputtering transmission from VALIS to penetrate the Black Iron Prison. 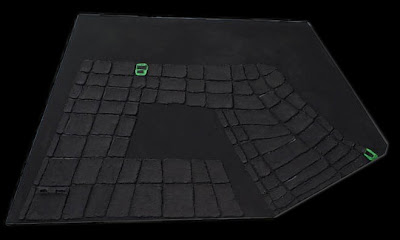 But maybe I’m projecting. There’s a strong temptation to look for signs and portents of impending collapse in the artifacts of a doomed culture, even in the midst of seemingly perpetual supremacy. Of course, this works even better in hindsight, which accounts to some extent for the ongoing public fascination with the excavated detritus of the city of Pompeii. While undeniably constituting one of the most remarkable archeological treasure troves ever dug up, the flash-fried ruins of this first-century Neapolitan resort town have elicited a perverse and subjective fascination from the modern Western imagination since their rediscovery in the mid-18th century.

As a story, it’s pretty much got everything — sex, death, explosions, pathos and a surprising amount of humor. I get a sense that the city’s excavation created a McCluhanesque media shift in our perception and processing of (at least) antiquities — after all, Pompeii and its neighboring cities constitute a sort of holographic virtual-reality snapshot of a 2000-year-old culture — a century before photography began to condition our perceptual models to accommodate such frozen sensory data. This sudden holistic shift had a profound effect on archeology, art history and museology, but also sent shock waves through our species’ common cultural and sensory software."

Read the rest of Apocalypse Now & Then here.
Posted by DougH at 10:00 AM No comments: