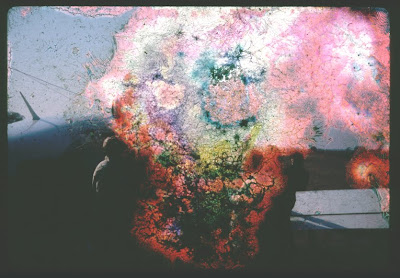 I had a feeling we were going for the gold, and as it turns out today's high of 113 degrees Fahrenheit not only broke the 105 record for this day in 1963, but set an all-time record for high temperature ever in downtown LA! We're #1! USA! Due to in vivo brain boilage I haven't got around to finishing up any of my writing chores, but I painted a portrait of young bobby Fischer. Last night in my fevered, fitful sleep, I thought I heard the name of Mouldy Slide enthusiast and multimedia Svengali Mark Pilkington mentioned as a guest on Coast to Coast AM. As it turns out, Mark was indeed the 2nd-hour guest on George Knapp's show last night, discussing his overdue rationalist (in the true sense of the word) reassessment of UFO theories and evidence from the last several decades.
Posted by DougH at 8:03 PM No comments: 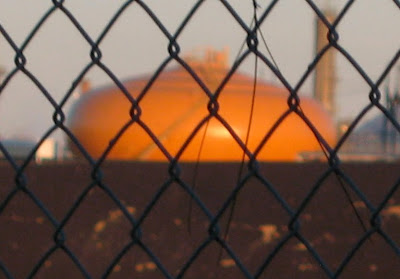 For those outside of the metropolitan Los Angeles area, we've been having a wicked heat wave - supposed to go at least to 105 today, maybe hotter. On top of that I've had a bad flu with fever the last 3 days, so I've been having crazy dreams (most recently in the form of layered postmodernist - but pulp vintage - comic books by and about a female mad scientist... the details are drifting away....) I used to write all this stuff down, but it gets to be a full time job in itself, and I already have three of those...
Posted by DougH at 10:24 AM 1 comment:

Catching "Up" with steve roden 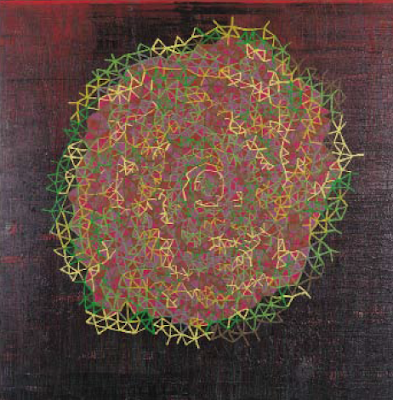 Things have been hectic - not least as regards Chloe's nether regions which have been in estrus, necessitating constant supervision -- and precipitating mental craziness in Portfolio. Nevertheless we did manage to load them all up and drive 99% of the way to Pomona for steve roden and Ginny Bishton's openings at the Pomona College Museum of Art before the left rear tire on the Accord shredded and we had to spend the evening at the Glendora Walmart Lube & Tire Express instead. So I had a few pieces in the recent LA Weekly Art Issue, the largest of which is a piece on none other than steve roden, and it goes a little something like this...

"Until I finally saw them standing next to each other at a barbecue a couple of years back, I always had a suspicion that Steve Roden and Tim Hawkinson might be the same person. This in spite of the fact that I've known both personally for a couple of decades, and they bear almost no physical resemblance to one another. I couldn't completely rule out the possibility that some alien with the hyperdimensional equivalent of a fun-house mirror was pulling a fast one. Come to think of it, he could have been using some doppelgänger beam at that barbecue. The theory may bear further scrutiny. 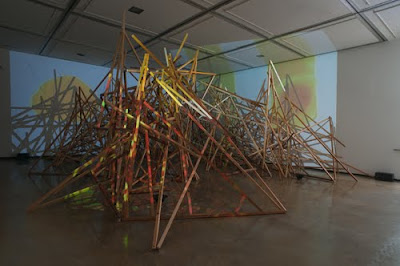 OK, here are the facts: Tim and Steve both live in Pasadena and have weird-ass record collections with frequent overlaps. I mean weird-ass like Vachel Lindsay reciting "The Mysterious Cat" in 1931, just before committing suicide — and it doesn't get much more weird-ass than that. Each one's work is a personal and idiosyncratic exploration of systems — systems of construction, of communication, of cognition. Both invent and build their own musical instruments. They have identical birthmarks on the left buttock in the shape of Léon Theremin's right profile. (That last item is unconfirmed.)

What's certain is that they are two of the most unschmoozy artists I've ever encountered. They're happy to talk about their work, but shun the spotlight in favor of long hours in the studio — hours that are fantastically productive in both their cases. In spite of this, they seem to be everywhere ... well, almost everywhere. For a long time, Hawkinson was the most egregious example of the L.A. museumscape's "prophet without honor in his own land" syndrome. The lightbulb should have gone off in 1996 when Jay Belloli — the recently retired director of Pasadena's Armory Center for the Arts — curated "Tim Hawkinson: Ali Ikmnostw," but it wasn't until almost 10 years later when the Whitney came sniffing around that Howard Fox was able to persuade LACMA to do the right thing (the 2005 retrospective "Tim Hawkinson"). 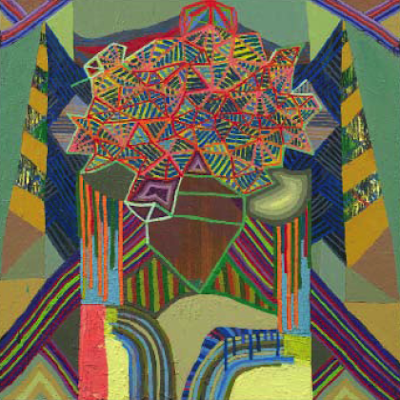 Now Belloli's left the Armory, Fox is free of LACMA and Steve Roden — who has been perennially jamming out stellar solo shows of his gorgeous painterly puzzles for Susanne Vielmetter Los Angeles Projects since 2003, while gaining international acclaim for his experimental music and sound art installations — is a front-runner for the most-egregious-prophet award. (Don't get me started on Jim Shaw and Jeffrey Vallance!) So what's the upshot? Fox curating "Steve Roden: In Between, a 20-Year Survey" at Pasadena's Armory Center for the Arts! Mere coincidence?"

See steve roden: in between, a 20 year survey at The Armory in Pasadena through january 9th

See steve roden: when words become forms at the Pomona College Museum of Art through december 19 (and Project Series 41: Ginny Bishton through October 17)

Note: I'm not sure if steve's actually caught "Up" but he should, and so should you.
Posted by DougH at 2:15 PM No comments: 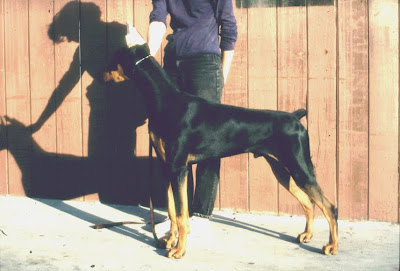 I lightened it up a little to see Dieter's head better.
Posted by DougH at 9:43 AM No comments: 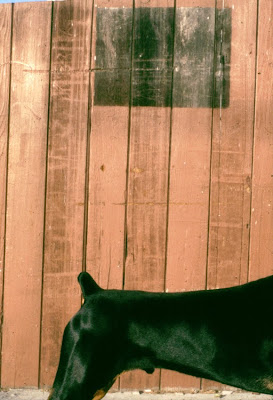 One of my best canine friends crossed the motherfuckin rainbow bridge last week, and everyone is very sad. Except Dieter (known to some as Spike), who is undoubtedly licking Reyna's butt in Puppy Heaven. Here's a selection of photos (and one typographical portrait) from the archives. I'll see if I can dig up more (including his senior nosework triumphs of the last couple of years) in the next week or so. 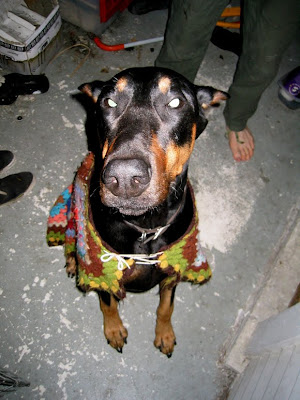 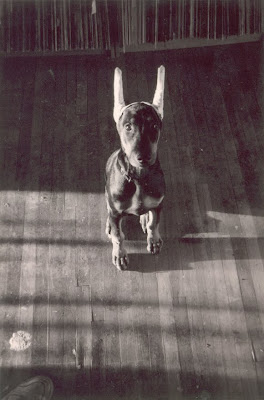 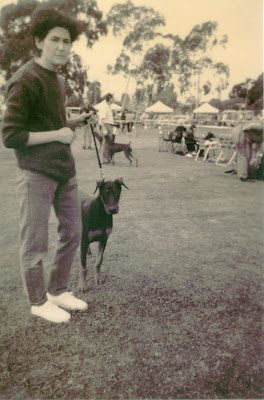 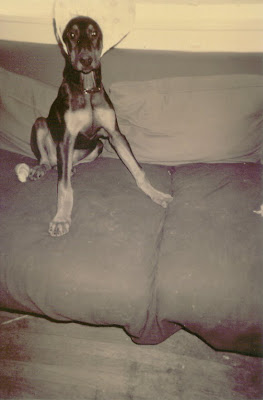 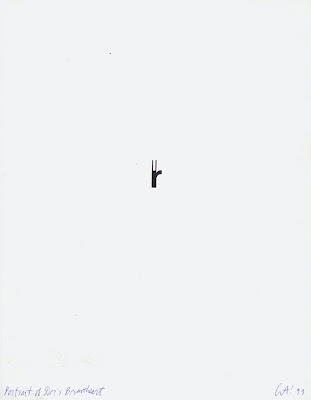 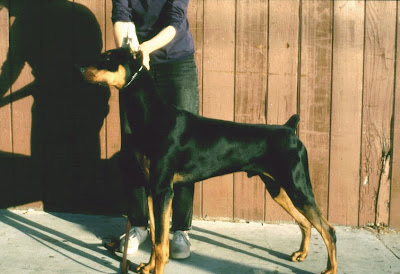 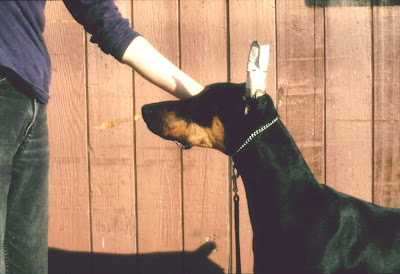 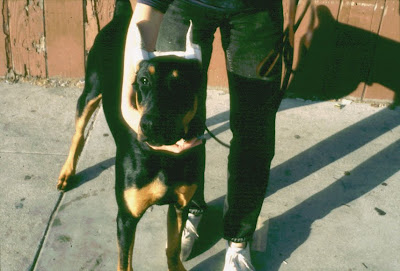 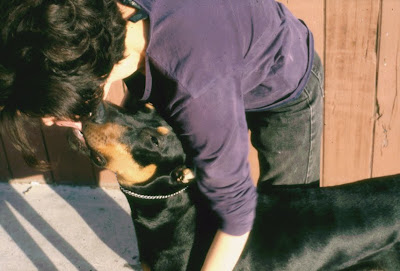 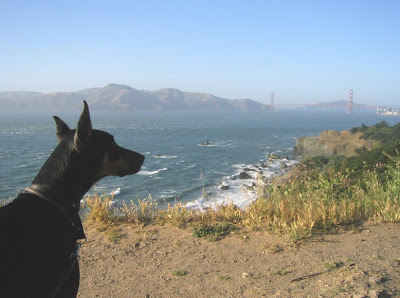 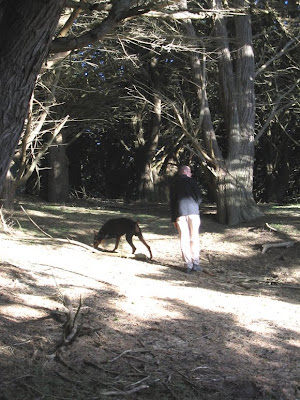 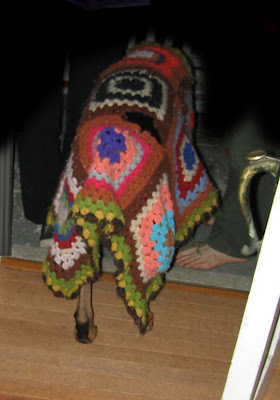 Read Kelly's eulogy over at Homegrown Evolution.
Posted by DougH at 6:43 PM 1 comment: 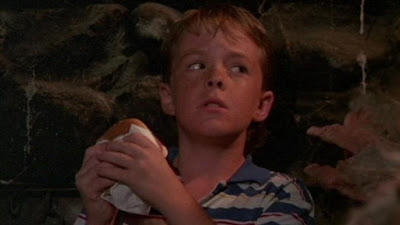 Thank God For Baloney! is the research archive of the Coalition for Cinematic Conservation and Preservation - Southern California Chapter (CCCP-SCC)'s ongoing Tribunal research project regarding allegedly "bad" cinema.
Posted by DougH at 3:20 PM No comments: