Will the Real Doug Harvey Please Stand Up? 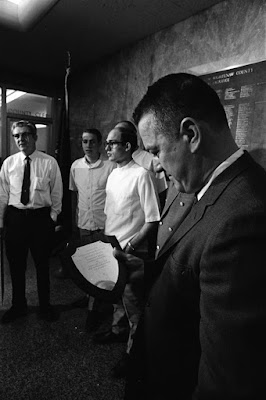 Sheriff 'Honorary Barber': Sheriff Doug Harvey examines a plaque which designates him an "honorary barber." The plaque, presented yesterday at the County Building, was given by Barbers Union Local 689. Harvey is defendant in a U.S. District Court suit in Detroit in which eight University students allege their constitutional rights were violated by haircuts given them during a brief stay in jail. Harvey is being sued for $200,000. The eight were arrested during a campus demonstration. Harvey promised to display the plaque in his office. Ypsilanti barber William Boatwright, who made the presentation, said the local's 94 barbers in the county "support Sheriff Harvey and his prevention of disease in the county jail."
Posted by DougH at 6:07 PM No comments: 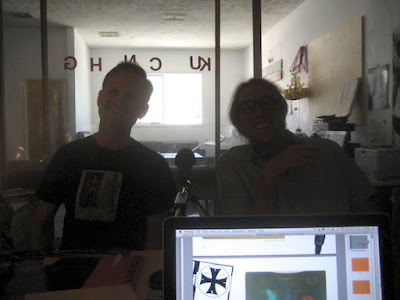 Apropos of tomorrow's opening of Afraid of Modern Living: World Imitation & Monitor 1977-1982 at These Days Gallery in downtown LA, I was looking for a blog entry where I linked to the episode of DOUG HARVEY's LESS ART RADIO ZINE featuring Michael Uhlenkott and Damon Willick discussing World Imitation and Damon's [San Fernando] Valley Vista exhibit, and I realized I never made one. Those were hectic times. So here it is, link is still good, the music riveting, the banter scintillating...