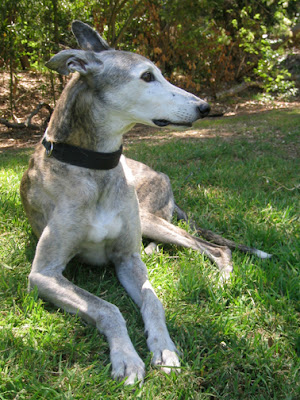 Albert had been bummed out since Reyna died last week, and last night he had a respiratory attack. He'd been getting these when he overheated but this time it didn't pass. We took him to the Emergency Animal Clinic in Studio City where he died around 2 AM. Later, Aligator.
Posted by DougH at 9:33 AM No comments: 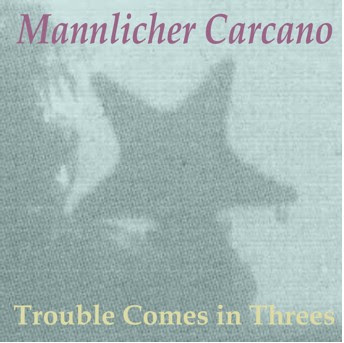 I've uploaded the entire 2 CD preview version of the Mannlicher Carcano anthology "Trouble Comes in Threes" including liner notes and covers to megaupload. Share it with some one you love.
Posted by DougH at 3:31 PM No comments: 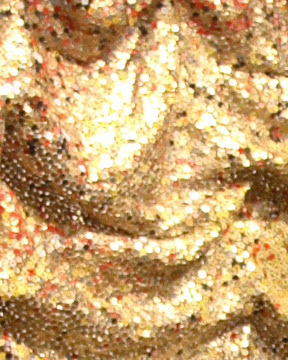 Ghanian/Nigerian sculptor El Anatsui garnered much praise at this year's Venice Biennale. Here's my take on his travelling survey show, currently at the UCLA Fowler Museum. This is a detail from "Skin of Earth," one of the artist's signature pieces assembled from thousands of flattened aluminum liquor bottle caps.
Posted by DougH at 10:05 AM 2 comments: 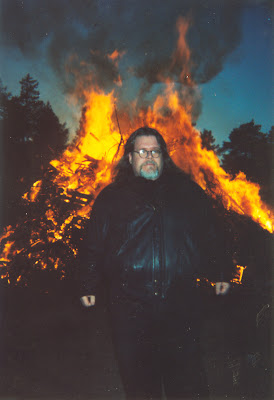 I realize I've been remiss in my postings here - I haven't even linked my last three LA Weekly columns. So I'll start with that. First, the always amazing Jeffrey Vallance's exhibit of autohagiographical reliquaries at Grand Central Art Center in Santa Ana... a good trip to combine with a visit to Laguna for the Griffin retrospective! This is a picture I took of jeffrey in Umea Sweden on Walpurgisnacht 2000!
Posted by DougH at 9:40 AM 1 comment: 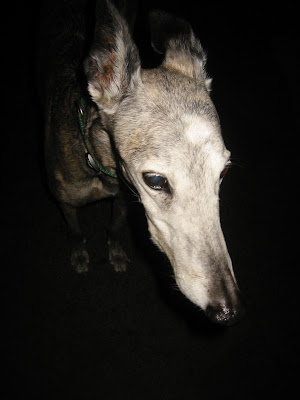 Our oldest greyhound Reyna passed on at home this Wednesday afternoon with the help of Dr. Liz Friedman. She had had a rough couple of days, but it was a very comfortable transition. Reyna was 15 1/2 and had outlived the rest of her abandoned litter, even though the folks at Hemopet thought she might be too far gone to rescue. She showed them.

When we first got Reyna, she was terrified of flags, automatic gates, stairs, etc. but she got more and more confident, eventually becoming adept at many competition obedience exercises. Although she never competed, she attended Mary Fry's legendary classes for 5 years, and supported Albert in his successful pursuit of his CD obedience title. She continued her obedience work right up into the last week of her life.

Among Reyna's other accomplishments were: donating blood to Hemopet for her year of post-rescue socialization; catching (and, with some encouragement, releasing) two wild rats while walking on lead when we lived on 7th Street in downtown LA; and appearing in a number of artworks, including posing (with Albert) for a 3D photographic tableaux vivant superimposed on the Vision of St. Eustace diorama in the Athanaseus Kircher exhibit at the museum of Jurassic Technology.

She was ethereally beautiful with frequently disgusting table manners, and kept her smarts and wicked sense of humor until her body gave out. She'll be missed very much. 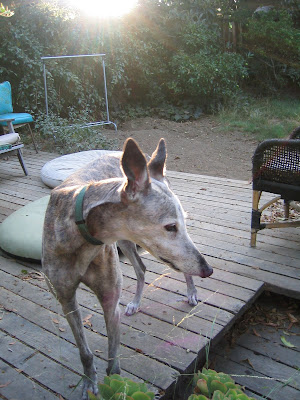 Sorry For the Delay 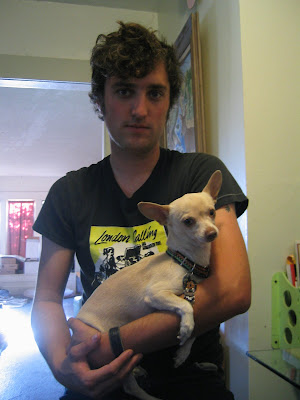 The cord for my digital camera fell down. But I found it. 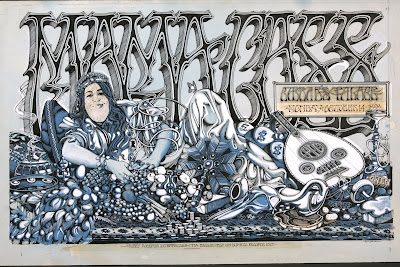 Original art for Rick Griffin's ultra-rare poster for Cass Elliott's disastrous appearance at Caesar's Palace in Vegas in October 1968. Holly Myer's review of the Griffin show in the LA Times. More soon.
Posted by DougH at 5:13 PM No comments: