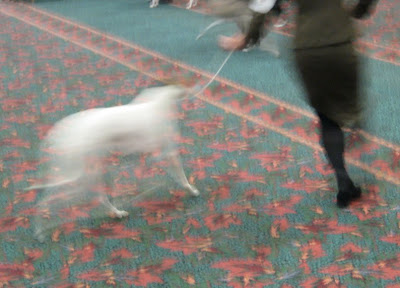 Portfolio made his debut at the American Whippet Club's 24th annual National Specialty last Wednesday at the beat but accommodating Hotel Tucson City Center Innsuites - though we were required to supply our own bedspread (but then you know what they say about hotel bedspreads - talkin bout an ultraviolet lightshow, y'all dig?) 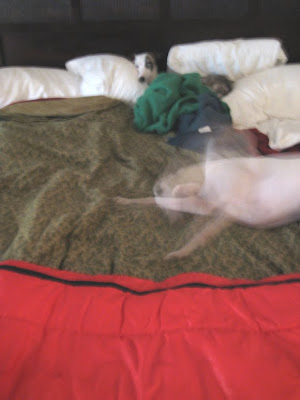 It was a fun - if exhausting - expedition, driving straight there and back in a rented minivan to participate in one out of the seven intensely scheduled days of competition. 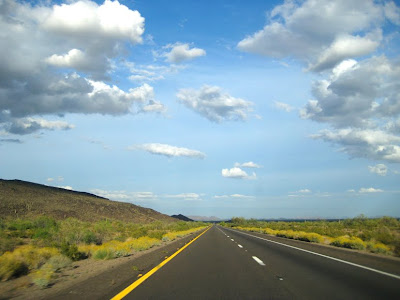 This was P's first appearance in the 'Open Dog' class, having left puppyhood behind at his 19-month birthday earlier in April. Apparently he failed to rock the judge's world - though admittedly the competition was worthy in this instance. P comported himself commendably, but was not ranked ribbon-quality. 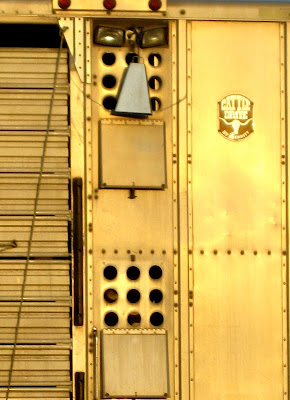 However, around noon on Thursday, just as we were getting ready to hit the road, Debbie Butt of Sporting Fields Kennel - whom we hadn't ever really met before - found us and asked if Portfolio could stick around to participate as part of his sire Trent's 'Stud Dog Unit' -- the competitive team in an event where a male dog and two of its offspring - his "get" - are judged as a group. 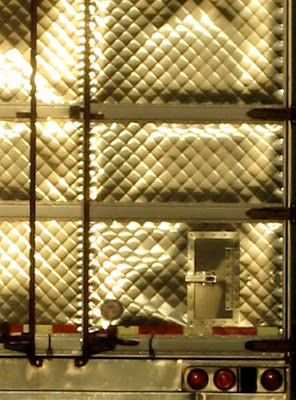 Somebody hadn't shown up and Portfolio was the only one of Trent's get there. Trent won the whippet group at Westminster in 2008, and the other get was Nigel's pa Hot Topic (AKA Sully) so it was an honor to be asked, and a chance to finally meet the stud that begat our personal whippet adventure. So - once we arranged for the Urban Homesteaders to save our real vehicles from an Asphalt Slurry Seal Protection mandated towage - we agreed. 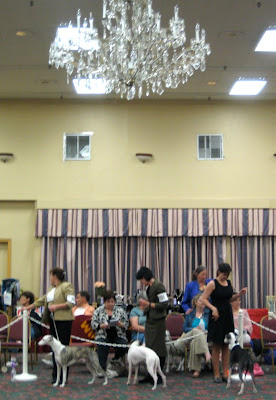 The line-up was a little confusing, because Hot Topic himself was entered with a stud unit of his own, so in the pictures you are seeing - left to right - Trent (Sporting Fields Rock On) with Debbie Butt, Portfolio with M.A., Sully (SF Hot Topic) with... handler - I'm sorry I'm not sure of any other names but I'm going to guess that Sully's l'il bitches are Broadstrider’s Cheers Me Dears (who went onto win Winners Bitch & Best of Winners on Saturday) and 2009's American Whippet Club National Best in Show winner Snow Hill Calliope -- correct me if I'm wrong, whippet community. OK it looks like it was Tattershall Ticket to Fly and Calli. I probably just made some unforgivable faux pas. The politics of the art world are nothing to those of breed conformation. 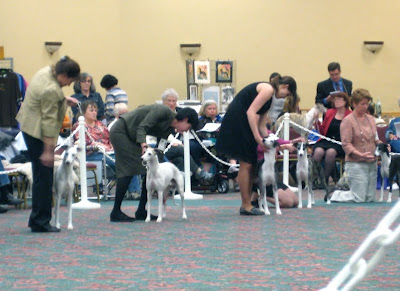 This was apparent in the buzz that Portfolio's (and MA's) presence evoked ringside, where I was shooting these blurry photos. I stood in three separate locations, and I overheard three separate conversations trying to figure out "Who is that magnificent white dog with Trent?"and "Isn't that owner/handler fine artist M.A. Peers, who did those space dog paintings for the Museum of Jurassic Technology?" as well as similar queries. 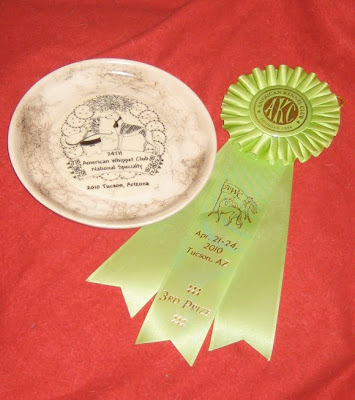 Thanks to his newfound experience, Portfolio showed enthusiastically but gave an impression of inner centeredness, suggesting Westminster triumphs to come. But not yet... not yet. In a genetic wormhole melon-twister, Nigel's Pa (and P's half-brother) Sully took the Stud Unit blue ribbon, and Trent came third. Debbie let Porlilfoo keep the green ribbon and horsehair-fired commemorative plate with the whippets in the sombrero, for going the extra furlong. And she can spare it - since her SF Bahama Sands (Tawny) got Best in Show! Congrats Debbie & Tawny! Can another Westminster triumph be far behind?

Those middle images are close-up shots of the backs of trucks on the I-10 as the sun was going down.
Posted by DougH at 6:23 PM 2 comments: 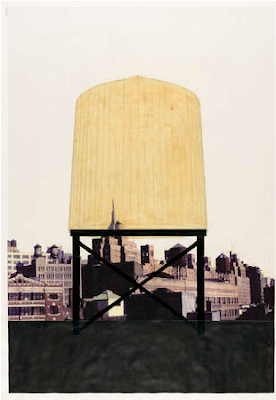 "For me, Rachel Whiteread has always been the most problematic member of the YBAs (the world-beating Young British Artists group led by Damien "Shark in a Vitrine" Hirst and sponsored by Charles Saatchi), if only because she is the most formally gifted of the lot, and the most openly and unironically indebted to modernist antecedents like minimalism, conceptualism and Arte Povera. I always found her work pleasant to look at, which is certainly more than I can say about Hirst, Tracey Emin and the rest of the faux-Duchampian blue-chip hacks of Albion. She does, however, share their notable lack of originality — which, due to indifference, amnesia and the marketing muscle power of Mr. Saatchi, proved no impediment to marketplace saturation and global critical accolades...."

Read the rest of The Power of Negative Thinking here. 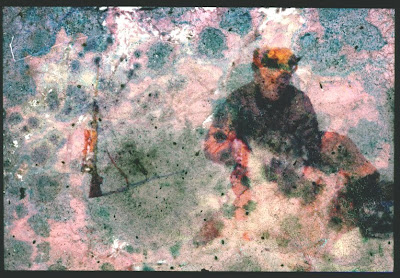 Check it out - I'm a movement! Part of one, anyway:

"One of the most exciting things about hauntology, I think, is that it’s possibly one of the first aesthetic movements in quite a while to see some very specific equivalence in technique between sonic and visual art. I’d been looking long and hard for a visual counterpart to the music of The Caretaker, William Basinski and lately Indignant Senility – I knew one definitely existed, it was just a matter of finding it – when I suddenly found a postcard of an image from one Doug Harvey yesterday."

In & Out of Commission 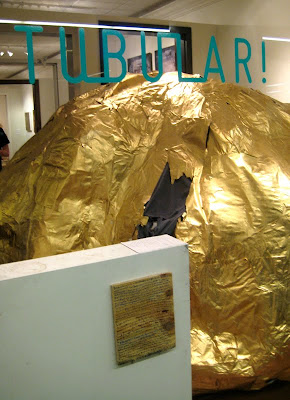 Greetings everyone. Apologies for lack of posts but I've been swamped with various projects ranging from curating the Tubular! show at the Pacific Design Center to a lengthy (double what I thought when I finished it the first time) essay on the films of Marnie Weber, some forthcoming LA WEEKLY columns, editing an anthology of Patacritical Interrogation Techniques for AC Institute, remastering The Charles Ray Experience's Hooked on Dialectics for release on Pleonasm Music, a Mannlicher Carcano/Flugeldar! gig at the Echo Curio supporting John Kilduff, and a visit from my sister and niece. Mostly though I've been knocked flat with a wicked upper respiratory flu: rattling with pneumonia, hawkin' up the fluorescent green quarter-pounders, and hallucinating with fever. How did you spend your Spring Break?

I hope to post on all the above topics shortly, but in the meantime, here are a couple of Tubular! images. Above is a view through the front window during the opening performance -- Eamonn Fox and Patrick Ballard inside a giant gold paper-mâché ball, gradually drinking a case of beer, punching holes in the ball from inside, then stripping off their clothes to plug the holes. When they were completely naked, they smashed out of the gold egg and wandered off into the history books. I actually missed the hatching because I was at an adjacent opening, witnessing Roger Herman giving the Hitlergruß and yelling "Sieg Heil!" at the PDC security guards. Twas a night to remember. If anyone got stills or video of either performance, please contact me. Below, Fox's Burlington Coat Factory painting. 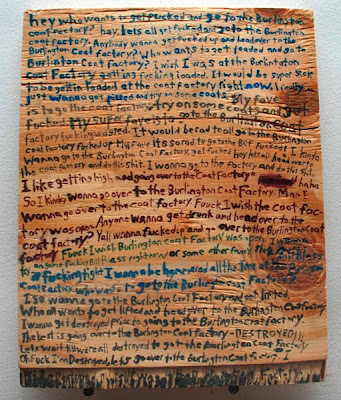