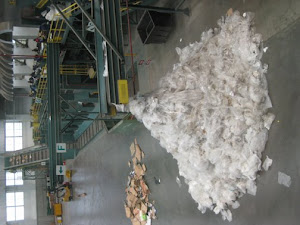 "Titled A Trip to the Dump, this was perhaps the shortest excursion ever organized by CLUI – 20 miles east on the freeway to Puente Hills in Whittier, site of the largest active landfill in America. Passengers who had braced themselves for an olfactory-challenging immersion were not disappointed by a brief side visit to the Central L.A. Recycling and Transfer Facility — a somewhat decrepit way station just southeast of downtown, where a constant almond-scented misting did little to inhibit the reek of garbage as it was dumped and plowed and dumped again.

Puente Hills itself is another story. "People say, 'Solid waste management is a dirty business,'" proclaims the County Sanitation District Disposal Site's glossy brochure. "We say, 'Rubbish!'" Carefully designed to be invisible and unsmellable to the neighboring communities, Puente Hills carefully choreographs the constant stream of trucks to sort your asphalt from your appliances, then crushes each day's worth of bona fide trash (13,200 tons to be precise) into football-field-sized "cells" using the 120,000-pound steel-wheeled Bomag compactor. Seven regulatory agencies engage in elaborate monitoring for radiation, ground water safety and habitat protection. The facility uses methane gas leached from the fermenting trash to fuel its fleet of vehicles, and processes recovered wastewater for dust control and maintaining the landfill's indigenous flora camouflage and oak tree nursery. Though we saw numerous breathtaking industrial vistas, we garbage-tourists probably saw more actual trash at the downtown Transfer Facility than in Puente Hills' 400 acres. Until we got inside the Materials Recovery Facility (MRF).

Immaculate and efficient as it is, the landfill will be chock-full by 2013, which is when the trash train to Mesquite kicks in. Central to this vision of the future of solid-waste management is the MRF (pronounced "Murph"), a hangar-sized building where small mountains of refuse are gradually broken down into smaller mountains of desert-bound landfill and recyclable materials. The mixed recyclables are loaded onto conveyor belts to be picked over and sorted by mostly female, nonunion, minimum-wage laborers. This was the hypnotic money shot of CLUI's Trip to the Dump: the layered, ethically queasy view from the elevated spectator's gallery as thousands of white plastic bags or brown cardboard boxes were continuously plucked from their industrial routing mechanism, cascading to the floor into improbably gorgeous sculptural forms. I kept half-expecting Matthew Barney to pop out and do a tap routine; the DIA Foundation definitely needs to get in on this action. If Earthworks has a future, this is it."

Read the rest of 'Wading in The Waste Stream with The Center for Land Use Interpretation' here.

Above, my photo of the mound of white plastic at Puente Hills' Materials Recovery Facility. I also just uploaded my first youtube video of the same pile. Did you know that the hole's only natural enemy is the pile?
Posted by DougH at 5:19 PM No comments: 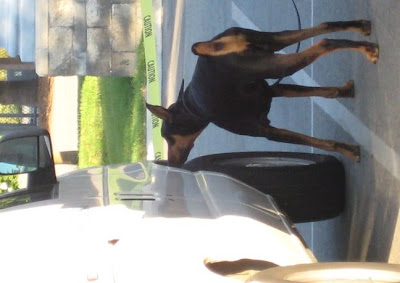 I was recently fortunate enough to attend the Inaugural Fun Nose Work Competition held at spcaLA in Long Beach. Fun Nose Work is "the next urban sport for dogs" and builds on the same techniques used to train bomb and narcotic sniffing canines, using progressively more complex searches for Q-tips scented with birch or anise oil (at least so far). It's amazing to observe another consciousness negotiating an entire sensory realm about which our species has only the faintest inkling. Above, Dieter (AKA Spike) nails the vehicle search. 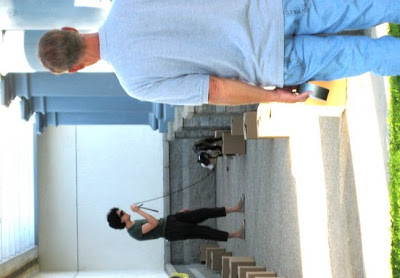 This is a brand new recreational dog activity that has sprung up in the LA area under the auspices of Fun Nose Work, founded by former K9 police dog trainer Ron Gaunt, spcaLA Director of Behavior and Training Jill Marie O'Brien, and and independent trainer Amy Herot. Above, Ron marvels at Nigel's near-record of 13 seconds in the box search. 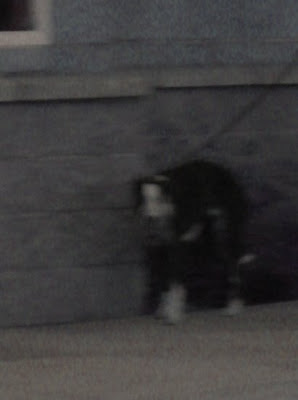 All was not fun and games though, as a ravenous chupacabra slunk along the facility perimeter as dusk fell. There were no incidents, however. Nigel finished on the 1st place team and Dieter was on the 2nd. The complete results and more pictures are available on the Fun Nose Work website.
Posted by DougH at 3:50 PM No comments:

Hole on the Horizon 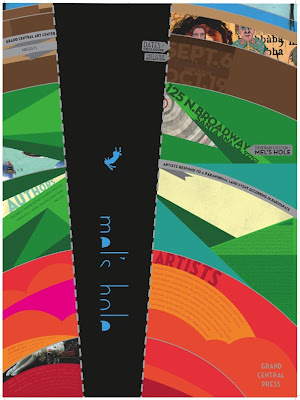 Here's a more legible version of the poster/bookjacket for the Mel's Hole show, with information on the opening and the location of GCAC. Just click on the image to see a larger version.The artists-in-residence Cathy Ward and Eric Wright, have arrived and started accumulating material for their Hole work. 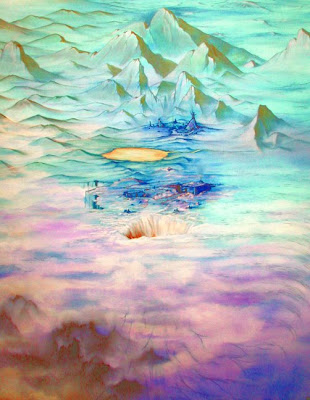 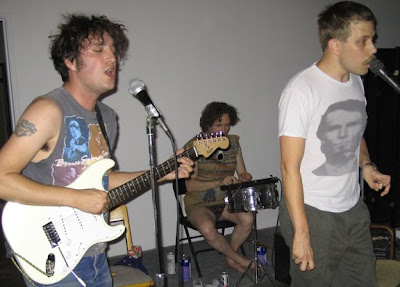 Fireworks performed another impressively extemporaneous set this last Friday at High Energy Constructs, ably supported by The Bushes, Falcon Eddy, and Wounded Lion. A digital recording was made, but the device was set for the lowest-quality "dictation" mode, and the results are reminiscent of a poor-quality cassette bootleg from the 70s. Which isn't necessarily a bad thing - Wounded Lion comes through particularly well. We'll look into sharing the roughest version of "Carol Cloud" ever. In the meantime, here's Firework's radical new arrangement of their classic "Grammar School Teacher" made even more abstract by the unplanned lo-tech processing.
Posted by DougH at 5:59 PM 3 comments:

Not in Ellensburg Anymore 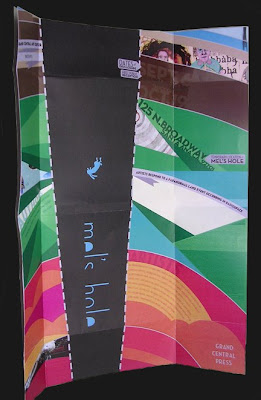 Here's the first glimpse of the catalog for my upcoming curatorial extravaganza 'Aspects of Mel's Hole: Artists Respond to a Paranormal Land Event Occurring in Radiospace' opening Sept 6th at the Grand Central Art Center in Santa Ana. It's an elaborate folding dustjacket for the hardcover tome, and doubles as the poster for the show. It was designed by Wendy Peng.

Those needing a refresher as regards the Big Story should listen to this.
Posted by DougH at 11:55 AM No comments:

Review Catchup 2: Peter Saul Not at MOCA or MOMA 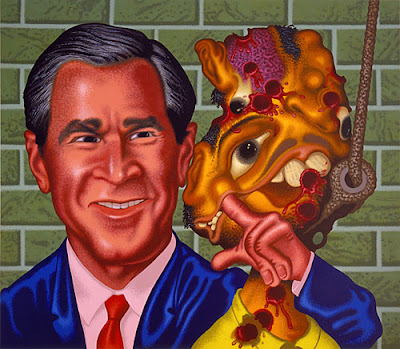 "Saul’s penchant for the blasphemous, sexually explicit, ultraviolent needling of authority figures pretty much accounts for why this is only his third solo survey show in America. Over the past couple of decades, he has vented a good portion of his spleen on art-world icons: a self-portrait taking a shit in Duchamp’s iconic urinal, innumerable piss-takes on 19th-century history paintings, and — most ill-advisedly — a series of uncommissioned portraits of prominent art critics. These began with Minimalism cheerleader Barbara Rose in 1963 and culminated with the transgendered, self-penetrating (with a paintbrush!) Clemunteena Gweenburg (1971) — though the artist continues to poke occasional cruel fun at this most misunderstood, embattled and unappreciated segment of the art world (Oh! Do me! Do me!). 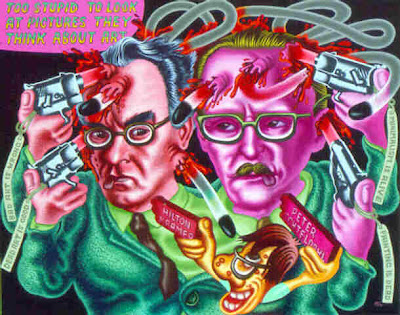 No examples from this particular series of broadsides made it into the current retrospective at the Fashion Island–adjacent OC Museum of Art, though there are always plenty of digs at art stars like De Kooning and Picasso — Saul even takes on Francis Bacon and Duchamp in a single painting. Ironically, it was these kinds of satirical half-homages that initiated Saul’s rehabilitation in the mid-’80s, and they are the works for which he remains best known. 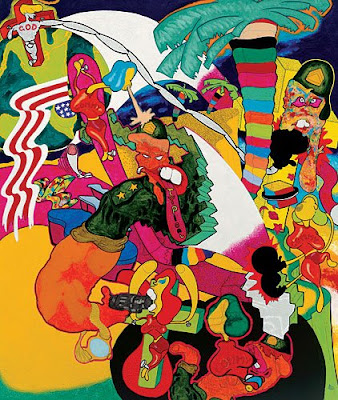 Which is the single most melon-twisting aspect of this act of institutional redemption, since Saul has always been, for me, one of the two or three best painters of the original group of artists labeled Pop in the very early 1960s, when his work (with its jumble of consumer goods rendered in exquisite but skeptical recovered naiveté) looked like a mash-up of De Kooning, Dubuffet and Richard Hamilton. While Warhol was arguably more economical in charting the trajectory of painting’s eventual (if not ultimate) disappearance up its own arsehole, in the end he was better at drawing lines than he was painting. Lichtenstein and Rosenquist? Fuggedaboudit. Good painters with great shticks ... and timing. Saul’s painterly peers in the early Pop era were crackpot Europeans like Öyvind Fahlström, Sigmar Polke (pronounced pokey) and Gerhard Richter (pronounced Gumby), and L.A. transplants Hockney and Kitaj. All of whom went on to blue-chip currency. Except for Fahlström, who shared Saul’s inability to refrain from direct commentary on America’s habit of global imperialism. Mere coincidence? Perhaps ..." 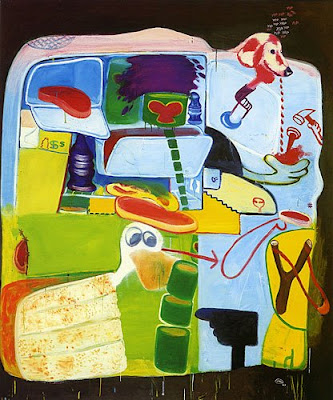 Review Catchup 1: Rauschenberg Not at the Huntington 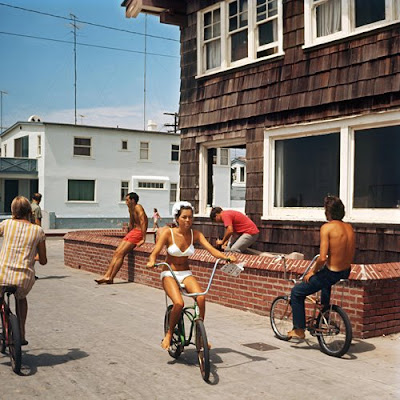 "I’ve been thinking a lot about Rauschenberg lately. But I’ve always thought a lot about Rauschenberg. For my money (I wish!), he was and remains the unsurpassed master of visual language in the modern era; his seemingly effortless improvisational command of semiotics was exceeded only by the richness, intricacy and originality of his formalist skills. Treating information as material, he translated Dadaist collage into the idiom of painting; painting into sculpture; then flattened the whole menagerie into a dense and simultaneous info-pancake of silk-screened magazine clippings that stripped pictorialism and narrative linearity down to their bare wires.

If that weren’t enough, he was a dyslexic homosexual drunkard —all top-shelf people in my chest of drawers. Rauschenberg was Ernie to Jasper Johns’ Bert — expansive, self-indulgent, mischievous and visionary. And while Johns’ academy-friendly visual vocabulary is more finely tuned, Rauschenberg was in a state of continuous eruption, spewing forth a torrent of picto-glossolalia that offered a new way to look at the world. Looking at the world was, in fact, Rauschenberg’s specialty. The first artworks he sold to a public collection were a pair of photographs Edward Steichen bought for MOMA in 1952 — years before Rauschenberg’s paintings were taken seriously. He always took brilliant photographs, and his own self-appropriated snapshots came to dominate his image morgue.

Rauschenberg’s photography was central to his practice though not particularly lauded within the field. Nevertheless, lately, it’s seemed to me that his pop-alchemical formalist legacy is more evident in the work of contemporary documentary photographers than among painters (or performance artists, for that matter — printmakers and designers more so). Maybe it’s just my personal fixation on Rauschenberg’s epiphany, but he seems to me to be the absent hub at the center of the Huntington’s This Side of Paradise: Body and Landscape in Los Angeles Photographs — a surprising outburst of world-class curatorial practice from an institution whose arcane tweediness has always been one of its main attractions."

Read the rest of 'Polterzeitgeist: Bob Rauschenberg Haunts The Huntington' here.
Posted by DougH at 4:34 PM No comments: 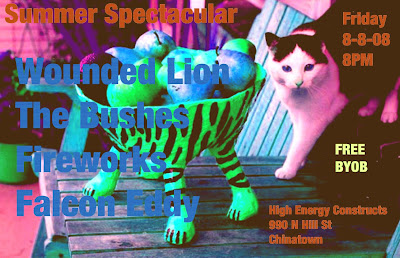 Guess I'll be pounding the skins or something. Only drummer left in the city who won't be at the tarpits. More posts shortly.
Posted by DougH at 11:58 PM No comments: 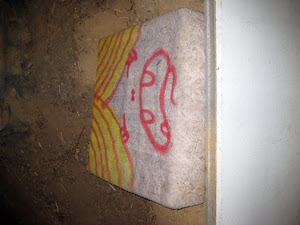 As promised, I have dug out the backup camera to document the most interesting painting I've seen in a while, certainly the best street art I've seen in ages. And, as you can see from this supplementary photo, it's got wheels, for the au go-go lifestyle of the new homeless middle class! And you can't beat the price. Now that I've made it famous, it can be collected from the corner of Waterloo and Sunset, where the Higher Path burned down. 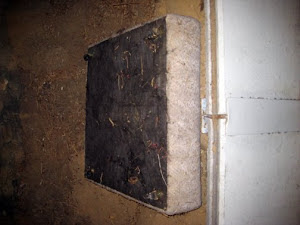 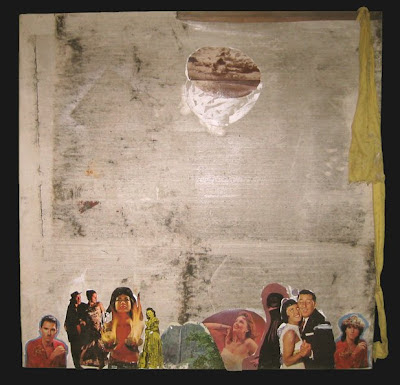 Today is the last day for The Black Dragon Society, the gallery that jump-started LA's Chinatown art scene 10 years ago. Founding artists Roger Herman and Hubert Schmalix (with "silent partner" Chris Sievernich - producer of Wim Wenders' 'Paris, Texas' and John Houston's 'The Dead') oversaw BDS' transformation from a funky and intermittently open DIY party space to a jet-set hub in the international artworld youthquake of the 00s, enabled by gallery director Parker Jones (who is opening his own eponymous space with a reshuffled BDS stable). For some reason, Roger invited me to put something in the show, so I included the above Pre-Rotted ® "painting" entitled 'Hanky Code.' The wake is scheduled for the gallery's normal 11 - 6 but I'd be surprised if it didn't run a little overtime.
Posted by DougH at 10:43 AM No comments: 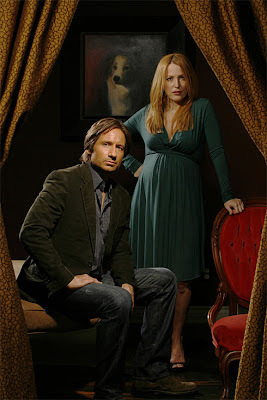 I don't think I've ever watched an entire episode of the X-Files, but Gillian Anderson was great in 'The Last King of Scotland' and you gotta love Duchovny as the tranny FBI agent in 'Twin Peaks' and as the serial killer hipster fetishist who learns his lesson but good in 'Kalifornia.' Rounding out this admirable CV, the pair recently posed together in front of the missus' portrait of Soviet muttnik Strelka while offering their pithy insights into the mysteries of the Museum of Jurassic Technology. Truly these are the End Times.
Posted by DougH at 7:22 PM 1 comment: