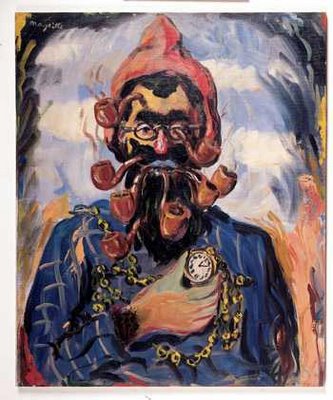 Here's my review of the Magritte & Contemorary Art show at the LA County Museum of Art. It's been online for a week, but the paper version just hit the streets today.

Pictured above is "The Cripple" from Magritte's very brief "Vache" period in 1948, when he abandoned his familiar style and made all these loose, goofy paintings. They're the highlight of the show for me.
Posted by DougH at 8:33 PM No comments: 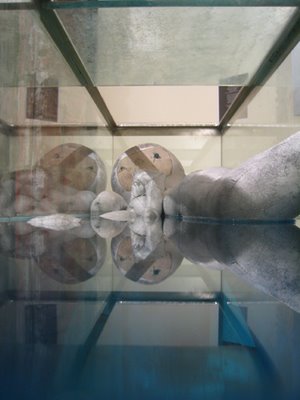 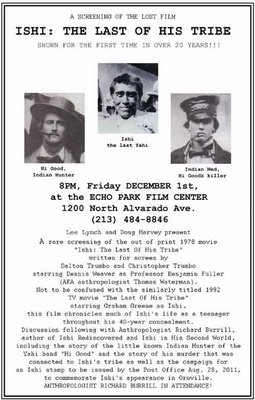 Lee Lynch and Doug Harvey present a rare screening of the out of print 1978 movie "Ishi: The Last Of His Tribe" written for screen by Dalton Trumbo and Christopher Trumbo and starring Dennis Weaver as Professor Benjamin Fuller (AKA anthropologist Thomas Waterman). Not to be confused with the similarly titled 1992 TV movie "The Last Of His Tribe" starring Graham Greene as Ishi, this film chronicles much of Ishi's life as a teenager throughout his nearly 40-year concealment.

Discussion following with Historian Richard Burrill, author of "Ishi Rediscovered" and "Ishi in His Second World" -- including the story of the little known Indian Hunter "Hi Good" and the story of his murder which involved Ishi's tribe. Plus sign the petition for an Ishi stamp to be issued by the Post Office Aug. 28, 2011, to commemorate Ishi's appearance in Oroville. ANTHROPOLOGIST & AUTHOR RICHARD BURRILL IN ATTENDANCE!