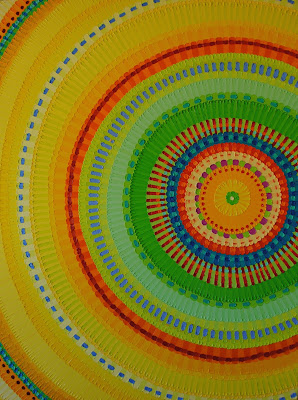 My latest catablog entry for "practice,Practice, practice," highlighting the work of June Edmonds -- this weekend is your last chance to see this potent mix in the flesh -- don't miss out!

https://abstractspiritual.blogspot.com/2016/04/june-edmonds-circlecurve-series.html
Posted by DougH at 1:35 PM No comments:

If you're in the Los Angeles area and in the mood for a different sort of performance art, swing by the Nan Rae Gallery at Woodbury U in Burbank tonight at 8 for an unusual line-up of LA-based performers, in conjunction with "practice, Practice, practice: Abstract Spirituality in Los Angeles Painting, Sculpture and Performance" curated by Doug Harvey.

This evening's unique offerings include Mary Anna Pomonis' blindfolded abstract painting ritual dedicated to the Sumerian Goddess Inanna, a demonstration of advanced yoga asanas by Khang Bao Nguyen accompanied on the mouth organ by Joana Ayala, who will also debut a new body of solo vocal work channeling a divine feminine archetype called MAGA. The evening will conclude with a drone chord organ improvisation by Dani Tull. It promises to be a memorable evening! 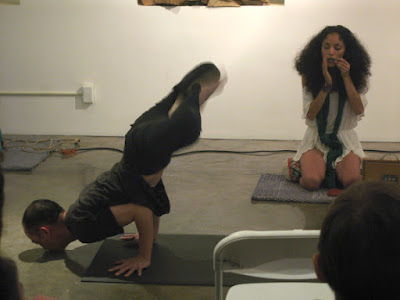 Jim Shaw: The Dreams That Stuff Is Made Of

"A monochromatic Ionic column emerging from the head of a bearded, twinkly-eyed pagan entity; a bas-relief depicting a giant juvenile delinquent coiffure morphing into a werewolf;  a classroom physiology chart showing a human gastrointestinal tract augmented by six golden trumpets; a poster for a children’s movie about anthropomorphic cake slices visiting Paris; a collage depicting Peter Lorre’s old green head as the moon over a tangled greyscale landscape of hot nudes. How could all this material be dumped by one powered-down cortex?

I’ve heard it suggested on more than one occasion that Jim Shaw’s Dream Drawings and Dream Objects must be some sort of fabrications -- that nobody has dreams that intricate and reference-laden, let alone remember it all. While it would be correct to assume that I  -- as the critic who has probably spilled the most ink regarding Jim’s work   over the years -- share some deep affinities with his idiosyncratic modus operandi, I can’t prove that Jim’s sleeping visions are the real source of the drily repertorial graphic narrative drawings and flamboyantly variegated multi-media objects that bear that designation.

What I can attest to is that some people do dream and remember in the abundance of richly aesthetic, convolutedly narrative, and absurdly humorous detail that Jim’s Dream work conveys -- because I myself have been blessed and afflicted with the same superfluity of nocturnal emissions -- although I have an excuse: I was a grand mal epileptic between the ages of 13 and 23, so my wiring is configured according to some souped-up electroconvulsive template.

My last seizure was in my first year at art school, in the library, looking at a thumbnail magazine reproduction of one of Richard Prince’s appropriated cigarette cowboys, thinking I wanted to rephotograph the tiny B&W image, blow it up and present it as my own work. A trapdoor of infinite regression opened in my brain, and I fell through -- past uncountable reappropriations of Marlboro men, into darkness. It would make an excellent Jim Shaw piece!

I’m not suggesting that you have to have electrical storms in your brain to appreciate Jim Shaw’s work (but it helps yuk! yuk! yuk!) In fact, my understanding of this sort of electrochemical difference is that it’s just a slight shift to the side of most peoples’ normal waking consciousness -- which accounts for the tremendous broad spectrum popularity of Shaw’s work across popular culture, the artist’s peers, academia, and the marketplace. Because at some fundamental level, we all recognize that, as Aldous Huxley suggested in “The Doors of Perception,” our minds function as filters, stepping down the torrent of sensory stimuli and ideations to a manageable trickle. Art is the place where it’s safe to open the spigot..."

Read the rest of "The Dreams That Stuff Is Made Of" in the catalog for "Rather Fear God"
current exhibition at Praz-Delavallade & Vedovi in Brussels, Belgium

Ross Lipman, the legendary film restorationist responsible for preserving the cinematic legacies of Bruce Conner, Kenneth Anger, John Cassavetes, and a cluster of forgotten American neorealist gems including “Killer of Sheep” and “The Exiles,” has turned his attention to a more high-profile form of film history with his expansive examination of Irish literary genius Samuel Beckett’s sole foray into the movies --1965’s short silent narrative “Film,” starring Buster Keaton in one of his final screen roles.

Lipman takes a notoriously opaque 20 minute wordless black & white philosophical chase scene, and unpacks two hours worth of historical context, biographical insights, conceptual musings, and structural poetics into “NOTFILM” (2015), his complex and moving documentary -- also black and white, but rarely wordless (except to emphasize the gorgeous score by Bela Tarr’s main man Mihály Víg). While there’s plenty of down-to-earth making-of grit to feed the viewer’s narrative appetite, the heart of the story is Beckett’s and Keaton’s respective takes on being and nothingness, and who gets to watch.

Charged with the restoration of the avant-garde milestone, Lipman developed a fascination for the work, with its reflexive implications about the ethical and psychological dimensions of cinema, and it’s curious identity as the meeting ground for two diametrically opposed but deeply similar geniuses of 20th century culture. Not to mention cinematographer Boris Kaufman -- Dziga Vertov’s baby brother, and cameraman for all three of anarchist Jean Vigo’s celluloid masterpieces.

Lipman appears to have developed his obsession just in time, as several of the participants -- particularly Beckett’s go-to actress Billie Whitelaw and Grove Press publisher and “Film” producer Barney Rosset (both creative titans in their own departments) are themselves teetering on the brink of the Void in their interview segments. Rossett, whose flickering memories of a missing prologue to the Beckett short sparked Lipman’s passion, was the source of the missing footage as well as surreptitious audio recordings of the pre-production meetings. These are pretty great, but there isn’t enough to them to justify a feature length deconstruction.

Luckily, Lipman’s scholarship and curiosity are up to the task, and ultimately wind up overshadowing the archival snippets to be the elements of this layered scholarly collage that stick with you after the curtain falls. The balance tips the other way in “Art of the Prank” Andrea Marini’s long-awaited career-spanning overview of the disruptive antics of media prankster Joey Skaggs, whose work holds a mirror up to his medium in a more interventionist way.

It’s not that there’s any lack of historical context, biographical insights, etc. (although there is a scandalous absence of art critical commentary) -- but the wealth of historical documentation delivers the real meat of Skaggs’ practice, next to which any discursive analysis pales. “Art of the Prank” also contains a doozy of a structural poetic as its major plot device -- following the artist through the trials and tribulations of his latest leger-de-brain, which involves stem cells, GMOs, and the very film that is tracking its devious development.

Since the late 1960’s, Skaggs has been planting absurd fake news events into the mainstream media -- often staging elaborate theatrical hoaxes with actors, sets, fake websites and business cards and press releases -- only to pull out the rug at the peak dramatic moment -- to the consternation and embarrassment of the infotainment professionals. Usually the only recourse for big media is to exact revenge through unflattering or distorted profiles (with a muttered retraction of their journalistic sloppiness tacked on somewhere) -- which is why this fair and balanced account is so welcome.

Skaggs’ conscious practice as a media hoaxster dates back exactly 40 years to April Fool’s Day of America’s Bicentennial year, when he dramatically revealed the fictional nature of his highly publicized “Cat House for Dogs” in court, having been subpoenaed by the Attorney General of the State of New York. That moment was captured on video, and is included in “Art of the Prank” along with archival documentation of the diet-enforcing mercenary Fat Squad, the Fish Condos, Celebrity Sperm Bank, Dog Meat Soup, WALK RIGHT!, Dog Meat Soup, Maqdananda the Psychic Attorney, and Skaggs’ heroic attempt to windsurf from Hawaii to California.

Many of these have unique underlying social or political content -- the subtle critique of the justice system built into The Solomon Project, which allegedly used an NYU law school computer program to find OJ Simpson guilty of murder, for example. But together they comprise a sustained multivalent attack on a culture that nurtures, sustains, exploits, and even enforces the gullibility of the public. One aspect of the story that this film brings to light is how Skaggs’ deceptive practice evolved directly out of young Joey’s frustration at the sluggishness and lack of autonomy in his chosen field as a visual artist. The entire symbolic ocean in which we swim, which most of us take for reality, is revealed to be a fabrication. Or as Joey puts it “If I believe that, what else do I believe that’s total bullshit?”

Art of the Prank screens in LA April 10th at 8 PM presented by Slamdance Cinema Club at the Arclight Hollywood
http://www.artoftheprank-themovie.com/screenings/