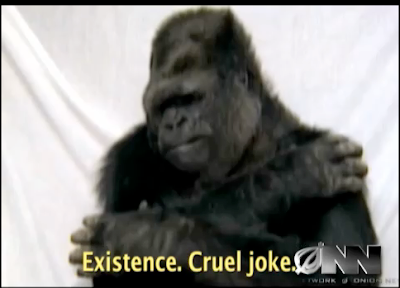 The Onion: Scientists Successfully Teach Gorilla It Will Die Someday
Posted by DougH at 1:51 PM No comments: 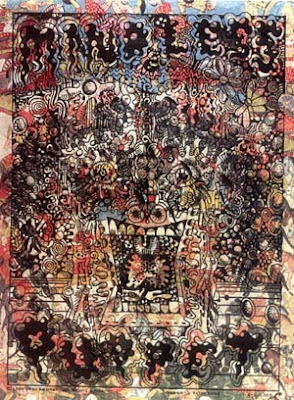 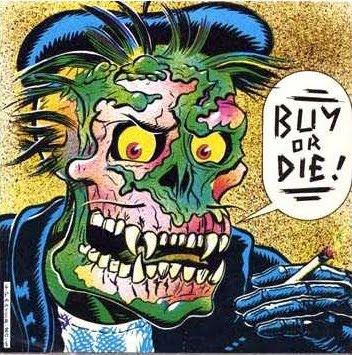 Print media still has some usefulness! [from the 1951 comic If an A-Bomb Falls, online along with many other helpful educational graphic narratives at Ethan Persoff's website] Not to mention the Color Wheel of Destruction! 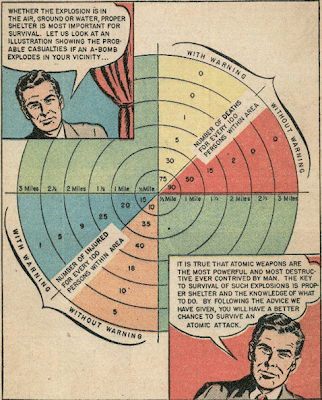 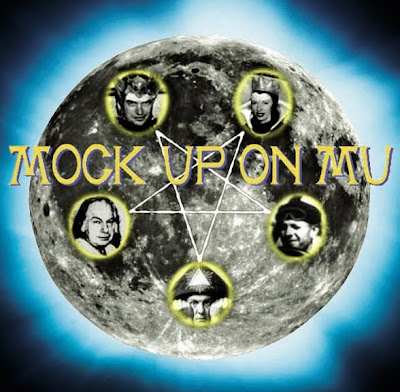 "There seems to be a rising tide of regionalism in the L.A. art scene, or at least a renewed interest in examining the city's cultural history, maybe because — as recent funding threats to the Department of Cultural Affairs suggest — the past is more promising than the future. While proprietary nostalgia for the Ferus Gallery era seems to have reached an epidemic level (Go, McKenna!), institutional historicizing almost inevitably excises the spirit of the original milieu it's trying to document — especially so in the case of the anti-establishment insurrections of the Beats, Hippies and Punks.

It's rarer still to come across a documentary presentation that is not only faithful to the spirit of such subcultural topics, but incorporates and expands on the formal and conceptual underpinnings of the tradition in question. One such rarity is Mock Up on Mu, the recent feature-length experimental film by Bay Area archivist and auteur Craig Baldwin, which screened recently at the Echo Park Film Center, and which has just been released on DVD.

Mock Up on Mu recounts (and embellishes) one of the juiciest and most unlikely bits of Angeleno mythology: Scientology honcho L. Ron Hubbard's collusion (as an undercover agent for Naval Intelligence, we are assured by both church spokespersons and Baldwin) with Jack Parsons — inventor of solid rocket fuel, founder of the Jet Propulsion Lab and Aerojet, and disciple of English occultist Aleister Crowley — to impregnate future Beat icon Marjorie Cameron with the antichrist ... or something. The original story is garbled enough, with Hubbard eventually fucking off with Parsons' girlfriend, yacht and bankroll, and Parsons subsequently marrying Cameron and blowing himself to smithereens while experimenting in his garage laboratory at his family's Pasadena mansion.

Or perhaps not. In Baldwin's hands, the future ain't what it used to be. The year is 2019 and both Hubbard and Parsons ("Though he looks 39, he's really 105 years old!") appear to have faked their own deaths, while Cameron has had her memory erased on Hubbard's moon base and is being prepped to go undercover and seduce key members of the American defense industry — including Parsons. And that's just the beginning! Baldwin tells the story with a combination of low-budget overdubbed live-action sequences and his signature barrage (as in 1991's conspiracy-theory overload Tribulation 99) of found and appropriated clips of movies, television and advertising, with a further layer of collaged dialogue and music.

The narrative architecture is a similar pastiche, incorporating philosophical and spiritual rants; science, history and philosophy lessons; flights of absurdism and fantasy; and numerous biographical sidebars pertaining to the principals — including Cameron's appearances in Kenneth Anger's Inauguration of the Pleasure Dome and her seminal role as the artist whose drawing precipitated the obscenity bust of Wallace Berman's 1957 show at the Ferus Gallery.

Which, as we all know, triggered Berman's move to San Francisco and his hooking up with Bruce Conner, who taught Baldwin how to make dazzling, poetic cinematic collages out of found footage. Mere coincidence?..."

Read the rest of Locals Only: Changing the System From Within here 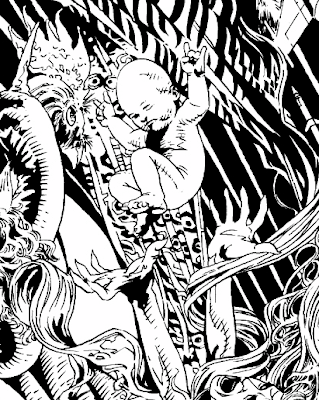 And read The Marvel: A Biography of Jack Parsons by Richard Carbonneau & Robin Simon (detail above) here.
Posted by DougH at 11:13 AM No comments: