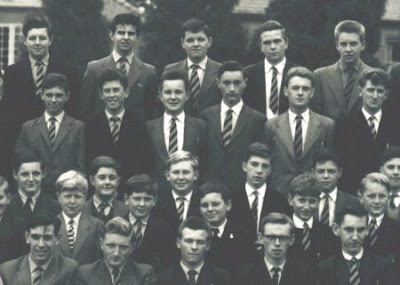 In one of the most perfect moments of revisionist creative discourse in recent memory, LA-based culture blog Frenchy But Chic has abandoned Art commentary and critique in favor of directing our attention to a different weekly youtube video of John Cale performing a song from his extensive oeuvre. It seems so obvious! Wish I'd thought of it first. The second-greatest genius to emerge from the Velvet Underground (after Moe Tucker of course), Cale is a brilliant songwriter and performer as well as being the missing link between the avant-garde minimalism of LaMonte Young and the vast array of non-academic noise and drone music produced globally today. Cale's performing at UCLA's Royce hall on September 30th. He is pictured in the lower left corner of the above image, as a student at Amman Valley Grammar School in Wales in 1959.
Posted by DougH at 11:59 PM No comments: 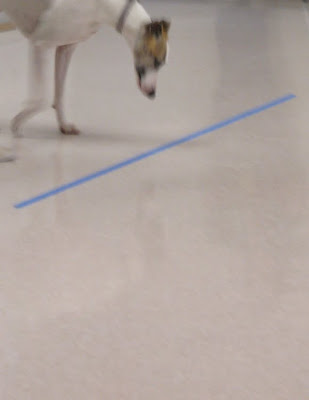 Today, this Sunday August 15th, 2010, Winway Portfolio of Sporting Fields became the third ever whippet to attain the NW1 level in Competitive Nosework, with a 4-P Pronounced Performance score in the judge's comments. 17 of the 48 competitors completed their NW1 title -- the caseload testifying to the exploding popularity of this new dog sport -- while only 1 NW2 title was achieved (and no-one completed the elusive NW3 "Snoutmaster" level) yesterday, the first day of trials at the prestigious Rolling Hills Preparatory School in San Pedro. 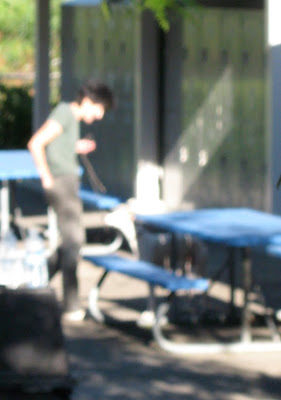 Portfolio got off to a shaky start, taking his time successfully navigating the box drill and vehicle searches, before placing in the top 10 of the the Interior and drawing gasps of astonishment and admiration by completing the Exterior in just under 17 seconds (out of an allotted 4 minutes) - second only to his beloved Briar-Rose (an Aussie handled by Mandolina Moon). 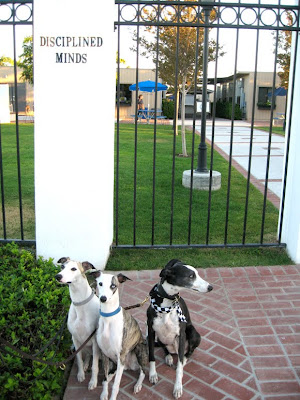 Images by DH: In Advance of the Box Drill; Moment of Triumph; The NW1 Whippet Hat Trick Completed
Posted by DougH at 11:09 PM No comments:

Dig It All, Long John 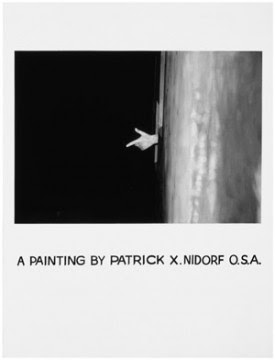 "What makes things meaningful? Is it the mere indication that something meaningful is, in fact, present? Is it the attention we then invest in it? Is it our capacity to subsequently rationalize that experiential phenomenon into a communicable verbal analog: to describe it in words? Is it in the act of communication? Such questions have been inherent to the act of artmaking since prehistory but began breaking surface in the 20th century, nowhere more elegantly than in the work of L.A. painter/photographer John Baldessari, whose retrospective exhibit "Pure Beauty" is up at LACMA through September 12. Having debuted at London's Tate Modern last year, it will movie to NYC's Metropolitan Museum later in the fall. 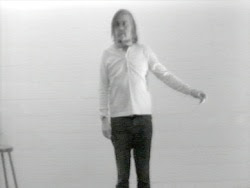 A perfect example of Baldessari's eloquence on these philosophically pointed matters is his series of Commissioned Paintings from 1969, a group of identically formatted canvases, each with a centered, more-or-less photorealistically rendered image of a finger indicating a feature in the environment — often a smudge or stain on a surface — with a caption below by a professional sign painter, reading "A Painting by Patrick X. Nidorf O.S.A." or "A Painting by Anita Storck." Mr. Nidorf and Ms. Storck were — along with a dozen or so other amateur painters — recruited from SoCal art fairs by Baldessari to faithfully reproduce photographic slides of one of his friends walking around and pointing at things that caught his attention. 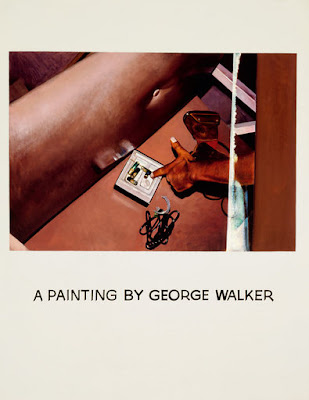 These works overtly flip the bird to East Coast geometric painter Al Held's alleged contention that "Conceptual art is just pointing at things," but more subtly at the hard-line conceptualist position that an actual artifact — especially something as conventional as a representational painting — was an unworthy vessel for such rarified discourse. When people lob the phrase "conceptual painting" at me, my first response is puzzlement. What kind of painting is not conceptual? Elephant painting? I beg to differ. 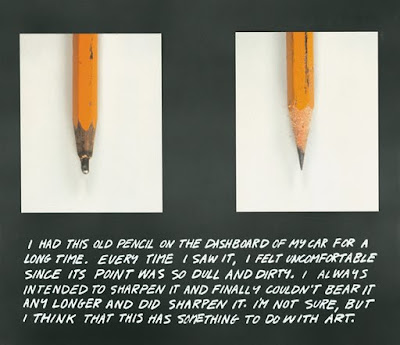 Much of Baldessari's extensive oeuvre, in spite of the fact that he cremated the bulk of his early paintings in a 1970 action (complete with commemorative plaque and book-shaped urn), examines not only such epistemological conundra but the specific manner in which they may or may not be embodied in visual language. And the pointing finger was one of his primary and most effective pictorial widgets. In the early '70s Choosing series, in which "players" take turns indexically indicating their selection of one of three possible parallel linelike vegetables — carrots, beans, rhubarb, etc. — Baldessari simultaneously skewers game theory–based conceptualism and aesthetic taste; the core tenet of conceptualism's nemesis, all that corny formalism so beloved by the bourgeoisie. That's a hell of a fusion kebab. 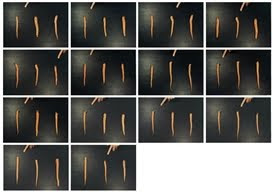 At the same time, the Choosing offers stripped-to-the-bone testimony of the necessity of decision making, even in the form of apparently random, indifferent or uncontrollable choices, as the central engine of creative activity. In Line of Force (1973) Baldessari reduces the signified and signifier to a single, repeated indicative gesture (snapshots of a finger pointing offscreen) seething with exasperation at our species' seeming inability to just look but recalling the Zen admonition to recognize conceptual formulations as 'fingers pointing at the moon.'"

Read the rest of Baldessari: Point Man here.
Posted by DougH at 10:59 PM No comments: 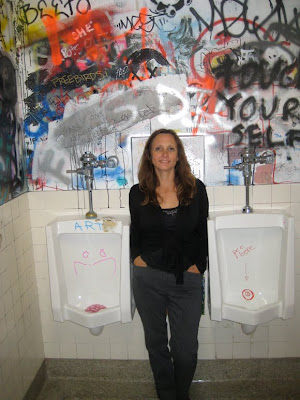 Interrupted the narrative arc of the tag-team intro painting "Upward Bound" extravaganza for a 6-day artist/filmmaker/critic/whatever residency at CalArts for the State's prestigious high school arts program in conjunction with Marnie Weber's more extensive tenure, which included filming of a new as-yet-untitled Super 8 Sunset Boulevard meets Bride of the Beast cinematic masterpiece. I had to skip the actual shoot for the Western Sighthound Combined Specialty in Lompoc -- where Portfolio kicked ass yet took no points -- but I did get to be a Spirit Girl (Crone Iteration) for their second-to-last public performance. Further Documentation forthcoming. 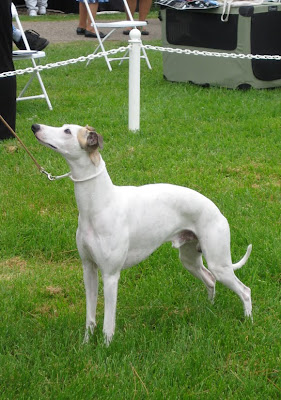 Last Ditch Attempt to Save the Empire 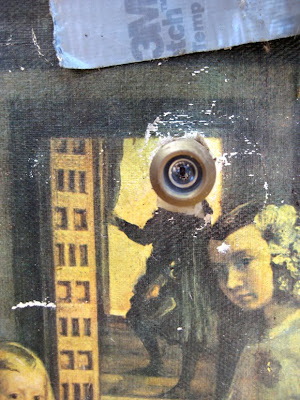 For this exhibition of metaphysically functional art, I am resuscitating my 1994 six-painting suite Last Ditch Attempt to Save the Empire which has become part of my "Rotted" oeuvre through a collaborative transformational entropic process with the forces of nature. Devised as a mechanism for radical semiotic deprogramming, LDAtStE uses leftover Disney cel animation paint with the official designation "Smog" as its primary color vehicle to ensure its geographical specificity and therefore local psychic potency. Victims of the entertainment industry are encouraged to bask in its regenerative energies, but should be cautioned that, as of press time, the vibrating pocket pussy component of LDAtStE III is not operational. Also Chris Miles should stay away, since the last time this work was shown was in Meg Linton's "Bad Sonnets: Grand Metaphors" show at Brewery Projects, after which Chris stopped making art for a decade. Coincidence perhaps, but better safe than sorry!

Check out my website for an image gallery of these [destroyed as of 2012] paintings.

Supernatural is a group exhibition that focuses on objects produced to understand the larger world and control one's position within it, as well as one's fundamental scale within the universe. The work in the exhibition will critically investigate the natural power contained within art; embedded in corporeal painting, totemic sculpture, the phenomenon of photography and transience of video or body of performances that will also evoke ritualistic incantations and other events of the mind and the soul.