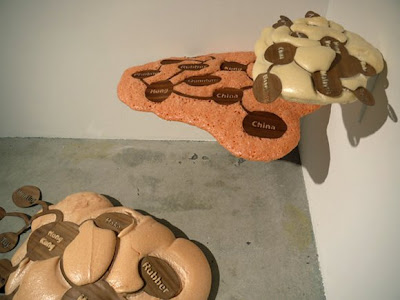 Yes! Congratulations to Shirley Tse, 2009 Guggenheim Fellow. Shirley's latest cluster of poly-everything sculptures can be seen at Barnsdall (4800 Hollywood Blvd 90027) in the 2009 COLA Prizes show, through July 12, 2009 -- for which I wrote the attached essay.

“Just one word: Plastics.” This pithy line, the straw that breaks Benjamin Braddock’s antidisestablishmentarian back in the enormously popular 1967 film The Graduate, encapsulates a remarkably pervasive archetypal association between synthetic polymers and a wide range of (mostly negative) social, political, and even spiritual conditions. Dating back at least to the beatnik era - and continuing as a current running through subsequent cultural moments right up to the present – plastic has been a word, an idea, and a material inextricably commingled with notions of inauthenticity, alienation, superficiality, disposability, waste – indeed, virtually all the perceived negative changes wrought upon our species’ 10,000 years of relative agrarian stability by the Industrial Revolution. Polyester doesn’t breathe!

One of the first things that struck me as remarkable about Shirley Tse’s sculptures – after their initial and persistent formal impact - was their function as indicators of a deeper and more complex understanding of this human/plastic relationship – encompassing and acknowledging plastic’s pop-humanist demonization as an important but reductivist aspect of a much larger, finely nuanced, multi-layered and multivalent narrative.

One aspect of this underlying narrative has been an engagement with the history of plastic in art, most conspicuous in Tse’s avoidance of the kinds of plausibly deniable irony that characterize Pop usages of this most modern of materials – as well as the mute fetishism of its Minimalist incarnations. But Tse has cast a much wider net. Before even leaving grad school she had identified the circulating global stream of cheap plastic consumer goods – in which both Los Angeles and the artist’s hometown of Hong Kong act as major hubs – as a central underlying motif in her work’s formal and conceptual gestation.

The geopolitical and systems theory implications arising from this specific template are extensive, yet only hint at the mycelium of interlaced ideational threads underlying the mandala of synthetic ‘shrooms that comprise Tse’s oeuvre. Through intentional research and reference as well as unusually lucid intuitive and associative connections, Tse has imbued work that reads at first glance as playful but enigmatic formalism - brightly colored inflatables, intricately incised slabs of foam, mutated beverage coolers - with the distinctive sense of elaborately interwoven symbolic sets lying just outside our comprehension, elaborately modeled entry points for a vast interdimensional metro system (if only public art looked half as good!)”

Or the slightly longer original version in Comments. 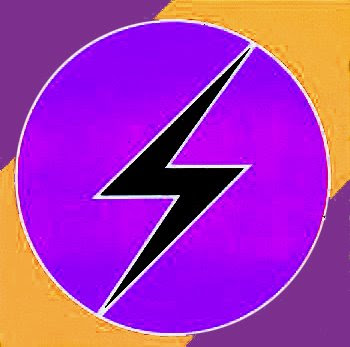 I'm still a little bummed that I didn't get to catch them in the act - no way Coachella, and I was teaching the night they played the live ST to Derek Jarman's Shadow of the Sun at the Ricardo Montalban Theater. But hey, next time, right?
Posted by DougH at 9:41 PM No comments:

Satan is the Source, of Course of Course 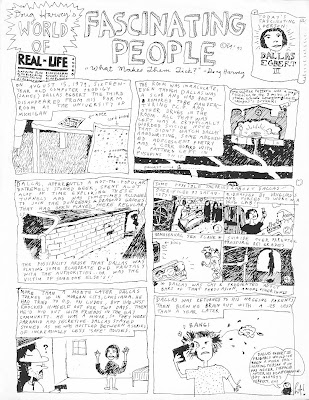 I put this up on Facebook (please explain) for GG2 but it got crunched to unintelligible by some robot. So hopefully if you click on the above image you will be able to read, and learn, and avoid, and live, and move on, my dear friends. Leave comments if you want to learn more from (Doug Harvey's World of) Fascinating People.
Posted by DougH at 7:13 PM 3 comments:

On the Road to Westminster 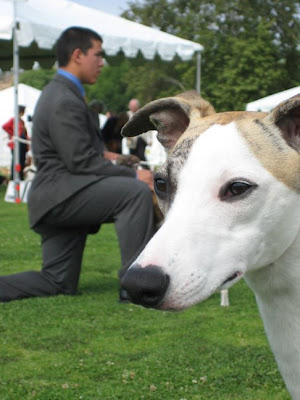 Wow, I've been slackin' with the posts. Teaching, writing, car trouble, plumbing issues, and particularly Portfolio's burgeoning Conformation show career have been eating up the "spare" time. I also started reading novels again. More on that later, but first a couple of shots from the Rio Hondo Kennel Club All Breed Show at Cal Poly Pomona a couple of weekends ago. Above: Portfolio relaxing in the Zone before nailing #2 in a class of 2 (puppies 6 - 9 months). Below: (l-r) Portfolio & Chloe's littermates Phoebe Couture and Diesel, elder siblings Darren and Harmony, who are being handled by the inimitable Valerie Nunes-Atkinson. Throbbing Gristle and more soon! 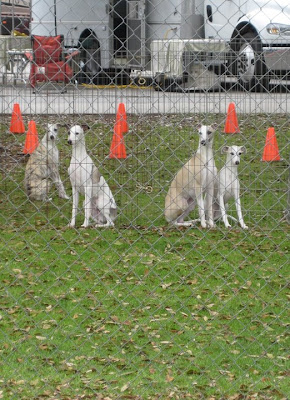