Just a friendly reminder of Sunday's afternoon discussion of Tim Hawkinson's work with Margaret Wertheim and Chris Miles at the Getty:

And if you're on that other coast, Wednesday, May 2nd Mayor Koch hands Tim the keys to the city at

Above: Egg, 2007 Courtesy PaceWildenstein Photo by Josh White, corrected by the MGT
Posted by DougH at 4:06 PM No comments: 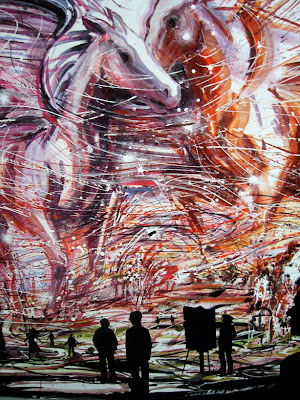 Karen Carson's new body of work conflates such disparate visual domains as fantasy art, Abstract Expression, Western art, and the history of her own work and that of late 20th century painting into a utterly contemporary Pop-Apocalyptic landscape. "As close as fine art can get to van art without blowing the whole deal for everybody."

For her upcoming show, Karen Carson presents new paintings in acrylic on wood-framed tycore panels, accompanied by a selection of framed large-scale studies in acrylic on paper. Spending half the year on a ranch in Montana, where almost every painting is a wild-west cliché, Carson swore that she would never paint horses. Perhaps it was just a matter of time. Now, with all of the dripping sensuality of gestural abstraction, winged horses descend like a firestorm on wooded, rural landscapes, populated by the hauntingly blasé black silhouettes of oblivious urbanites. As much a biting commentary on the myopia of urban cosmopolitanism as a battle of painterly clichés, it is a testament to the depth and intensity of her commitment to painting that Carson can rend the torrential complexities of the world as deftly from the fury of expressionism as from the blankness of silhouette.

In the third gallery will be works from her previous series of landscapes inspired by the wind, including a large scale, two-panel painting in silk dye and acrylic on silk, titled Currents, as well as several studies in watercolor on paper.
Posted by DougH at 1:50 PM No comments: 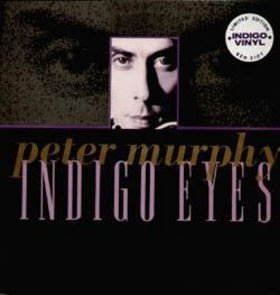 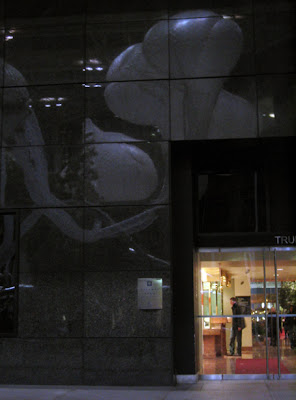 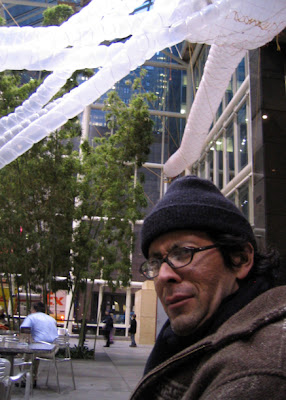 
L.A. Weekly critic Doug Harvey, Margaret Wertheim, acclaimed author and director of the Institute for Figuring, and Christopher Miles, theorist and professor at Cal State Long Beach, explore the art and science of Tim Hawkinson's work on view in the exhibition Zoopsia: New Works by Tim Hawkinson.
Posted by DougH at 4:33 PM 2 comments:

The End of the End has been Postponed! Mark your Calendars! 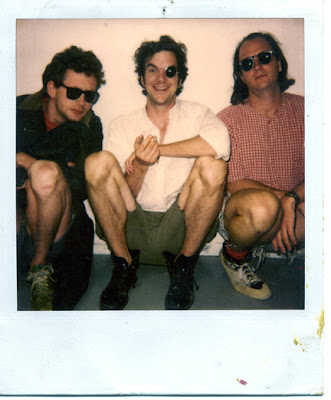 I forgot to take my camera to the openings last night so no shots of Jack Black ogling the Johanna Went collection at Track 16. Wouldn't want to mess with The D anyhow. You know, I had a band in the late 80s called Tenacious Mucoid Exudate - I just wonder if perhaps Mssrs Black and Guss didn't stumble across one of our legendary performances at the King Eddy or our highly coveted limited edition cassette recordings. Listen to this and tell me I'm crazy. Then go out to see A Warning Shouldn't Be Pleasant which has been extended until May 11th! (And keep an eye peeled for The D's new punkadelic "Explosion in a Thrift Store" couture.)
Posted by DougH at 2:50 PM No comments: 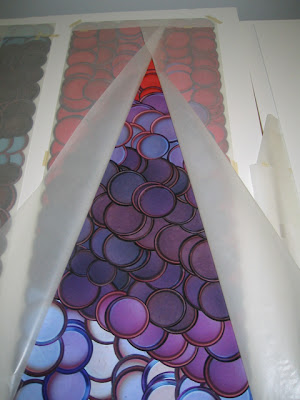 Speaking of Saturday Ginny Bishton's opening at Richard Telles is also occurring on that night. Above is a revealing glimpse of her new soup-based works, and here is my LA Weekly piece about them.
Posted by DougH at 12:06 AM No comments: 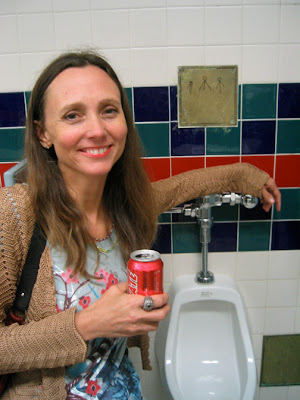 If my calculations are correct, today - Friday the 20th - is the last day for seeing A Warning Shouldn't Be Pleasant, High Energy Constructs' EOTW show at West LA College Gallery in Culver City, where dangle my crime scene marshmallow clouds of Damocles. I was at the opening but forgot to take any pictures of the work, though I did get this awesome shot of Marnie Weber drinkin in the boys room! Marnie's first solo show with her new dealer Patrick Painter opens Saturday.
Posted by DougH at 8:54 PM No comments: 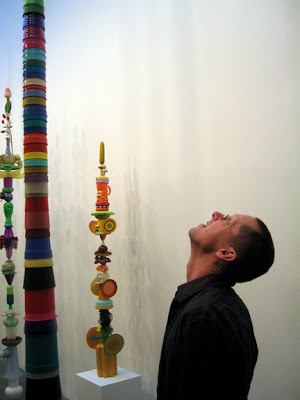 Tim Hawkinson pursuing his investigations Saturday at the opening of "Don Suggs: One Man Group Show." He is inspecting the Feast Pole entitled "Cone" Below is a detail of "Feast Pole of an Ideal" Both works were completed last week. Here is David Pagel's insightful LA Times review from this morning. 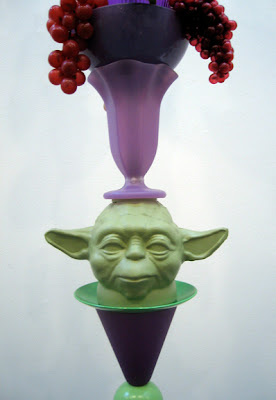 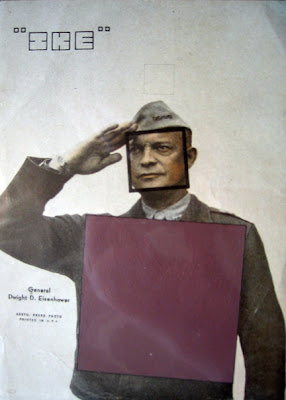 The first of several curatorial chickens is coming home to roost tomorrow. Even if you think you're familiar with the work of Don Suggs, I can guarantee you'll encounter at least one body of work (if not half a dozen) that you haven't seen. Above and below are examples from one of my favorite discoveries during the curatorial process -- a remarkable series of altered found images from the early 70s. Apologies for the photo quality -- my bad. From my catalog essay:

"The early painting Lady (1975) prefigures how Suggs -- on his own terms -- would later allow geometry to resurface as a tool of semiotic interference. But the most exhaustive roadmap of these future concerns was laid out in his Decodes, a little-seen but remarkable group of small, playful collagey interventions. Also known as “Paint Ons”, the Decodes overlay an extensive array of found and appropriated imagery – often from magazines or other commercial reproductions such as postcards – with various painted configurations of the nine geometric forms*. The Decodes prefigure much of Suggs’ later work involving obscured vistas -- as well as the signature found-image obliterations by John Baldessari which they predate by a decade. These small works set the template for Suggs’ multivalent use of ideal geometric forms superimposed on (or otherwise conflated with) stock pictorial representations: they interrupt the trompe l’oeil conspiracy between the viewer and the ground image while delivering a formal structural translation of the picture’s mechanism – simultaneously destabilizing and reinforcing the image; diluting its authority while corroborating its essential authenticity as a picture.

While this is a potent formula, easily (and elsewhere) mined for an entire career, Suggs adds extra layers of playful consonance by incorporating aspects of the source material’s narrative content – often simply through his choice of imagery, as in “Ike,” a rectilinear reduction of General Eisenhower delivering a perfect 45˚’ salute – I mean like, how square can you get? Other examples undermine the order of symbolic codes by looping them back on themselves, as in "Premier Alambic w/ Monk Chartreuse", which superimposes (among other geometric figures) a vessel-shaped silhouette in the titular hue – obviously a jug of the very yellow-green liqueur presumably being distilled in the underlying image. This sort of punning subversion of the platonic idealism of the geometric overlays throws a monkeywrench into the implied dualism of the pictorial/abstract pairings and keeps the viewer on his or her toes. The visual clarity, sweetness, and wit of these works rival the best “Grafis Annual 76” had to offer (which is saying a lot) and suggest that Suggs, in the best Modern tradition, has one foot (and a phantom potential career) in graphic design." 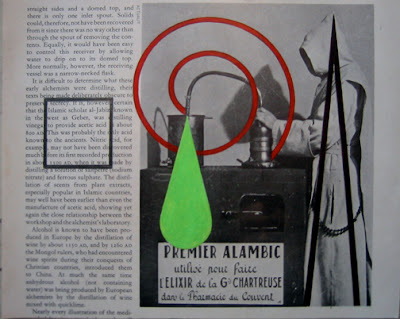 * "the 9 underlying geometric forms of nature (the circle, cross, triangle, square, teardrop, spiral, mandorla, wave, and spire)"
Posted by DougH at 10:56 AM 3 comments: 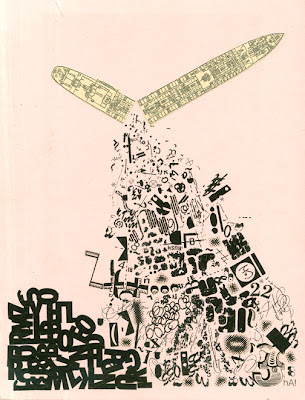 The exhibition aims to create a visual representation of the Anthology of American Folk Music edited by Harry Smith. Artists have been selected who reflect the ethos of the Anthology and whose practice may explore processes of patterning, systems, music, alchemy, anthropology, social change or a ‘folk’ identity. We are interested in creating an archive to continue the collective history and human experience of the Anthology, as seen through the eyes of contemporary visual artists and musicians.


PS: If anyone wants to print out a hi-res copy of the image above, there's one here.
Posted by DougH at 10:53 PM 1 comment: 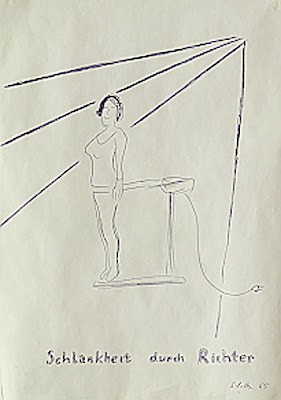 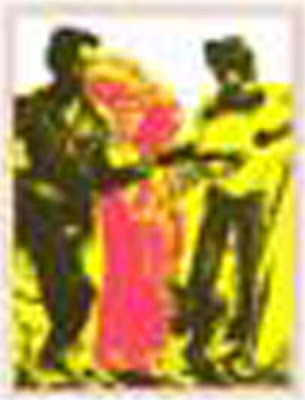 The Dead Walk the Earth 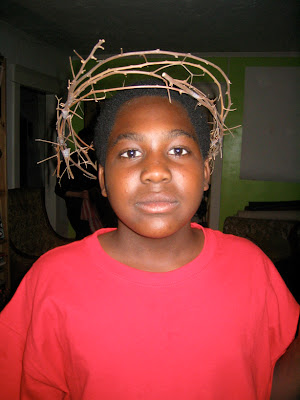 On Friday, while others mourned the loss of their saviour, the hepcats at Il Coral celebrated Halloween with an array of musical acts including Fireworks, who were joined by Victorville's 12-year-old bluegrass sensation Lolo Lodot. Here's an mp3 of their entire performance. 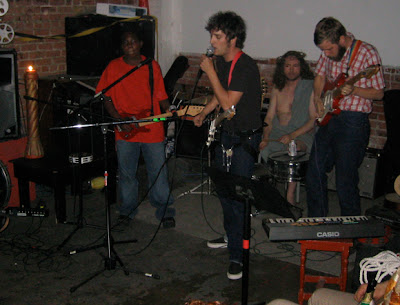 "I just want to point out to all of you the real meaning of this holiday... because it's at midnight on Halloween that the REAL Jesus Christ rises from his grave and walks the earth, killing and drinking the blood of virgins. Are there any virgins in the house? You have two hours."
- My Cousin Clint
Posted by DougH at 11:48 AM No comments: 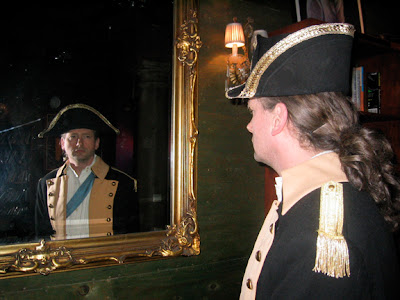 Here are a couple of shots from my most recent film shoot -- Cecil B. Shantibugian's "Mimesis" -- in which I play the role of George Washington. Things were fine until they shut down the jukebox and wouldn't give me back my dollar. Whose face is on it anyway? Motherfuckers. Photos by James Chertkow, M.Ed. 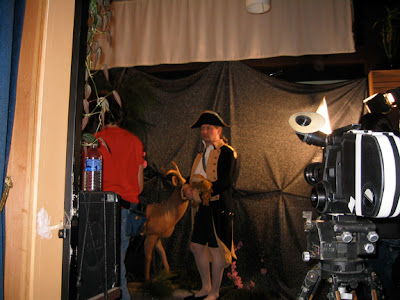 "Government is not reason; it is not eloquent; it is force. Like fire, it is a dangerous servant and a fearful master. It does little to enhance your calm."
G. Washington
Posted by DougH at 8:53 PM 3 comments: