"Ginny Bishton is an artist who defies expectations. Or rather, completely dismantles them, leaving their components arranged in neat rows. One of her UCLA grad-school works consisted of a wall full of hand-copied bread recipes with the instructions left out — inventories of ingredients with the mixing, kneading, fermenting and baking aspects surgically excised — no narrative arc, no money shot. Since then she has steered a willful, idiosyncratic course that has seen her gallery work abruptly morph, often in the space between consecutive solo shows, from gnarly op/minimalist drawings into psychedelic/serialist photo-collages, defying expectations that an artist — particularly a two-dimensional one — needs to stake out a signature visual style and milk it for the rest of his or her life. I'm speaking to you in hell, Roy Lichtenstein... 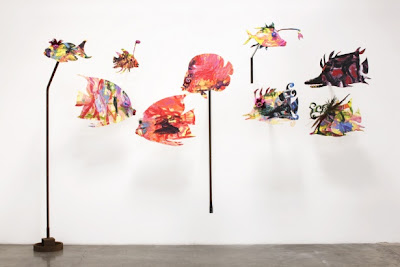 Another L.A. artist whose oeuvre has been characterized by sudden stylistic about-faces is painter Tim Ebner, who rose to renown in the late '80s with minimalist geometric neo–Finish-Fetish assemblages produced in a surfboard factory. In the early '90s, he abandoned this successful marketing niche for a series of awkwardly rendered clown portraits and anthropomorphic animals crashing through the surf. Into the '00s these pictorial scenarios underwent only incremental change, but Ebner's painterly technique grew in leaps and bounds — a fact that became evident when in 2007 he suddenly began producing a flurry of loose, colorful abstract paintings and atmospheric minimalist landscapes. It seemed that Ebner had come full circle, returning to "serious" painting and a nonfigurative visual vocabulary that might easily take another decade to work through... 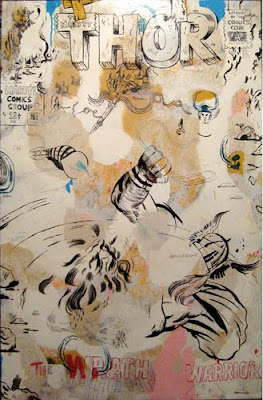 Mark Todd, a former student of Ebner's, offers a less clear-cut version of appropriation and collage in "Juggernaut," the next-to-last show at Billy Shire's Culver City digs before the operation folds back into a renovated La Luz de Jesus space on Hollywood Boulevard. Todd's work has evolved quickly and confidently over the past few years, successfully taking on the scale and materials of contemporary painting that have proven too daunting for many accomplished small-scale collagists — of particular significance in Todd's case because his subject matter/source material, comic book covers, particularly those of Jack Kirby dating from the '60s and early '70s, has an explicit size, loaded with formal and psychological baggage...."


Read the rest of The Bish, the Fish, and the Fantastic Four here.

Visit the shows before Feb 6th at Billy Shire Fine Arts, Rosamund Felsen Gallery, and at Richard Telles Gallery until the 13th.