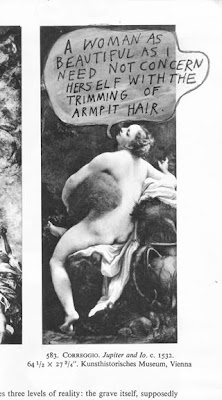 [H.W. Janson Wikipedia entry continued]
In 1935, at the suggestion of Panofsky, who had emigrated to the United States, Alfred Barr sponsored Janson as an immigrant, and he completed a PhD at Harvard University in 1942 (his dissertation was on Michelozzo). He taught at the Worcester Art Museum (1936–38) and the University of Iowa (1938–41) while pursuing his degree. In 1941 he married Dora Jane Heineberg (1916–2002), an art history student at Radcliffe College, and he became a citizen in 1943...

[H.W. Janson's History of Art is one of the most-used art history texts in the Anglo world, and was assigned for the first intro art history survey course I took in the mid-80s. Art History survey courses being what they are, I had to keep my mind alive somehow, and I took it upon myself to make necessary alterations, some of which are featured in the forthcoming group show No Laughing Matter: Art and Humor in Southern California (a Modest Sampling) at LA Valley College. I will try to post the rest of them here as a public service.]
Posted by DougH at 4:41 PM