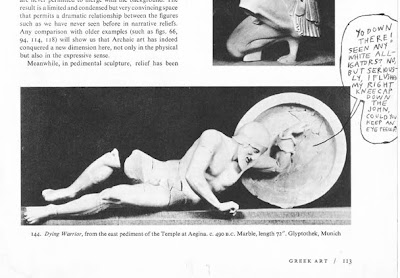 According to Wikipedia, Horst Waldemar Janson (October 4, 1913 – September 30, 1982), who published as H. W. Janson, was an American scholar of art history best known for his History of Art, which was first published in 1962 and has sold more than two million copies in fifteen languages.

Janson was born in St. Petersburg in 1913 to Friedrich Janson (1875–1927) and Helene Porsch (Janson) (1879–1974).[2] After the October Revolution, the family moved to Finland and then Hamburg, where Janson attended the Wilhelms Gymnasium (graduated 1932). He studied at the University of Munich and then at the art history program at the University of Hamburg, where he was a student of Erwin Panofsky...

[H.W. Janson's History of Art is one of the most-used art history texts in the Anglo world, and was assigned for the first intro art history survey course I took in the mid-80s. Art History survey courses being what they are, I had to keep my mind alive somehow, and I took it upon myself to make necessary alterations, some of which are featured in the forthcoming group show No Laughing Matter: Art and Humor in Southern California (a Modest Sampling) at LA Valley College. I will try to post the rest of them here as a public service.]
Posted by DougH at 4:48 PM