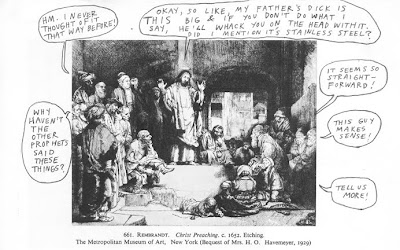 [H.W. Janson Wikipedia entry continued]
He wrote about Renaissance art and nineteenth-century sculpture, and authored two prize-winning books, Apes and Ape Lore in the Middle Ages and the Renaissance (1952) and Sculpture of Donatello (1957). In his later years he was concerned with East–West dialogue in the arts. Over his career, Janson consulted on the Time–Life Library of Art; was president of the College Art Association, editor of the Art Bulletin, and founding member and President of the Renaissance Society of America. He also wrote books on art for young people, some in collaboration with his wife.

[H.W. Janson's History of Art is one of the most-used art history texts in the Anglo world, and was assigned for the first intro art history survey course I took in the mid-80s. Art History survey courses being what they are, I had to keep my mind alive somehow, and I took it upon myself to make necessary alterations, some of which are featured in the forthcoming group show No Laughing Matter: Art and Humor in Southern California (a Modest Sampling) at LA Valley College. I will try to post the rest of them here as a public service.]
Posted by DougH at 9:32 AM