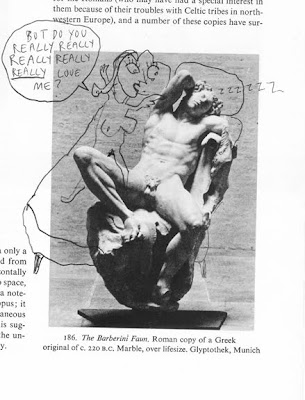 Continued from An exile returns: Traveling exhibition re-introduces Germany to émigré art historian H.W. Janson August 10, 2004 by Liam Otten for the "WUSL Newsroom"
Over the next year, Janson used those monies to acquire some 40 major works of European and American modernism, putting special emphasis on cubism, constructivism and surrealism. He worked primarily with exile dealers, including Paul Rosenberg, Karl Nierendorf and especially Curt Valentin, as well as the former expatriate American Peggy Guggenheim. Ernst's The Eye of Silence (1943-44) was bought from Julien Levy, the artist's longtime dealer, while Tanguy's La Tour Marine (1944) came from Pierre Matisse (son of Henri).

[H.W. Janson's History of Art is one of the most-used art history texts in the Anglo world, and was assigned for the first intro art history survey course I took in the mid-80s. Art History survey courses being what they are, I had to keep my mind alive somehow, and I took it upon myself to make necessary alterations, some of which are featured in the forthcoming group show No Laughing Matter: Art and Humor in Southern California (a Modest Sampling) at LA Valley College. I will try to post the rest of them here as a public service.]
Posted by DougH at 10:34 AM