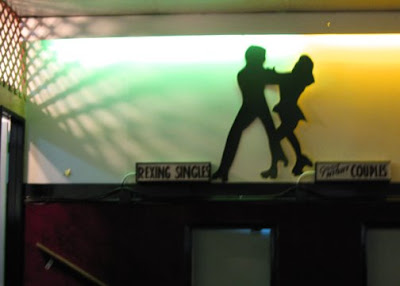 While braver souls were wandering the 110 degree wilderness of Santa Fe Springs or Norwalk or wherever the hell REN, a new performance by Matthew Barney and Jonathan Bepler, was unfolding, I was obliged to honor a previous commitment by attending the air-conditioned nightmare known as the Moonlight Rollerway Jubilee. Did I say nightmare? Wet dream is more like it, with lamé clad master of ceremonies Charles Phoenix doing his William-Conrad-frying-the-Turing-Test showbiz glossolalia to an audience that seemed to be 90% roller community regulars - a community as insular as dog show competitors and comic book geeks. 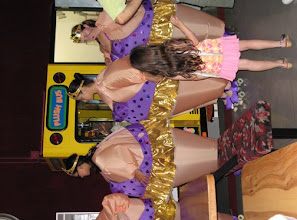 Phoenix's informative and entertaining "slide" presentation was surreally compelling, with a couple hundred audience members seated in a grid of folding chairs on the rink floor hypnotized by vintage images of roller derby queens and weddings on wheels as our host intoned his concentrated camp commentary to a warm but slightly puzzled reception. 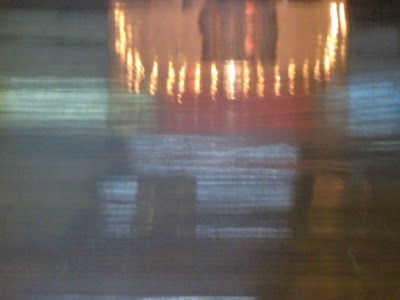 The following hour and a half was a revelation, though. The heck with Matthew Barney. The heck with "Day is Done." Today's cutting edge performance art is being created by the Junior and Senior "In Sync" crews and their Gold Skate Classic champion cohorts. Their knowing vernacular references - a tribute to "Roller Boogie", "Xanadu", and Sir Andrew Lloyd Weber's "Starlight Express" closed the night with a BANG! - were sincere, and informed with a deep kinaesthetic authority. 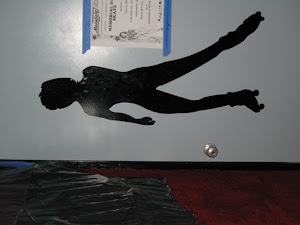 We were actually bumped from the floor by overbooking roller rink jubilee profiteers, but wound up with prime box seats in the concession area - toward which much of the choreography seemed directed, and through which the performers had to come and go between the green room and the arena. All in all a spectacular Pop-mythological triumph. One-word hint though: Solarbabies. Nuff said. 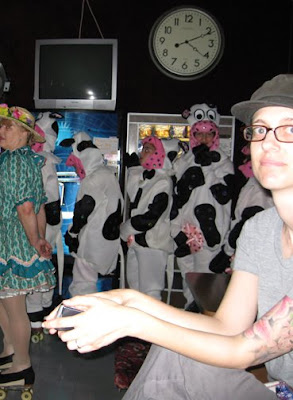