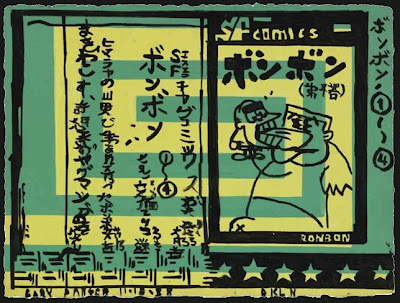 "As time goes by, Panter still makes occasional conscious displays of virtuoso near-abstraction. His recent tablecloth color grid grounds, for example, wipe the floor with most of the current crop of Mary Heilmann-esque wonky geometric abstractionists. The year 1988 was probably the high point (so far) of this conspicuous incorporation of high-art vocabulary in works like Bon Bon [above], Mini Fishing, and Garden, all of which deploy black-line renderings of cartoon figurative imagery and commercial design over bravura abstract grounds that only occasionally correspond with the conventionally “readable” surface content.

I locate the narrative singularity of Panter’s work largely within this relationship between these discrete narrative layers of abstract composition and figurative cartoon scenarios, whose oscillating degree of correspondence is a tertiary narrative system in itself - deriving, moiré-like (or Third Mind-like) from the superimposition of related but disconnected patterns of information. The story is even further complicated by the fact that Panter’s polyglot visual vocabulary also encompasses the semiotic resonance of his pictographic content (and of his high art references, many of which are quotations of established stylistic motifs). 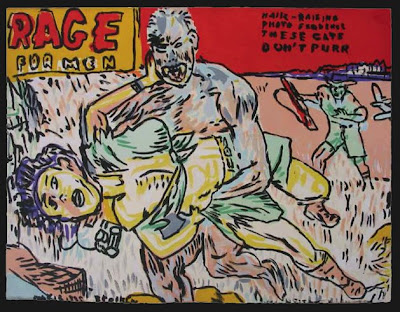 This semiotic resonance includes all the individual symbolic associations emphasized by the relative absence of sequential contexts in the paintings – scenes are either lifted whole from a sequential context (as in Rage For Men 1995 [above]) or cobbled together from a variety of narrative tableaux that don’t quite jibe (Workings 2003) or entirely isolated entities, landscape elements, and props distributed more-or-less randomly across a visual field (Plastic Hopes 2006). Where in a coherent encompassing linear narrative the image of a girl with a machine gun or a dinosaur collapses to its role in the story (and its function to propel the forward motion of that story), the same image stripped of its linearity shifts its significance to an entire spectrum of more immediately comprehensible, metaphorical, and often verbally unmediated associations." 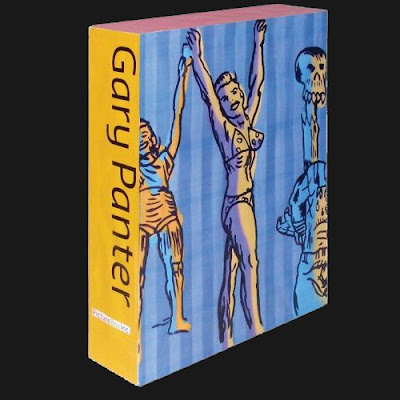 Read the rest of 'Pictures from the Psychedelic Swamp: Gary Panter, Narrative, and the Politics of Idiosyncrasy' in Picturebox's amazing new 2-volume extravaganza entitled, strangely enough, Gary Panter
Posted by DougH at 7:19 PM

The book(s) turned out great. It's such a treat to finally have this big chunk o' Panter available for immediate access.

wow, that's wonderful!!!!! the screamers logo stapled to a telephone pole on sunset got me into punk rock, and then i had the absolutely stellar luck to take a class with him at otis. he was incredible, simply bringing in volumes of sketch books for us to sift through and drool over. he had us do things like draw for 5 minutes and then give the paper to your neighbor. watching someone else desecrate your work was eye opening and full of potential freedoms... he was, and still is, a huge influence. friggin wonderful you wrote for this!