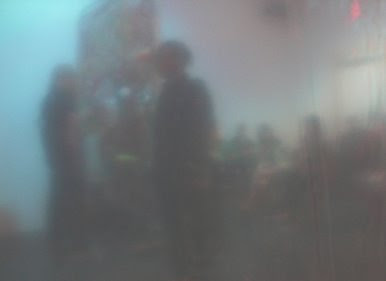 Above: Happeners in the Mist: Steve Roden and his intrepid troupe recreate Kaprow's '18 Happenings in 6 Parts' at LACE in late April. Photo by Sari Roden (I think).

"Forging a unified field theory out of his seemingly disparate Hans Hoffman apprenticeship, American Povera assemblages and participation in the formative social nexus of the Fluxus movement — John Cage’s legendary late-’50s class in music composition at the New School for Social Research — Allen Kaprow operated as the postmodern missing link, personifying the historically bowdlerized continuity between Abstract Expressionist painting and the farthest reaches of the subsequent avant-garde, leaving behind not only recognizable imagery but the very notion of a tangible art object.

Taking to its logical extremes critic Harold Rosenberg’s seminal “painting as an arena of action” concept (where the term Action Painting came from), Kaprow systematically expanded and refined the “arena” to include virtually all intimate human social phenomena, while recognizing the subjective experiences of the actual physical participants — mere memories — as the most meaningful leftovers of the creative process.

Along the path, though, Kaprow left behind a wealth of more-substantial and potential-soaked evidence — including paintings, assemblages, environments, photo/video/audio records of performances, scripts for his trademark Happenings and later relational art, as well as correspondence and a goodly amount of incisive critical writing. Otherwise he would never have been able to have a museum retrospective such as the German-initiated “Allan Kaprow: Art as Life” tribute now on view at MOCA’s Geffen Contemporary."

Read the rest of '"This is really happening: The Branding of Allan Kaprow: Anti-Warhol, Anti-Star' in the Weekly, and go see the show, up thru Jun 30 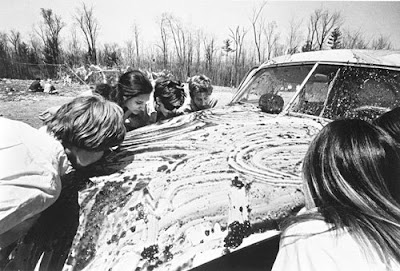 "Oh yeah, beatnick ladies lick that jam off the hood of my car! That's CONCEPTUAL, Baby!" - A. Kaprow (attributed)
Posted by DougH at 12:06 PM