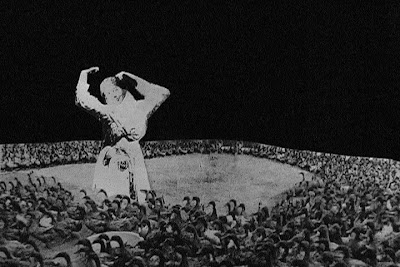 Tonight (Saturday May 31) Lee Lynch of the Coalition for Cinematic Conservation and Preservation - Southern California Chapter will be presenting the feature length opera film "The Mother Load" with the filmmaker Peter Yates. This is a surreally beautiful and funny lo-fi cinema treasure, with a haunting musical score. Yates is best known as half of the avant-garde Elgart-Yates Guitar Duo and has previously composed an opera based on the lives and works of folk artists Simon Rodia and "Grandma" Tressa Prisbrey.

Lee says: The story is based on historical events of a hard-rock mining town in Nevada City and told through the manipulation of various black and white xeroxed historical photo collage puppets, I quote the artist verbatim: "Part of a series of works using new media to empower the individual artist, it follows to the nth degree a do-it-yourself, low-budget aesthetic, with text, music, voices, instrumental performances, recording, sets, puppetry, masks, camera, and editing done almost entirely by the lonely filmmaker. Simple arithmetic dictates that, compared with this $2,000 work, a 100-million-dollar Hollywood film will provide 50,000 times as much life-changing content and aesthetic satisfaction."