The Dark Past of Glenn Bray 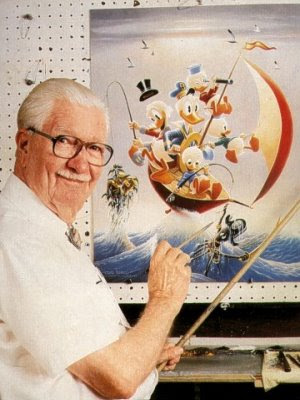 Bray has several peculiar claims to pop-culture fame — his rediscovery and patronage of Basil Wolverton in the early ’70s initiated a revival of interest in the artist’s work and a flurry of high-profile gigs. Bray brought forth into the world the entirely new genre of Wrestling Music by recording and releasing Fred Blassie’s 1976 Pencil Neck Geek single, which became one of the iconic records of Outsider Music after Dr. Demento put it into heavy rotation. Bray also sought out Carl Barks, the then-still-anonymous Uncle Scrooge comics auteur, and convinced him to get Disney’s permission to create an oil painting based on one of his classic cover illustrations. One painting, 'A Tall Ship and a Star To Steer Her By' (1971), begat hundreds — and a welcome income stream in Bark’s later years.

Read the rest in the PEOPLE issue of LA WEEKLY

Above: Barks painting 'A Tall Ship and a Star To Steer Her By'
Posted by DougH at 4:20 PM