Bring it Off! I mean On! 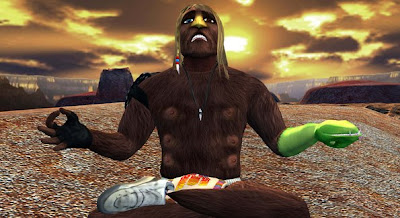 Here, then, is my now previously forthcoming look back at the best non-gallery "art" of the year; a shopping list, as it were, of things I mostly already got for free, although I paid cash money for a few of them, and haven't yet received a copy of the Jung book (hint hint).

"I’ve been looking around at all these Top 10 Art Books of 2009 lists, and geez, it’s no wonder everyone thinks art is so boring and stuffy. The upside is that if some rich, misguided relative actually buys you the $600 six-volume edition of Van Gogh’s complete letters the cognoscenti are drooling over, you can return it and buy everything on my list, with enough left over for a bag of weed and six hours of Thai massage.

Speaking of a bag of weed, those who routinely flipped by their L.A. public-access cable channel between 1996 and the untimely demise of the medium in January of this year at some point probably stumbled incredulously upon The Threee Geniuses, a transcendently self-indulgent orgy of cheap video wipes, stroboscopic edits, trashy glam psychedelia and incoherent studio actions, all mashed up in real time, usually to the equally fragmentary soundscapes created by the Venemous Invisible Amanda, aka Don Bolles. Augmenting the titular genii (Dan Kapelovitz, Jon Shere and Tim “Mr. X” Wilson) were an array of talents ranging from cable-access luminaries like Francine Dancer and David Liebe Hart to noted schizophrenic street people Andy Dick and Ariel Pink. Titled The Re-Death of Psychedelia the 3Gs’ new compilation DVD proves the show was as physically difficult to watch as it always seemed, and perhaps the most challenging and inventive structuralist video art of the new millennium. If it ain’t headache-, nausea- and seizure-inducing, it ain’t avant-garde!"

Dear Andy Kaufman, I Hate Your Guts!
YETI 8
Tales Designed to Thrizzle
Xavier: Renegade Angel
Abstract Comics: The Anthology
You Shall Die By Your Own Evil Creation!
Supermen!: The First Wave of Comic Book Heroes 1936-1941
Ultraviolet: 69 Classic Blacklight Posters from the Aquarian Age and Beyond
The Red Book: Liber Novus by Carl Jung
Posted by DougH at 2:25 PM