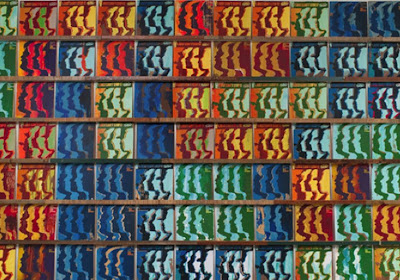 "Since his first solo shows at various L.A. project spaces in the late ’90s, Sean Duffy has produced a series of quirky, interdisciplinary bodies of work that address the ways in which masculinity is constructed in contemporary visual culture, and how these constructions are used to define the boundaries between high art and popular culture, industrial design and craft. Those first shows consisted largely of Duffy’s re-creations of scenes from the original Star Trek — utilizing materials such as collaged fun-fur under clear upholstery vinyl — with Captain Kirk positioned as a superironic absentee role model for the slacker generation.

Since signing on with Susanne Vielmetter in 2001, Duffy’s subsequent reinterpretive icon-tweakings have included an array of high modernist furniture (most notably George Nelson’s Marshmallow Sofa, subjected to repeated affectionate indignities), the Who, and most of the post-painterly abstractionists — not to mention less specifically identified (though often local) contemporary art peers with whose work Duffy continually engages — the design appropriation of Jorge Pardo and Jim Isserman, the record-sleeve art of Dave Muller and Kevin Sullivan, among innumerable other props and citations. Above all else, Duffy’s practice consists of shuffling the decks of his personal and shared cultural referents, inviting all comers to sit in on the game.

This was perhaps made most explicit in The Grove, Duffy’s 2007 installation at Cal State L.A.’s Luckman Gallery, consisting of bins of thrift-store vinyl to be played on 18 separate turntables connected to 360 dangling speakers by a jungle of wires — an anarchist audio-collage playground, which is simultaneously nostalgic and utopian, a rhizomatic usurpation of the traditional hetero-patriarchal infrastructure of DJ culture, and arguably a lowbrow rendition of one of stablemate Steve Roden’s sound art installations.

For “Can’t Stop It” — his latest show and the last for anyone in Vielmetter’s current Washington Boulevard space before the gallery relocates four blocks west — Duffy has continued on the recent downward spiral that has taken him from the heights of immaculate high-design showroom riffs through the post-apocalyptic cargo-cult office space deconstruction of his 2006 show “Temporary Worker” into the dirty boy’s world of the shop, the basement and the garage... 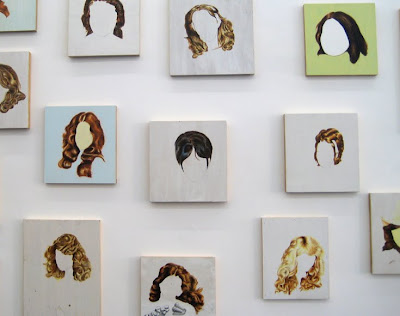 A slightly darker take on pop seriality and gender can be found in Michael Arata’s latest group of paintings, collectively titled “Remember,” on view at Kristi Engle Gallery in Highland Park. Arata, whose work often hinges on outrageous humor or (as with his wall-creeping modular contribution to the “Some Paintings” L.A. Weekly Biennial) playful interactivity, has shifted into a more solemn — though hardly less edgy — mode, appropriating the images of 54 anonymous women whose photos were found in the apartment of L.A.-based serial killer William Bradford in 1984. Bradford had lured several other women to desert campsites with the promise of producing fashion photography portfolios, then raped, strangled and mutilated them. The 54, all photographed by Bradford, were understandably seen as further possible victims. In 2006, the LAPD finally released the photos on the Internet, leading to some identifications — and attracting the attention of Arata."

Read the rest of Signs of Intelligent Life here.