"Or Maybe Two for Flinching." 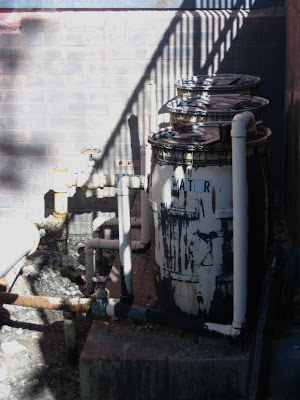 That's the missing final line that came to me in the middle of the night after the deadline for my summation of the last decade of art. So if you read it, just tag that onto the end there, OK?

"Was that really a decade that just sputtered by? Granted, everyone was numbed to the teeth for a couple of years after 9/11, but aren’t decades supposed to be demarcated by some sort of discernible content, like techno music, the civil rights movement or cocaine abuse? What can the Zeros claim? The Jonas Brothers? Avatar? Devendra Banhart? The emergence of graphic novels as a viable literary genre? Good TV? Gay marriage?

These are all more or less wonderful things, but uniformly retro, cobbled together from surefire crowd-pleasers and reconfigured for today’s a-go-go cyber lifestyle. Where’s the surprise, the indication that something new is afoot — something that might signal a sea change in our culture’s disastrous path of self-destructive materialism, or at least save us from drowning in reassuring pabulum? When I see “The ’00s,” I think “the ooze” — and wonder how to scrape it off.

In many ways, the art produced since 9/11 has been a sort of collective cultural shudder, as figure and ground have flipped, and artifacts that were supposed to embody the pinnacle of Western society’s enlightened evolution have been revealed as flimsy props in the most elaborate theater of denial in history.

When German composer Karlheinz Stockhausen notoriously (and career-endingly) described the attack on the World Trade Center as “the greatest work of art there has ever been,” he was putting his finger not only on a truth about transdimensional mythological entities manifesting in “so-called” reality but also on the sore spot — rubbed raw by the fundamental incompatibility of its cohabitants — where Art and Politics tussle. It’s an open, unmentionable wound in our collective self-image, the bullet hole in Chris Burden’s arm, where art history vanished, never to be heard from again.

Burden’s signature 1971 piece, Shoot, where he had a friend puncture his arm with a .22 shot from a rifle 13 feet away (not to mention just more than a year later, when Burden fired a pistol at an airliner taking off from LAX) quite literally embodies the question of how much responsibility an artist must take for the destruction and violence inherent in creativity.

Put another way, when modernism erased the boundary between art and life, it also erased the boundary between art and death, and death has been the elephant in the room ever since. Or to put it yet another way, how the hell do you top that? Kill yourself? Shoot someone else? Better to pretend it never happened and keep rotating the merchandise..."

Read the rest of There Go the Zeros here.

Well I've got it all planned out. I'm gonna paint a bunch of shitty pieces, then fake my death, then collect.

I dunno. The Wire? Xavier?

James Garner and Dick van Dyke tried this death fake cash-in strategy in "The Art of Love" in 1965 - http://www.imdb.com/title/tt0058920/
- and much hilarity ensued. Beware. Hilarity Kills.