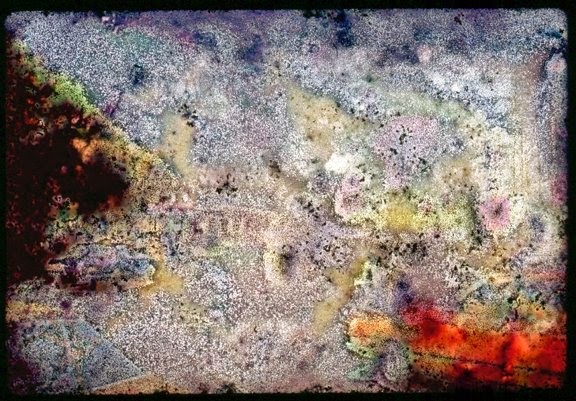 I was just reminded of this very thoughtful and accurate rundown of the Found Moldy Slides as hauntological artifacts akin to the Disintegration Loops of Billy Basinski and the lo-fi pop gems of Ariel Pink. Be sure and click through to his other articles on art and music as examples of "the haunting of a historicised present by spectres that cannot be ‘ontologised’ away."

"One of the most exciting things about hauntology, I think, is that it’s possibly one of the first aesthetic movements in quite a while to see some very specific equivalence in technique between sonic and visual art. I’d been looking long and hard for a visual counterpart to the music of The Caretaker, William Basinski and lately Indignant Senility– I knew one definitely existed, it was just a matter of finding it – when I suddenly found a postcard of an image from one Doug Harvey yesterday.
The Caretaker, Basinski and Indignant Senility (call them the ‘playback hauntologists’) create new pieces of music from ancient tape and vinyl recordings that are treated or weathered down in various ways until they become an ironic, emotionally-laden dark ambient noise. Generally their work is not what you’d call collage – the recordings they use are chopped into long extracts, looped or even left to play in their entirety, but significantly they don’t combine samples (as The Focus Group does) or mix in more contemporary elements (as Boards of Canada and Mordant Music do). In this way the outlines of the original source object are faintly intact, but it’s heavily ‘decayed’ or ‘decaying’.
The rotted celluloid paintings of Peter Doig, which I described in my big ol’ treatise on and survey of hauntology, seemed a bit analogical to this process, but since they were paintings, the original image (even if based on a photograph as it usually was) was always ultimately contrived. To make the equivalence closer, the original source object would have to be an image that was recorded in a similar way as sound is recorded on tape or vinyl. Such a recorded image would of course be generated through photography.
The images in this post are slides found by Doug Harvey in the growing pile of waste kipple outside the Los Angeles home of a serial hoarder, following some kind of intervention or change of heart. Untouched for years, the slides had fallen prey to damp and mould, a process which dramatically transformed the colours and forms within them..."

Read the rest of Adam Harper's Out of the Mould, the New here.
Posted by DougH at 11:53 PM