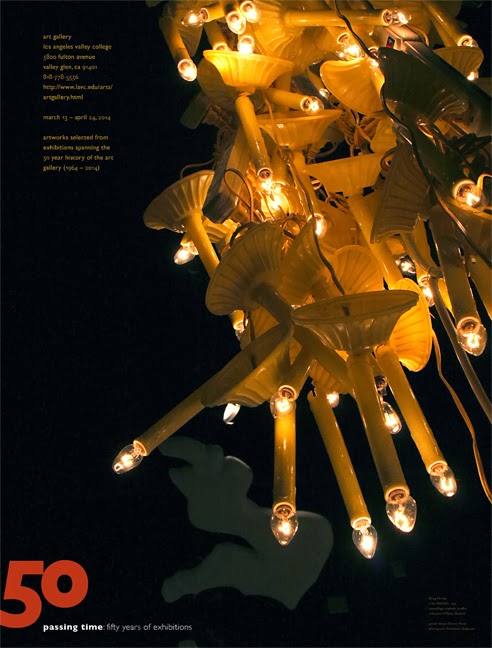 I think I've mentioned this before, but it seems to me increasingly true that LA's junior college galleries are becoming the only viable alternatives to to the market-driven commercial galleries and museums and the tenurific logrolling of the more hifalutin academies. I may have started getting this idea when Dennis Reed and Diana Zlotnick put together a mid-career survey show of my work a couple of years back for LA Valley College, where Dennis was Gallery Director and Dean of Arts.

Now celebrating the 50th anniversary of its opening, LAVC Art Gallery makes a strong argument for my theory, with a string of shows that focus on lesser known geniuses (a Saul Bass show in 1965; the psychedelic photos of Edmund Teske; Richard Pettibone's postmodernism avant la lettre, and so on) as well as idiosyncratic curatorial projects including groundbreaking surveys of Japanese-American photography and underground political graphics from Czechoslovakia.

I'm flattered not only to be included in the anniversary exhibit, but to have my Limp Chandelier (and a ghostly sculpture of Jay Sebring) gracing the poster and the cover of the accompanying catalog. The show opens Thursday March 13th, and I'll be participating in an 8 PM panel discussion at the opening. Visit their webpage for more info and directions: www.lavc.edu/arts/artgallery