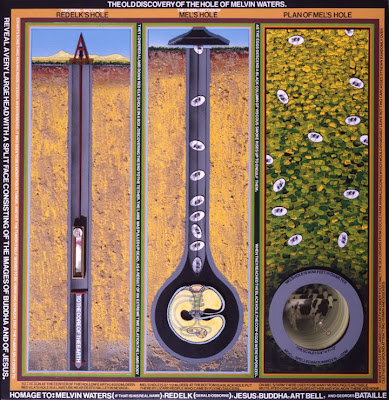 In a late-breaking development it has been revealed unto me that visionary artist Paul Laffoley will be in attendance for the opening of the Aspects of Mel's Hole exhibit this Saturday night. If you are unfamiliar with his work, avail yourself thereof at his extensive website, where you can purchase a poster of his classic alien contact artifact Thanaton III, pictured below. Above: Mel's Hole, 2008, 51.5" x 51.5", oil and acrylic paint, india ink, vinyl letters, sand, surface constructions, magic mirror effect (built into the canvas) on linen.

From the Aspects of Mel's Hole catalog:
Visionary artist and architect Paul Laffoley was born into an Irish Catholic family in Cambridge, Massachusetts in 1940. He spoke his first word, "Constantinople," at six months, then remained silent until the age of four (having been diagnosed as slightly autistic), when he began to draw and paint. In 1968 he moved into an 18 X 30-foot utility room to found a one-man "think tank" and creative unit called the Boston Visionary Cell where he continues to work on multimedia renderings of his visions of alternative futures and complex realities. Laffoley has an alien nanotechnological laboratory implant in the occipital lobe of his brain, near the pineal gland, and a prosthetic lion foot. 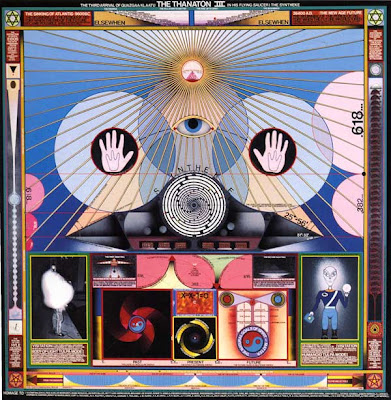