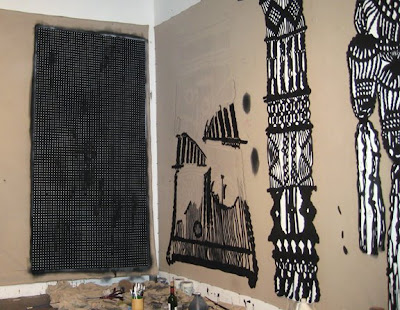 I had this idea that the gap between the openings of Mel's Hole and my solo retrospective would be like the eye of a hurricane, strangely calm. Wrong again! Just went and laid out most of Untidy today with Diana Zlotnick and Dennis Reed, and finished a review of the Kippenberger show at MOCA. Now this:

"As the philosopher Jack Handy once advised, “If you ever discover that what you’re seeing is a play within a play, just slow down, take a deep breath and hold on for the ride of your life.” Amanda Ross-Ho’s combination of conceptual depth and virtuosic formal instincts — albeit using deliberately trashy post-slacker materials, and with the referential reverb turned up to 11 — has fueled a meteoric art-world ascent that has kept her in the state she luckily seems to find most productive: breathlessness.

This may be attributed, at least in part, to the figure skating. Born in Chicago to a Chinese-American painter dad and Italian-American photographer mom (now a conservation ecologist), Ross-Ho was a disciplined “ice ballet” competitor from age 5 to 17 — rising daily at 5 a.m. to explore the boundary between formal mathematical precision and physical self-expression, compulsory figures and free skating.

“I think that’s where the idea of a practice literally developed in my brain, because it was six-days-a-week training, before and after school. And it’s not as goal-oriented as it seems. We skated in shows and in competitions, but really it was about working every day at this thing. And I think that really sunk into my brain.”

Read the rest of Free Skating: Amanda Ross-Ho's Fourth-Dimensional Axel Jump here. Above: the artist's studio. Below: the artist in her studio. 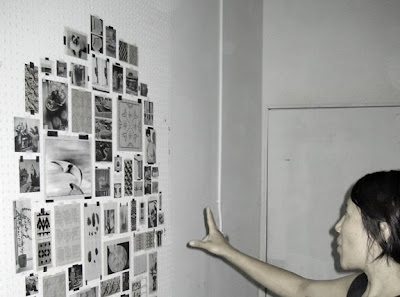