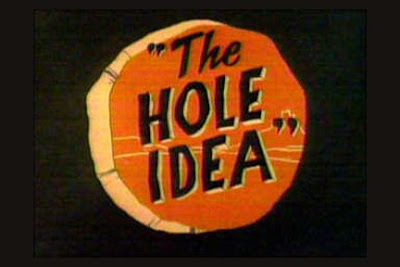 Apparently Swiss physicists are planning the end of the world in conjunction with the Aspects of Mel's Hole exhibit! Participating artist Avigail Moss sent us a link to this NYTimes story about the impending (9/10) startup of the Large Hadron Collider at the European Center for Nuclear Research, or Cern, outside Geneva, with the potential for generating a black hole that will devour the Earth! Kudos to author Dennis Overbye for opening with a quote from one of my favorite post-apocalyptic novels, Walker Percy’s Love in the Ruins.

Above: Title card from Gordon McKimson's 1955 Looney Tunes anomoly The Hole Idea in which well-intentioned inventor Calvin Q. Calculus nearly immanentizes the Eschaton via his invention of the portable hole.

If you have trouble logging on to their site, see comments for NYTimes text.
Posted by DougH at 1:22 PM

Gauging a Collider’s Odds of Creating a Black Hole

By DENNIS OVERBYE
In Walker Percy’s “Love in the Ruins,” the protagonist, a doctor and an inventor, recites what he calls the scientist’s prayer. It goes like this:

“Lord, grant that my work increase knowledge and help other men.

“Failing that, Lord, grant that it will not lead to man’s destruction.

“Failing that, Lord, grant that my article in Brain be published before the destruction takes place.”

Today we require more than prayers that a scientific experiment will not lead to the end of the world. We demand hard-headed calculations. But whom can we trust to do them?

That question has been raised by the impending startup of the Large Hadron Collider. It starts smashing protons together this summer at the European Center for Nuclear Research, or Cern, outside Geneva, in hopes of grabbing a piece of the primordial fire, forces and particles that may have existed a trillionth of a second after the Big Bang.

Critics have contended that the machine could produce a black hole that could eat the Earth or something equally catastrophic.

To most physicists, this fear is more science fiction than science fact. At a recent open house weekend, 73,000 visitors, without pitchforks or torches, toured the collider without incident.

Nevertheless, some experts say too much hype and not enough candor on the part of scientists about the promises and perils of what they do could boomerang into a public relations disaster for science, opening the door for charlatans and demagogues.

In a paper published in 2000 with the title “Might a Laboratory Experiment Destroy Planet Earth?” Francesco Calogero, a nuclear physicist at the University of Rome and co-winner of the 1995 Nobel Peace Prize for his work with the Pugwash conferences on arms control, deplored a tendency among his colleagues to promulgate a “leave it to the experts” attitude.

“Many, indeed most, of them,” he wrote, “seem to me to be more concerned with the public relations impact of what they, or others, say and write, than in making sure that the facts are presented with complete scientific objectivity.”

One problem is that society has never agreed on a standard of what is safe in these surreal realms when the odds of disaster might be tiny but the stakes are cosmically high. In such situations, probability estimates are often no more than “informed betting odds,” said Martin Rees, a Cambridge University cosmologist, the astronomer royal and the author of “Our Final Hour.” Adrian Kent, also of Cambridge, said in a paper in 2003 reviewing scientists’ failure to calculate adequately and characterize accurately risks to the public, that even the most basic question, “ ‘How improbable does a catastrophe have to be to justify proceeding with an experiment?’ seems never to have been seriously examined.”

Dr. Calogero commented, as did Dr. Kent, in 2000 after a very public battle on the safety of another accelerator, the Relativistic Heavy Ion Collider, or Rhic, at the Brookhaven National Laboratory on Long Island. Dr. Calogero said he hoped to apply a gentle pressure on Cern to treat these issues with seriousness. “A crusade against it is a danger,” he said of the new collider. “It would not be based on rational argument.”

Fears about the Brookhaven collider first centered on black holes but soon shifted to the danger posed by weird hypothetical particles, strangelets, that critics said could transform the Earth almost instantly into a dead, dense lump. Ultimately, independent studies by two groups of physicists calculated that the chances of this catastrophe were negligible, based on astronomical evidence and assumptions about the physics of the strangelets. One report put the odds of a strangelet disaster at less than one in 50 million, less than a chance of winning some lottery jackpots. Dr. Kent, in a 2003 paper, used the standard insurance company method to calculate expected losses to explore how stringent this bound on danger was. He multiplied the disaster probability times the cost, in this case the loss of the global population, six billion. A result was that, in actuarial terms, the Rhic collider could kill up to 120 people in a decade of operation.

Alvaro de Rujula of Cern, who was involved in writing a safety report, said extending the insurance formula that way violated common sense. “Applied to all imaginable catastrophes, it would result in World Paralysis,” he wrote.

Besides, the random nature of quantum physics means that there is always a minuscule, but nonzero, chance of anything occurring, including that the new collider could spit out man-eating dragons.

Doomsday from particle physics is part of the culture.

Next year will see the release of the film version of “Angels and Demons,” the prequel to Dan Brown’s “DaVinci Code,” in which the bad guys use a Cern accelerator to gather antimatter for a bomb to blow up the Vatican, and it includes scenes at Cern.

In Douglas Preston’s “Blasphemy,” a best seller last winter, the operators of a giant particle collider in New Mexico find themselves talking to an entity that sounds like God before religious fanatics descend on the lab and destroy it.

Some physicists, who have been waiting 14 years for the new collider, have proclaimed in papers and press releases increasingly ambitious and unlikely hopes, including proving a long-shot version of string theory by producing microscopic black holes.

Inevitably, these black holes have taken center stage in the latest round of doomsday alarms. Most theorists will say the version of their theory that predicts black holes is extremely unlikely — though not impossible. But the chance that such a black hole would not instantly evaporate according to a theory famously propounded by Stephen Hawking in 1974 is even more weirdly unlikely, the theorists say.

Cern’s most recent safety report, in 2003, focused mostly on refuting the strangelet threat in the hadron collider and devoted just three pages to black holes, saying they “do not present a conceivable risk.” It gave no odds. An anonymous Cern committee is working on a final, more comprehensive report.

Neither Dr. Calogero nor Dr. Rees say they are losing sleep over the collider. Some risk is acceptable, even inevitable, in the pursuit of knowledge, they say, and they trust the physicists who have built it.

But it would be more reassuring in the long run, as Dr. Kent noted, if everybody agreed beforehand how much risk is acceptable, before spending billions of dollars and major political capital.

One popular option to determine acceptable risk is to demand that the chance of a man-made disaster be kept below the chance of a natural disaster like being obliterated by an asteroid. Astronomers estimate that chance as one in 50 million in any given year.

Of course, thanks to those pesky quantum laws, disaster could come anytime. Or not. It could happen that the scientist’s prayer will be answered and your discovery will indeed lead to knowledge, human happiness and a new killer ap for iPhones.

“As in all explorations of uncharted domains, there may be a risk,” Dr. Rees wrote, “but there is a hidden cost of saying no.”