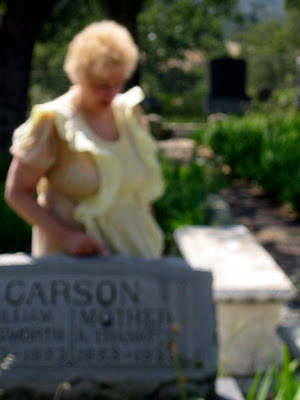 Another of the remarkable personages that assembled to celebrate the legacy of Ishi in Oroville last month was Alberta Tracy, a multi-talented local whose arresting first-person retelling of the Thankful Lewis Carson saga (Thankful and her older brother Jimmie attended school about three miles from their home. On the day of their capture, their younger brother, a child of five, wished to accompany them, the parents permitting him to do so. As they were returning from school the little boy was thirsty and they left the road, going about one hundred yards to Little Dry Creek where they quenched their thirst. The older boy was still drinking at the creek when a rifle shot was heard and he fell forward into the water, shot through the back. Mill Creek Indians appeared from ambush and took the other children prisoners. As they left the scene of their capture, climbing the mountain-side, they looked down and could see their home. The children were barefooted and suffered much from the rough stones and brambles through which they were forced to travel the remainder of the day and far into the night, their captors forcing them onward by prodding them with their guns. They stopped for the remainder of the night in a canyon not far from the home of one of the settlers and left long before daybreak the next morning. Little Johnnie was so footsore and weary that he could not walk and began to cry. This angered the Indians and, after conversing in their own tongue, four of the Indians took the child back into the woods. He seemed to realize they were going to kill him and bade his sister good-bye. His body was afterwards found in a clump of bushes where he had been thrown and stoned to death. They told the little girl they were going to burn her alive when they reached their camp. They continued their journey across the hills and canyons, keeping near the foothills, crossing Butte Creek about five miles from Chico. The little girl saw a faint wagon track and heard a rooster crow and realized that they were not far from some one's house. She begged her captors to let her go but they refused. She displayed much wisdom in the way she sought to gain their favor. The day wore along until it was almost noon, and she was left behind with one Indian to guard her. The Indian was heavily laden with provisions and guns to the others, promising to travel better if allowed to rest for a time. Her entreaties prevailed and after he was out of sight and she thought the way was clear, she got up and ran toward Big Chico Creek. Hurrying along, she heard voices and knew the Indians were looking for her. She hid under the bank of the creek, concealed by bushes, until the Indias left the neighborhood, then crossed the creek and ran for some distance without seeing a habitation, finally reaching the home of Mrs. Thomasson, where she told her story and was cared for, and restored to her parents."History of Butte County, Cal.," by George C. Mansfield, Pages 445-449, Historic Record Co, Los Angeles, CA, 1918) in Clear creek Cemetery - where Thankful and her brothers are actually buried - was a highlight of the weekend. Thankful is just one of dozens of historical women from Butte County and around the world that Alberta has portrayed - other notable roles include Cornelia Lott, Freda Ehmann, Zilla Bills, Sin Chow, The Bride of Leonardo Tomaso, Amelia Earhart, Fanny Brice, Joan of Arc, Maria von Trapp, and - with the help of a pair of handmade prosthetic heads - all three Bronte sisters simultaneously! 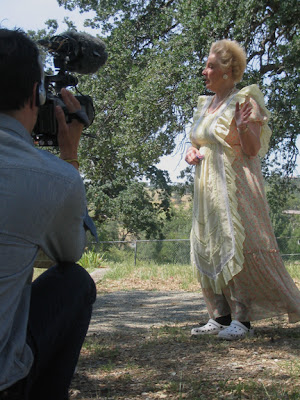