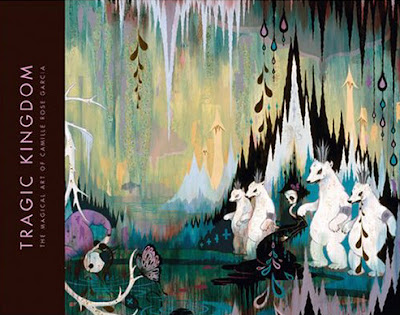 "Camille Rose Garcia’s place in the rapidly deteriorating interzone between The Art World and the Lowbrow world is pretty unique. Beloved in the underground for her nostalgia-dripping, darkly curdled fairytale imagery and exquisite design sense, Garcia has arrived at her place in the upper echelons of the Lowbrow cosmos from an unthinkable mainstream pedigree including a childhood grounded in the LA Chicano Arts movement, degrees from Otis and UC Davis, and a stint at the career-making Skowhegan summer residency program. Her first published review -- in 1995 in Art issues. magazine – describes a consummate academic slackerism: a black duct-tape shell of a car, emitting a soundtrack from the cult film Suburbia. Only the title – Vehicle for My Escape Plan – seems recognizably Garciaesque, with its bleak frisson of impending apocalyptic doom and still-hopeful-in-spite-of-it-all suggestion of personal narrative.

Rather than pursuing what could easily have become a lucrative and respectable life on the Kunsthall and Biennial circuit, Garcia deliberately chose to embrace the craft-conscious, cartoon-friendly, unabashedly decorative vocabulary of Lowbrow. Although bearing considerable relation to aforementioned mainstream artists like Pittman and (most particularly) Deen, Garcia moved into the pictorial realm long after the heyday of “New Image” painting had withered with the art market crash of 1989. This boundary-rupturing shift in allegiance marks a turning point in the history of Lowbrow. In spite of the underground’s defensive dismissal of them as “pretentious”, university-trained artists often feel a real and tremendous pressure to live up to the cumulative legacies of art history -- and particularly the 20th century’s insistence on art’s social relevance."

Read the rest of my essay on Camille Rose Garcia in the catalog for her current survey at The San Jose Museum of Art.
Posted by DougH at 8:57 PM