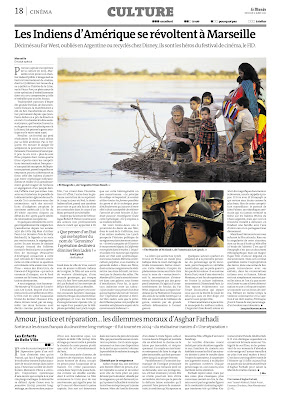 Google translate says:
"At any Honour to whom honor: The Murder of Hi Good by the Ameri-cain Lee Lynch. Inspired by a Real occurred in California in 1870, The film shows the murder brutal the last hunter-In dians, Hiram Good by a blood- mixed. The two men are described as similar in "El Etnografo" by Argentinian Ulises Rosell. DR film, one living in humiliation tion and fear, the other in the glo- laughing his conviction Superiori- ty. Until one day, Ned, the half- Indian alarmed, took a rifle to see what that does to empty its cartridges in the body of a White assumed invulnerable. Inspired by reading the ethno- logue Robert F. Heizer, shot with non-professional actors the ranch that belonged to Hi Good in the town of Vina, co-authored with young Indian activists of the region, the film is a kind of Western chimeric a grotesque cruelty, evoking simultaneously Land Without Bread (1933) One of Luis Buñuel and adventure Billy the Kid (1971) by Luc Moullet. The evolution of the genus is com- crushed me (classic Western, westerncritique, documentethno- graph) and all formats Registration exhausted (from 35 the super-8 via the tele- phoneportable). Lee Lynch explain that this heterogeneity on a little monster: "The principle collage I cared. I wanted use all possible forms gender and technology for finally say that none of they were apt to redeem the atrocity of this story. It fau- drait to reconfigure any this mythology. "It does this in its modest scale. Born here thirty-two years to near the scene of his film, in northern California, from from a modest background, Lee Lynch prospects of political history plastic in its region and Cineas- you: "Between the conquest of the West and the hippie movement, the California is mired in the myth. The iniqui- ty and social racism prevailing in that State are systematically mentsous évalués.Mêmela-against- Culture continues in its own way, the Indian genocide. "But his films, dontcertains cosignésavecla Reali- satrice Lee Anne Schmitt, no hole- Wind not the way the rooms. The Murder of Hi Good has been my- strated in a gallery, in the form installation. For him, the question ing Indian remains taboo: "What do you think of a State which osebaptiser named "Geroni- mo "the operation to elimi- NER bin Laden, without the presi- dent Obama can prove himself in satisfactorily with the Indian community? "
Posted by DougH at 4:06 PM