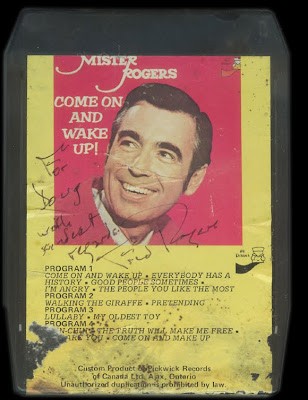 Going through a box of potential Less Art content, I came across this 8-track signed to me by Mr. Rogers while he was getting his star on the Hollywood Walk of Fame. I couldn't get close enough, but my late paparazzi friend Terry Lilly managed to break through.

Here's a piece I wrote about Mr. Rogers for Art issues. back in the late 90s...

When I told my 11 year old nephew Andrew on the phone that I was writing an article about Mr. Rogers Neighborhood, he responded with a fairly devastating parody of Mister’s trademark low-key microscopic view of the mundane “..and look! There’s bubbles of air coming out of the fishes’ mouths! Let’s look closer, boys and girls...Isn’t it wonderful?” Andrew then suddenly shed the affectation of adult cynicism, conceding with a hint of nostalgic enthusiasm that the neighborhood of Make-Believe segments had been at least worth viewing, then finished by sharing the inside scoop that Mr. Rogers ‘is gay’ and ‘owned the Pittsburgh Penguins for a year’,

Such complex responses to Mr. Rogers’ deceptively simple oeuvre are not atypical. I first became aware of Mr. Rogers Neighborhood through a number of memorable parodies, particularly Eddie Murphy’s on Saturday Night Live. Subsequently, I began noticing a strange quality to the occasional soft news items about Mr. Rogers, such as the one in which he advocated the expression of unconditional love in settling labor disputes at his family’s tool and die company in Pittsburgh, cast regular Betty Aberlin’s laughing response to a tabloid’s attempt to dig up some behind the scenes dirt: “In real life Fred Rogers is exactly the person you see on Mr. Rogers’ Neighborhood”. Soon I began watching the show regularly, and, after an initial period of harsh skeptical scrutiny, became addicted to the slyly insinuative anarchistic surrealism of, yes, the Neighborhood of Make Believe segments.

These portions, the central, conspicuously Fredless focus of each program, take place in a simultaneous parallel reality accessed by a shamanic trolley-ride through a tunnel to a neighborhood populated by a polymorphous array of animal puppets and live humans, of human puppets and live humans in animal costumes, of animal puppets in human costume, living in castles, trees, clocks, factories, jungles, and museum-go-rounds; in short, a shifting and centerless array of intermimetic archetypal identities and loci put in the service of whatever that week’s ostensible topic of discussion (When Parents Go Away, Monsters and Dinosaurs, etc.) might be, but always seeming to wind up reiterating that any thought or feeling is permitted expression in the realm of the imagination.

Right from the start, we have to observe that the two-to-five-year-olds at whom the program is directed are attempting to consolidate somewhat less baroque material than might spring to the mind of your fully acculturated adult. Thus, some of Mister Rogers’ injunctions and definitions trigger a battery of exceptions and reservations- I, for instance, have never felt that the policemen are there to help me- that might suggest the presence of an exclusionary, judgmental hierarchy. The Neighborhood of Make Believe is, after all, a monarchy. But this impression is wrong. As King Friday XIII himself has stated, “In this neighborhood everyone can decide for themselves what is best.” and Mr. Rogers’ aim is clearly to arm his viewers with a full and intimate knowledge of the status quo, and the powers with which to -oh so peacefully- overthrow it.

For while he never has the denizens of Make Believe act out any of the most transgressive impulses that wrack the pre-genital psyche, he allows all manner of equally disordinate slippages to occur, from the gleeful and elaborate cruelties of Lady Elaine Fairchild to improbable alliances such as the marriage of an aging human ‘drinking straw salesman’ to a talking starfish in order to provide grandparents (the straw salesman being the biologically related but previously absentee party) to a sad tiger. Such convoluted shapeshifting reaches its textual apex repeatedly in the recurring ‘opera’ events staged by the Make Believists, generally to some cathartic and laudably therapeutic end, but invariably a self justifying phansasmagoria of consensual permission in itself...

Read the rest of Zen and the Art of Make-Believe: A Date with Mister Rogers here.