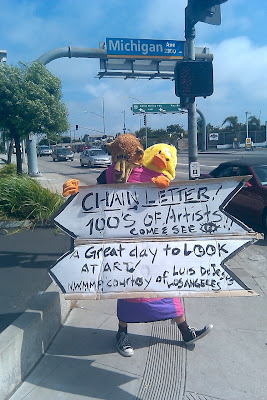 I've just started uploading some of the documentation from last year's Chain Letter shows to my website - I'll post a link when its more fleshed out. But in the meantime, Sofia Leiby just published this thoughtful piece about CL and several other "Horizontally-Structured Megaexhibition" at the WOW HUH blog. "Three recent exhibitions that included more than 400 artists and embraced an “open invitation” model — Chain Letter at Shoshana Wayne gallery in LA in 2011, the fourth annual Brucennial in March of this year, and Hennessy Youngman’s Itsa small, small world at Family Business in April — represent a shift in curatorial posturing for both artists and institutions, a first step towards initiating a destabilizing of both value systems and hierarchy in the art world. Each organizer used utopic, idealistic diction, populist rhetoric, paid lip service to Occupy Wall Street and social media, and most often denied their roles as “curator”, preferring “instigator” or “organizer.” 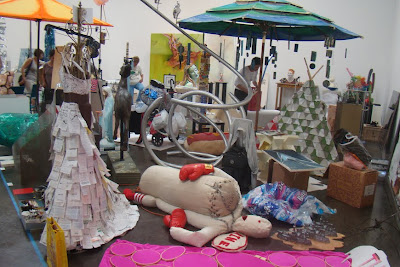 In his article “Club Kids: The Social Life of Artists on Facebook,” for DIS magazine, Brad Troemel remarks on the consumerist value relationships attributed to artists’ work that is exhibited in group shows with intangibly numerous artists: the exhibitions irreparably suture the artists’ identity to his or her name, work, and community, both AFK and on the internet — further objectifying the artist into a brand. “Group exhibitions are the punctuation to an ongoing social media conversation […] promotions materialize into their names being shown side by side one another, categorized by a curator and legitimated by a gallery.”1 Troemel’s verbiage – “materialize” – nods to physical exhibitions, but also to language. “Both are ways of making literal otherwise loose social ties exemplified through text’s silent populism. The image –both of gallery installations and social life– operates in a liminal space between projected conception and firmly believed reality. While artists have always consorted in packs, the process of distinguishing and joining such groupings has never been so formalized as it is today through Facebook.” These massive, “open-invitation” exhibitions can be seen as a literalization of this “liminal space” created via social networks."
Read the rest of Soft Populism & Pop Democracy in the Age of Crowd Sourcing: Investigating Hierarchy in Horizontally-Structured Megaexhibitions here
Posted by DougH at 7:04 PM