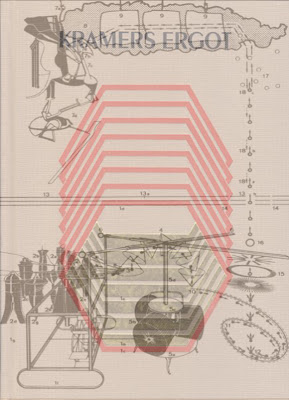 Artillery just published my review of Kramer's Ergot 8, in which I compare the latest version of the flagship comix anthology to Duchamp's Large Glass. But Tulsa didn't understand the Duchamp part and cut it out. Now I don't understand the review, so here's the restored director's cut:

One of the most unlikely essential hipster accoutrements of the boomboom zeros was an ambitious comic anthology helmed by CalArts dropout Sammy Harkham, who went on to found The Family bookstore and Cinefamily repertory film theater – twin lodestones to Westside Angeleno cognoscenti. Back in 2003 Kramer’s Ergot #4 sent shockwaves through the comix community, bearing witness to a festering neo-psychedelic underground previously below the mainstream’s radar – in an upscale format that put even the most prestigious contemporary “graphic novels” to shame. Ratcheting it up yet a further notch in 2008, the lavish full-color 21 X 16 inch hardcover extravaganza of KE7 coincided with the collapse of the economic bubble, and appears to have bankrupted Harkham’s beloved Oakland-based publisher Buenaventura Press. 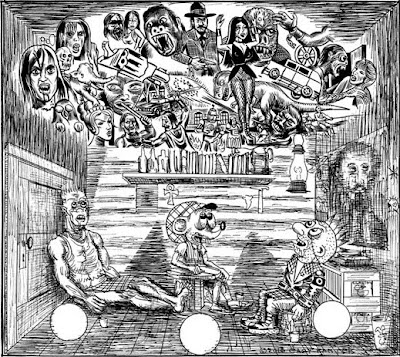 Three years later, Harkham has resuscitated the KE series with a new publisher – PictureBox, whose own retired Ganzfeld series often overlapped with the KE vision and roster. KE8 is at once an exercise in back-to-basics and an aggressive reassertion of the title’s avant-garde status. A relatively modest 9 X 7 inch beige clothbound tome, KE8 looks like it popped in from a parallel 1970s universe, with an embossed gold and orange geometric abstraction on the cover, several sections of sumptuously incorrect retro airbrush abstractions by Robert Beatty (also the cover artist), Takeshi Murata’s ridiculous high-fashion still-lifes featuring VHS b-movies and Coors light beer cans, a bleak Jimbo parable from the always-dazzling Gary Panter, and a generous selection of Oh Wicked Wanda! comics reprinted from the pages of Penthouse: a vintage softcore Russ Meyeresque response to comic icons Harvey Kurtzman and Will Elder’s Little Annie Fanny in Playboy. 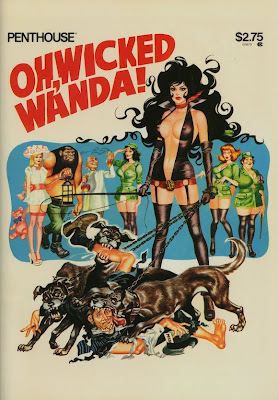 The sequence of Wanda stories (composed of intricately crafted watercolor paintings) included here chronicles a portion of the heroine’s ongoing attempt to create a museum of live celebrities (Bobby Fischer, Martin Bormann, Marlon Brando) kidnapped and frozen in erotic tableaux vivants. Combined with the near-crackpot polemic by punk icon Ian Svenonius (he claims that Pop Art – specifically Camp – “helped vanquish human movements for social justice forever!” – which I guess means we can all go home now) that serves as the book’s forward, this prescient Body Art curatorial fiction seems to be framing some kind of radical critique of avant-gardism and kitsch, and their mutual discontents. 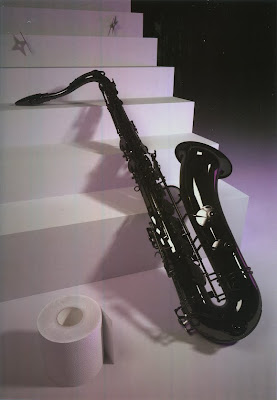 What exactly this critique consists of is never spelt out, which is what allows Harkham’s curatorial intuition to triumph. Most of the narratives included here seem fragmentary, unsatisfying – Wicked Wanda leaves us dangling, her museum unfinished -- and several stories actually hinge on some form of coitus interruptus. Even those that give the people what they want -- like C.F.’s explicit Warm Genetic House – Test Pattern or Kevin Huizenga’s appropriated Silver Age sci-fi conundrum – frustrate on a more structural storytelling level, clipping the money shot or rendering it redundant. Johnny Ryan’s Mining Colony X7170 manages to have its cake and eat it, yet still be less filling, as an EC space opera filtered through Rory Hayes carries the thwarted consummation to cosmic proportions, while delivering a fatalistic Noir narrative arc that would be killed in the first test screening. 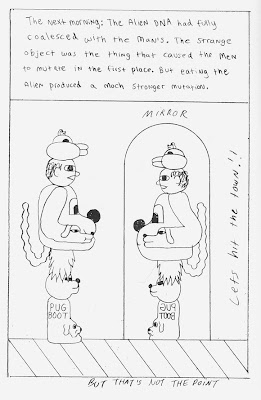 This same not-quite-gelling quality expands to encompass the whole anthology, which paradoxically makes it succeed in spite of itself, and situates itself in the context of one of the central strains of Modernist theory and practice as exemplified by one of its iconic artifacts, Marcel Duchamp’s The Bride Stripped Bare by Her Bachelors, Even AKA The Large Glass, which the artist identified as a “delay” as opposed to a painting, and which was left “definitively unfinished” in 1923. The convoluted symbology of The Large Glass depicts an incomplete mechanism of sexual courtship whose purpose – as with much of Duchamp’s owuvre – is to defer penetration and consummation indefinitely. 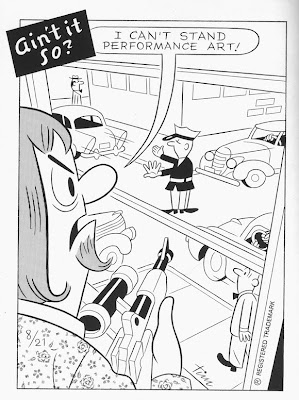 As an allegory for the creative act and for the Modernist agenda, this almost Tantric avoidance of climax delivers unparalleled staying power. By the early 70s – the very period to which KE8’s design and conceptual template aspires – Modernism had shot its wad and disintegrated into the myriad competing niche markets we know today as The Art World. But Duchamp’s legacy was just digging in its talons. By situating KE8 at this historical and aesthetic fulcrum, Harkham conjures a parallel universe in which the evolution of comics didn’t culminate with the profoundly unerotic bang-a-second jackoff of the Marvel Entertainment Group and its subsidiary promotional tie-ins. As such, Kramer’s Ergot 8 is as compelling an argument for curation-as-art-practice as the best group art shows in galleries or museums, but I’m fucked if I know what the fanboys will make of it. Its not like they’ve ever expressed some crying need for prophylactics.

Images: KE8/Large Glass Intertextual Intergration by DH; from KE8: from JIMBO by Gary Panter, from Oh, Wicked Wanda! by Ron Embleton & Frederic Mullalley, from Get Your Ass to Mars by Takeshi Murata, from The Ultimate Character 2002 by Ben Jones, Ain't It So? by Tim Hemsley
Posted by DougH at 2:14 PM