Recent Work of a Revelatory Nature, and Otherwise 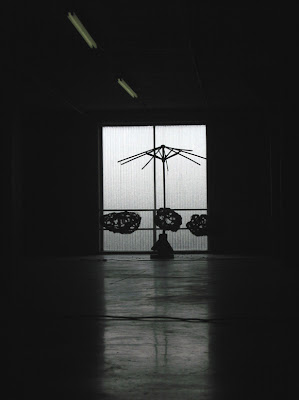 I was intending to do a separate post on the Role Reversal exhibit at Mount St Mary's, but most of the photos I took didn't work out -- some even seem to have vanished entirely from the camera's memory card. Maybe I will anyway, but I also realized I hadn't posted images of the new sculpture I made for the Optimist's Parking Lot show, and then I came across a forgotten very early LA piece in a strange location, so I thought I'd wrap them all up in one blog post and be done with it.

So this is Potato Tree, which I put together for the OPL show curated at Beacon Arts by Keith Walsh and Suzanne Adelman. The pre-rotted umbrella skeleton was going to be my contribution to Chain Letter, for other people to pin or hang their smaller works on, but since 1. I had to park 3 blocks from Bergamot 2. There were already 3 patio umbrella sculptures in the main space by 10 AM, and 3. Lynne Berman had already created a freestanding wooden edifice for others to adhere to, I decided to leave well enough alone. And, as I was to discover during the OPL install, the term "free-standing" wouldn't really have applied in this case. 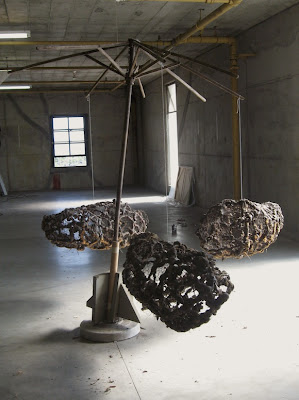 The potatoes themselves will be familiar to anyone who has closely followed my career since the mid-90s - but for the other 6.9999... billion of you, I'll try and back it up (although I appear to not have put any documentation of them on my website yet). The first Pomme de Terre Froid appeared under the bench in a jail cell with a straitjacketed Houdini dummy as part of the Jeffrey Vallance-curated Magic Show at the Magic and Movie Hall of Fame, O'Shea's Casino, Las Vegas. There's an image somewhere, I'm pretty sure. 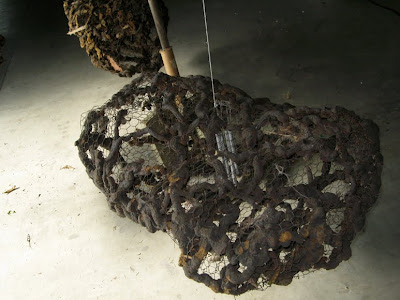 They originally had those eyeball toys - clear plastic balls containing a plastic eyeball suspended in fluid? embedded at every point where the spray foam exoskeleton criss-crossed. Inside the chickenwire structure was another toy called a bumble ball -- which looked like an old-timey sea mine -- containing an off-center battery-operated motor that kept it jumping in random directions. Wedged into the potato, the motion transferred to the larger structure, causing the entire object to shiver, shudder, and creep across the floor (unless it was jammed under a jail cell bench), and the eyeballs to spin wildly.

They multiplied, and appeared in a number of shows -- they had an empty Venice cottage to themselves in Detours, huddled on a stained off-white indoor/outdoor carpet, then one was crammed in the bathroom of Malibu Sex Party at Purple, then a free-range threesome comprised a central component of my installation St. Sebastian Frothy Elvis Carmen Miranda Moby Dick at DADA 96. They popped up several more times over the years, in gradually deteriorated states, but from 2003's Glass Beets and Blind Potatoes exhibit at the downtown YMCA until OPL they had been sitting in our front yard, biding their time. Clearly these tuberous champions are just getting their second wind! 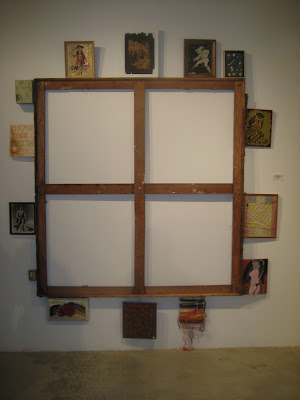 Potato Tree was revelatory in the sense that I had no idea what it would look like (or how it would stand up) until I assembled it. My wall piece for Role Reversal, R.O.G. (Rectilinear Occlusion Gear) 01 (including Chain Letter leftovers and unauthorized contributions from Christine Siemens, Hector Romero, Daniel Hawkins, and others)was engineered so as to collapse to a size that would fit into Carl Berg's car. I assembled it in its collapsed state, and wrapped it up without actually seeing it, so it wasn't until the reception last Sunday that I actually got to see how it turned out. Revelation the second. 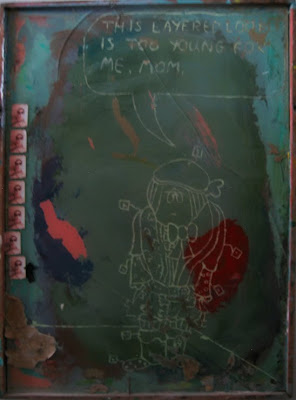 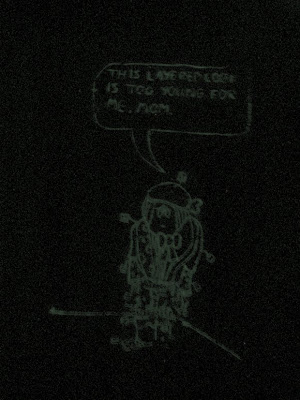 Finally, at Linda Day's wake AKA (One More) David & Linda Party, I was confronted in the bathroom by a piece I had forgotten about entirely -- a little glow-in-the-dark "Cathy' painting I had put in some $100 Xmas fundraiser show or something - was it at POST? Anyway, Linda bought it which was crazy because I would have given it to her. But that's Linda. She also bought 5 copies of the Gordon Haines issue of Less Art, so you know Dave's sitting on a comfy little nest egg right there. 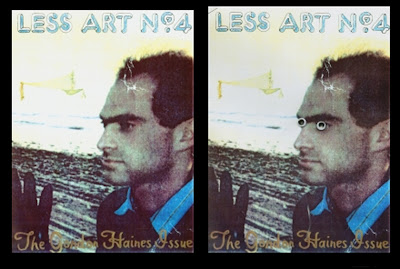