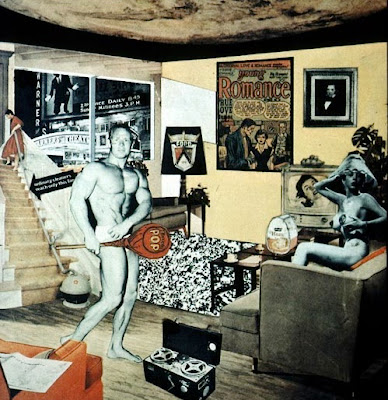 Solway-Jones just sent me a copy of this piece I did for the WEEKLY (but which doesn't seem to be in the online archive) when Richard Hamilton (who just died) showed at their weird first space over by the St. Vincent de Paul almost exactly 10 years ago.

"A short drive up Alameda Avenue from the still-burgeoning Chinatown enclave of young galleries, a new venue for contemporary and 20th-century avant-garde art has appeared in the unlikely neighborhood of Lincoln Heights. After a couple of group shows and a FLUXUS show featuring American expatriate Ben Patterson. Gallery 2211 is currently presenting a modest but compelling survey of British artist Richard Hamilton’s explorations of computer-assisted printmaking technologies dating back to the early ‘70s. Hamilton is best known, somewhat inaccurately, as the father of Pop Art. While it’s true the movement took its name from the Tootsie Pop held by the muscleman in Hamilton’s seminal 1956 collage Just What Is It That Makes Today’s Homes So Different, So Appealing? (above), the artist’s vision has more to do with his reputation as a Duchamp scholar than with the po-faced “critique” of consumerism attributed to Warhol, Lichtenstein et al. Nevertheless, Hamilton was borne to international prominence through his 1962 exhibition of Pop paintings in a group show alongside Peter Blake, R.B. Kitaj and David Hockey, and his subsequent place in popular culture (designing the Minimalist cover and photo-collage poster ⎯ “Edition 5,000,000 Approximately” ⎯ for the Beatles’ White Album) has pigeonholed the artist’s work in spite of its obvious grounding in art history, engagement in classical art technique, and subtle and ambiguous content. 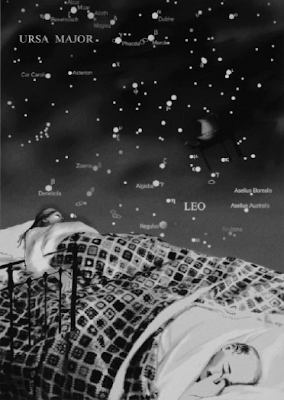 Richard Hamilton, The Heaven Free of Stars (1998)
Hamilton has also been dedicated to the somewhat ghettoized art of printmaking, particularly its ever- evolving relationship to technology, and has been, since the‘70s, perhaps the most high-profile artist exploring the impact of digital media on this ancient technology. The oldest digital piece in the exhibit ⎯ a suite of perspectival diagrams on semitransparent Mylar leading up to a gorgeous high-relief white-silicone cast depicting a sequence of automobile-tire treads ⎯ was suggested to the artist in 1971 by Carl Solway, Cincinnati art dealer and father of Gallery 2211’s Michael. Solway recognized that the complexity of the original schematics, abandoned by Hamilton in the early ‘60s as ridiculously labor-intensive, could be easily calculated and rendered by then-emerging computer-graphics technology. The result is a wry, gorgeous spin on Duchamp’s chocolate-grinder imagery from his masterpiece Large Glass.

Most of the other works in the show are Iris pints of images created using the Quantel Paintbox program over the last decade, exploring the no man’s land between originals and reproductions. Hamilton’s two self-portraits appear at first glance, to be blown-up Polaroid images altered by hand application of paint ⎯ a strategy in keeping with much of Hamilton’s earlier work. The paint instead turns out to be part of the original photo, applied to a sheet of glass held parallel to the camera’s picture plane. In another work, Hamilton completes a print begun in 1949 as part of an unpublished suite of illustrations for James Joyce’s Ulysses, creating a slightly disturbing but surprisingly coherent hybrid of image-making technologies and artistic decisions generated half a century apart. A set of digital images of empty rooms ⎯ previously made into paintings for 1997’s “Dokumenta X” ⎯ is altered to include slightly off-kilter photographs of a model posing, on a later occasion, in the same rooms. It is this sort of unclassifiable, experimental, idiosyncratic conceptual and visual play that has kept Hamilton an important and challenging artist in to his 80th year, and the only drawback to his exhibit is its lack of sprawl."

PS: The Washington Post said that "The Gagosian Gallery said that until a few days ago, Mr. Hamilton had been working on a major retrospective that will travel to Los Angeles, Philadelphia, London and Madrid in 2013-14."
Posted by DougH at 10:08 PM