Who's Really to Blame for 'Avatar'? 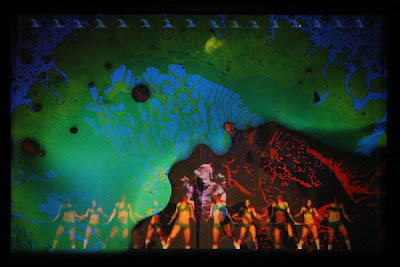 "The very idea of Experimental Cinema in Los Angeles is almost an oxymoron. In the heart of Hollywood, why would anyone with any marketable moviemaking chops bother with such celluloid navel-gazing — and who would ever see it? The truth is that although other cities have more high-profile avant-garde film ghettos, L.A.'s hothouse moviemaking environment and access to technical resources have supported a thriving underground almost from the birth of the industry. As for seeing it? For better or worse, the very structure and visual language of contemporary mainstream moviemaking — special effects–riddled, CGI-saturated, 3-D gee-whiz-addicted eye-candy store that it is — can arguably be traced to the wide-scale absorption of L.A.-based abstract animators by the Industry, particularly George Lucas, in the 1970s. There is a direct line from the visual music of expatriate German abstract geometric painter Oskar Fischinger's 1947 Motion Painting No. 1 to the immersive, uncanny virtual reality of James Cameron's Avatar.

This secret history is one of many to be explored as part of "Alternative Projections: Experimental Film in Los Angeles 1945-1980," a three-day symposium, film festival and exhibition presented by Los Angeles Filmforum this weekend at the USC School of Cinematic Arts. The Industrial Light & Magical gutting of L.A.'s finest psychedelic optical-printing noodlers is specifically addressed in "Not Just a Day Job: Experimental Filmmakers and the Special Effects Industry in the 1970s," a paper presented by media scholar Julie Turnock on Saturday at 4 p.m. as part of the panel titled "Blurred Boundaries: Outsider/Insider Filmmaking and Group Identities." And that's just one of 17 presentations, scheduled over four Saturday and Sunday panel discussions, disparate in topic (ranging from "International Identities and Local Influence: The Development of Visual Communications" to "Taylor Mead, a Faggot in Venice Beach in 1961") but uniformly shedding light on some of the more obscure byways of local film history..."