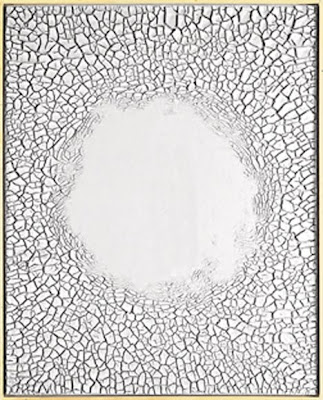 "For most of us, one of the fundamental appeals of art is its exemplary capacity in the struggle against entropy — a cultural artifact is valued according to the degree of order it embodies — and the strength of its resistance to the ravages of time. The more intricately woven the tapestry or solidly constructed the pyramid, the more reassured we are that perhaps Kansas got it wrong with regard to all we are being dust in the wind.

Of course, this being the case, modernist and postmodernist artists have made it their business to challenge this preconception on a number of fronts — by ostentatiously reintegrating the already discarded detritus of culture into new arrangements, as in the collages of Kurt Schwitters and the Combines of Robert Rauschenberg; by emphasizing the spontaneous improvisational gesture in order to destabilize the balance between order and chaos, as in the abstract expressionist drip paintings of Jackson Pollock; by creating deliberately ephemeral performances, happenings and installations whose only record is whatever documentation or relics happen to be left over, as in Chris Burden's often life-endangering actions of the early 1970s, whose collectible evidence consists of snapshots, Super-8 film, audiocassettes and a handful of used bullets. One of the pivotal figures in the development of this broad-spectrum aesthetic of decay was Alberto Burri (1915-1995), an Italian painter who first gained attention with his abstract compositions stitched together from scraps of surplus burlap sacks, then proceeded to explore the surface possibilities of shredded and burned plastic, welded plates of scrap metal, eroded acoustic tile and other quotidian industrial materials. An innovative central protagonist in Tachism and Art Informel — the European equivalents of abstract expressionism — Burri prefigured and influenced later movements such as Arte Povera, pop, certain strains of minimalism, Land Art Conceptualists like the Boyle Family, and the whole Destruction in Art branch of Fluxus led by Gustav Metzger. 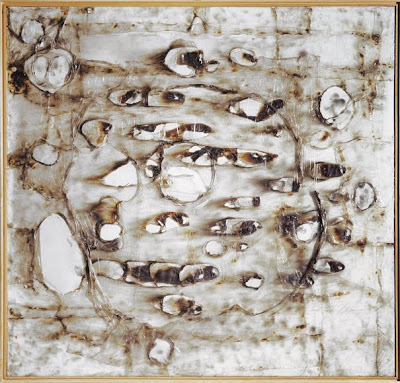 Although he remained largely devoted to the traditional painting convention of rectangular compositional framing, Burri was capable of much more unorthodox modes of expression: During the 1980s he encased the earthquake-shattered ruins of an entire Sicilian village in concrete slabs, creating a walk-through environmental enlargement of one of his later Cretti series, mimicking the craquelure of old frescoes and the parched crust of the desert in an elegiac archaeological theme park–cum–land art installation. 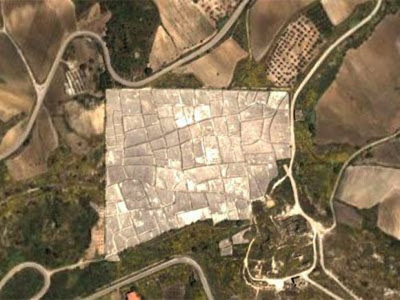 Like many of the European postwar avant-garde, Burri has been given short shrift in Manhattocentric accounts of contemporary art history, but his American legacy is unique in a number of ways. Trained as a surgeon, he actually began painting during World War II in a prisoner-of-war camp in Texas. He had an early and enthusiastic reception by the U.S. art community, with 72 solo and group shows between 1953 and 1963, including three at New York's Museum of Modern Art and four at the Guggenheim. And from 1963 until 1991, Burri spent his winters in near-anonymity at his house in the Hollywood Hills. The artworks created during these annual L.A. sojourns form the basis of "Combustione: Alberto Burri and America," at the Santa Monica Museum of Art through December 18."

Read the rest of "Burri My Art in the Hollywood Hills" here.

Images: Bianco Cretto C1 1973, Acrylic and glue on fiberboard; Martedì Grasso (Fat Tuesday) 1956, Collage, paint, and rags on canvas; Grande Bianco Plastica 1962, Plastic and combustion on aluminum frame; Google satellite image of Cretto mid-80's, built on the ruins of the Sicilian town of Gibellina
Posted by DougH at 12:35 AM