Ya Ho Wa 13 or Thereabouts 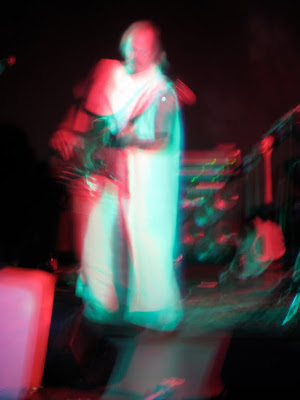 Technically they were Fire Water Air apparently -- at least I think I heard Sunflower Aquarian say as much -- but the power trio that rocked the skeletal simulacrum of Burning Man at the West of Rome fundraiser Monday night was as close to the original lineup of the Source Family's hippie-era house band Ya Ho Wa 13 as you're likely to hear this side of the Immanentatization of the Eschaton (apart from the archival 13 CD boxset of original recordings). What was surprising was how totally awesome they were -- and I hadn't even partaken of the sacrament or put on the 3D glasses (though there were some diffraction grating dealies passed around at one point). And my threshold for self-indulgent hippie jam band shit is seriously low. But for real I was flashing on the Stooges. Maybe some Faust when it slowed down. Tight, telepathic improv, and cocky as hell. I buttonholed Sunflower afterwards and he was all like "We rehearsed yesterday, but before that we haven't played in four months." Somebody has to give these guys a cable access show! Maybe once the Source Family documentary, overseen by Jodi Willie (framed triangularly below) hits the big screen next year. Or maybe some of those Hollywood bigwigs who owe so much to the Family can step up and sponsor an arena tour. I'm talking to you Cort! Share some of those Ted & Venus residuals. 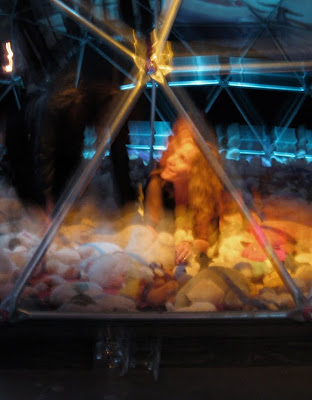