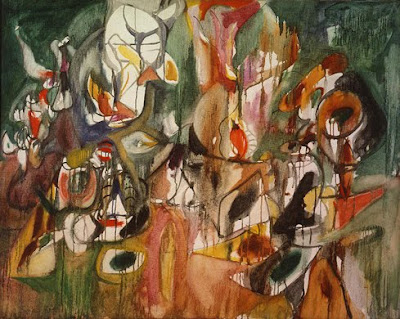 "Arshile Gorky is a pivotal but enigmatic figure in the history of Modern Art — specifically in the alleged shifting of the narrative center of Capital-A Art from Paris to New York somewhere around World War II. Gorky was a quintessential example of American self-reinvention: a figurehead to the ab-ex pioneers in his spongelike eclecticism and existential heroicism, but at the same time a haunted European cast from the Old Master mold — with a psyche rooted in peasantry, Catholicism and genocide, and almost pathologically addicted to biographical fabrication.

When Gorky was working the Manhattan art world of the 1930s and '40s, nobody knew that he was a survivor of the Armenian genocide. Nobody knew he was born Vosdanig Adoian and was not, as he claimed, related to Russian writer Maxim Gorky (whose real name in any case was Aleksey Peshkov). Nobody knew that he had never received the professional training he claimed, and was, in fact, largely self-taught through study of reproductions in library books and visits to public museums. 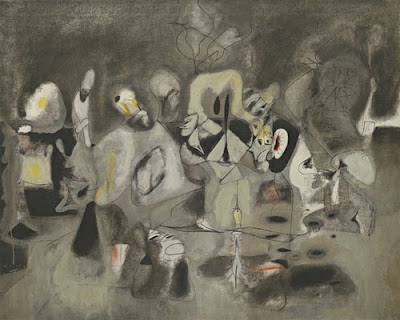 The man they knew as Gorky was, arguably, Vosdanig Adoian's greatest artistic creation — an evolving pastiche of behaviors, narratives and props coalescing into something approximating the persona of The Great Artist — as envisioned by an untutored immigrant's imagination and molded by the inchoate expectations of the emerging East Coast cultural elite. He was a tall, brooding, handsome, mustachioed foreigner; a passionate advocate of modernist painting; a preternaturally gifted draftsman and aesthetic chameleon who created credible translations of Cézanne, Picasso, Léger, Miró and a raft of surrealists over the course of his career.

Ultimately, the power of this fiction overtook his life, and Gorky sealed his canonization by hanging himself at the age of 44, after a series of tragic setbacks, including bowel cancer, a paralyzing car crash, a disastrous studio fire, and his wife leaving him for his good friend (and last and most significant artistic role model) Roberto Matta.

It's the same martyrific formula that launched Jackson Pollock and the New York School into the stratosphere a decade later. Maybe Gorky's whole-cloth-cut persona was his most influential contribution to subsequent generations of artists; by the late '50s the public role-playing aspect of artistic practice had become so ingrained as to be invisible. To become players, artists since Warhol have had to erect hall-of-mirror identities — artistic personae constructed by their artistic personae constructed by ..."

See the show at MOCA through Sept 20