Dani Tull through the day before yesterday - oops! 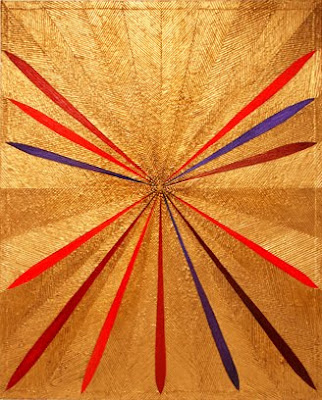 Dani Tull's work over the last decade has frequently referenced psychedelia, as with the peyote cacti and tie-dye sky framing Tull's depiction of our scavenging prehistoric ancestors in (Study for) Unfolding the Stone (the painting that graced the cover of the Weekly for its 2008 "Some Paintings" art issue), or the heavy-lidded stereotypical stoner cartoon on the faux cover of his hypothetical hippie zine, My Fluorescent Beatitude (2005).

His latest body of work will be previewed as part of Mark Moore Gallery's "Ultrasonic V: It's Only Natural" opening on September 11. Titled "Golden Eagle," the new work is a radical departure from his earlier work, and not only for its obvious abandonment of cartoonish representation for elaborately carved, reflective encaustic abstractions — kaleidoscopic mandalas of golden, featherlike striations that shift dramatically depending on the viewer's point of view.

The new works still deal with psychedelics, but rather than filtering the topic through the plausible deniability of pop culture–mediated irony, they derive from the artist's recent commitment to the exploration of mystical states of consciousness through the shamanistic use of plant entheogens, and are intended to act as "technological objects that charge and release transcendent energy." Now that's what I call functional art!