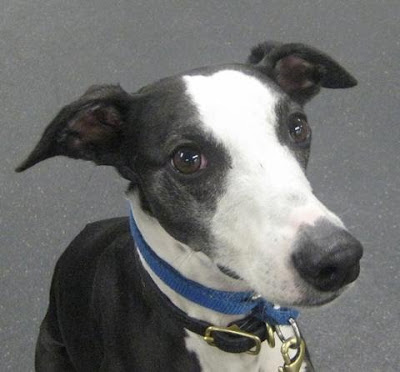 M.A. & Nigel are the subject of one of the first in a projected series of spotlight profiles by J. Gerard Schwerdt on the K9 Nose Work web page.

"When you mention the breed name “Whippet”, what usually comes to mind is a slender, athletic racing dog running around a track at speeds up to forty miles per hour, chasing a fast-moving artificial prey object. That life may have suited Nigel, a five-year old Whippet owned and handled by M.A. Peers. But for now he is content to be unique among dogs of his breed. According to M.A., “I know and compare notes with a number of people who do competitive dog sports with Whippets and Greyhounds. So far, I haven’t managed to convince any other sight hound people that this [sport] is great for our dogs. So Nigel is the only Whippet doing nose work that I know of.” Nigel’s slow, deliberate movement while searching for odor belies the fact that he was bred for speed, and lots of it, at a moment’s notice."


Nigel, who was born in Virginia, came to M.A. and her husband, Doug Harvey, at the tender age of one year, when it was discovered that Nigel was too large for his breed standard to be an AKC show dog. M.A. began K9 Nose Work classes with Nigel in February of 2008. He took to nose work right from the start, and proved to be very thorough and meticulous in his searches. In addition, as he is somewhat wary of other dogs, Nigel was pleased to be in a training situation where there were no other dogs present.

If you have ever had the opportunity to watch this team in action, it is quite fascinating. Close your eyes as they do an interior search and you would not be aware that anything was going on. These two are perhaps the quietest dog-handler team ever. But more important than their “stealth” is the fact that Nigel has had to overcome several obstacles to get to the level he is at today. (Nigel earned his NW-1 Title with a perfect score and a total time of 3:44.82 at the most recent trial held on June 7th of this year). Like most sight hounds, Nigel is very vigilant and easily distracted by any unusual visual stimuli. These traits can make exterior and large-area interior searches difficult. M.A. has a great deal of insight into her dog’s searching skills: “Nigel’s performances during box drills or vehicle searches are very different from exterior or interior searches. I think he proceeds with the former more the way he does agility or obedience, and as soon as the parameters of the search expand, he has other hunting options that provoke his hound drives.”

Yet Nigel, as does any dog involved in nose work, displays search methods that prove to be inherent strengths, but on the surface appear to be insignificant. One of these methods is the fact that his movements are slow, deliberate, and thorough. However, as instructor Amy Herot points out, this proves to be beneficial in that he is less likely to rush past a hide. This fast movement can stir up air currents, often making an already difficult search even more difficult. Other nose work students have learned from this, and many have chosen to slow down their dog’s speed of searching as a result.

Nigel and his dedicated handler practice every day, even if it is only a single easy search. Practice locations include parks, universities and colleges where M.A. and Doug teach, art galleries, friend’s houses, and studios. M.A. and Nigel often practice with Kelly Coyne and her dog Spike, another team that have taken nose work classes. These practice sessions often take place in the most distracting of environments, such as in parking lots, strip malls, and schoolyards along Sunset Boulevard in the Echo Park area. As M.A. points out, “The dogs have to work through a lot of nearby people and traffic, critter residue, and old burritos and corn cobs. It is a very public environment and skulking around with gloves and little packages does attract attention. … Nigel loves the competition and security that Spike provides.”

As for the future of nose work with Nigel, M.A. says they are not, for the time being, focused on getting their NW-2. Instead, she is focusing on increasing his confidence and her own ability to communicate effectively with him as his handler.