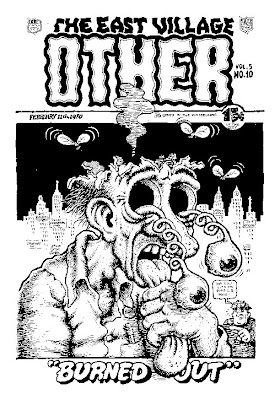 The recent announcement that the Hammer Museum would be displaying the complete original pages of Robert Crumb's new adaptation of The Book of Genesis reminded me that I hadn't posted a link to this piece, which we rushed to press just in time for Comicon. Strangely, it's disappeared from the WEEKLY website, so I'll reprint it here in its entirety.

Since 2005’s benchmark MOCA/Hammer “Masters of American Comics” exhibit, there has been a growing acceptance in the art world of graphic narrative as a legitimate medium – ranging from the industry-wide influx of young experimentalists from the Providence/Kramer’s Ergot axis to the belated recognition of neglected “masters” like Basil Wolverton, whose ultra-grotesque 50’s-era caricatures (among other, even stranger, works – like his hyper-rendered apocalyptic illustrations for Herbert W. Armstrong's Radio Church of God) are currently on view at NY’s prestigious Gladstone Gallery (Matthew Barney, Lari Pittman, Richard Prince) in an exhibit culled from the collection of local hardware magnate Glenn Bray by ex-pat LA artist Cameron Jamie.

Of course, Bray’s unparalleled collection was the basis for an earlier selection of Wolverton’s work exhibited in a slightly more off-Broadway venue – Santa Ana’s Grand Central Art Center to be exact. The GCAC’s 2007 “The Original Art of Basil Wolverton” (for which I wrote a catalog essay) was a typically idiosyncratic offering from this unique venue, whose 10-year exhibition history has blurred boundaries between high and lowbrow, insider and outsider, real and fake – with shows like Thomas Kinkade’s first ever museum survey (curated by Jeffrey Vallance) and “100 Artists See Satan.” 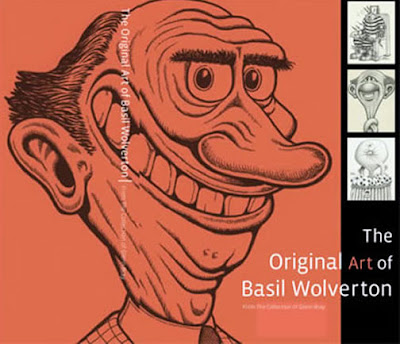 For their latest blur-job, the GCAC is hosting a traveling retrospective of an artist whom critic Robert Hughes has compared to Goya and designated “the Breugel of the 20th century.” Thanks to Terry Zwigoff’s 1995 documentary, Robert Crumb achieved a level of timeless mainstream branding that allowed him to transcend his association with Haight-Ashbury’s Summer of Love and become the default public stereotype for the “wacky underground comic artist” – though it’s hard to hold onto the claim to continued countercultural credibility when one’s deadpan adaptation of “The Book of Genesis” is heralded by a 12-page excerpt in The New Yorker (June 8).

Not that Crumb has anything left to prove – as the creator of the underground comics genre with his self-published Zap Comix (as well as his less celebrated 80’s zine Weirdo -- a crucial continuation of the underground tradition through the Reagan era) and with 17 volumes of collected work (plus 10 facsimile sketchbooks and innumerable anthologies, coffee-table tomes, collected letters, etc.) of his intricately rendered, old-timey-fetishism-meets-psychedelic-pornographic-class-rage narratives published by the amazing Seattle-based Fantagraphics, Crumb’s legacy is pretty much unassailable. 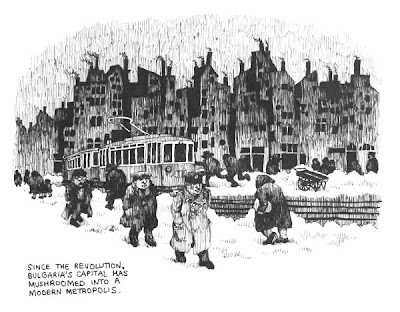 Although one of the most charming pieces in the GCAC’s reduced version of the show is sculptural – a collection of anthropomorphically doodled-upon wooden Spoolmen created in the last couple of years – Crumb’s world is fundamentally 2-dimensional, and the reasons for leaving the comfort of your armchair to visit it are also twofold. Firstly, there’s the lingering Benjamin-stylee aura of the handmade object, given additional layers of convolution through the lens of comic collector fetishism and the tremendous historical impact many of these drawings had when reproduced around the world. 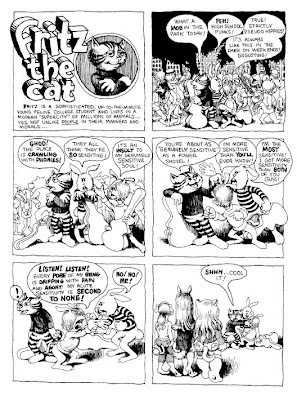 Secondly – and most importantly – is the opportunity to make a close inspection of Crumb’s craft. The phenomenal fluency and graceful labor-intensity of his best work is unsurpassed in contemporary graphic arts, but this only becomes clear when you see the originals, and realize that this is actual ink put on actual paper – and there’s no Wite-out! Drawing almost entirely from a single collection, “R. Crumb's Underground” isn’t the quintessential museum show the artist deserves – maybe the Centre Georges Pompidou in Crumb’s adopted homeland will come through in that department – but it’s a strong representative sampling of his half-century oeuvre.

One anomalous oddity in the show is a video shot in the early 70s at one of the Zap comics collaborative drawing jams where most of the Zap comix crew (including a hot young Robert Williams), joined by Gilbert “Freak Brothers” Shelton are seen producing one of their stoner montages. About halfway through, they’re joined by a slightly older, relatively square-looking man who is greeted reverentially and invited into the mix. This is Harvey Kurtzman, probably the only person who could challenge Crumb’s claim as the father of underground comics. 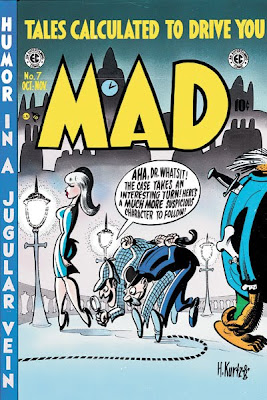 While Zap was undeniably the first in a series of explosions that changed the world’s ideas about the possibilities of graphic narrative, the fuse had been lit a generation earlier, when Kurtzman – mastermind behind EC Comics’ now-legendary war titles Two Fisted Tales and Frontline Combat – pitched a satirical humor comic that became MAD. Under Kurtzman’s guidance between 1952 and 1956, MAD combined his own prodigious talents with those of Wally Wood, Will Elder, and Jack Davis to raise parody to a delirious new medium that generally surpassed the artfulness of its conventional mainstream targets.

MAD lit the fuse that reached critical mass with the underground comics phenomenon of the 60s and 70s (and can be reliably credited as the inspiration for Roger Ebert’s giddy postmodern scripts for Russ Meyer’s Up! and Beyond the Valley of the Dolls, amond other non-comic cultural milestones), but by the time of his death in 1993, Kurtzman was virtually unknown outside the world of comic fandom – and aficionados of Playboy’s “Little Annie Fanny” on which he’d –ahem—lavished his talents for the previous twenty-five years. This obscurity has been gradually subsiding since then, and has reached a new plateau with two recent publications. Though most of his MAD work has been readily available in some form of reprint since its original publication (most recently in two “Mad Archives” anthologies from DC) it was only recently that his subsequent publishing venture Humbug saw the reprint light of day – thanks again to Fantagraphics. 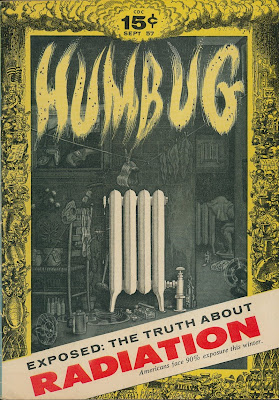 Kurtzman left MAD in a tussle for artistic control, pursuing Trump a glossy, deep-pocket dream gig for Hugh Hefner that tanked after two issues. His next brilliant career move was to start a more expensive, poorly printed B&W variation on the MAD formula, funded and published by a collective of fellow artists. Surprisingly, it actually lasted for 11 issues. Literate and subtle, yet still retaining passages of the claustrophobic associative horror vacuii of Kurtzman & Elder’s gag-clogged MAD panelage, Humbug is one of the great lost treasures of American humor, miraculously reissued in a high quality format unimaginable in its original pulp incarnation.

After the collapse of Humbug, Kurtzman spent a couple of years in freelance limbo, producing some of his most distinctively loopy solo work – a gorgeous beat adaptation of The Grasshopper and the Ant for Esquire, the first all-original graphic novel (Harvey Kurtzman’s Jungle Book – a complete flop), an epic unfinished reimagining of Dickens’ A Christmas Carol, and much more. These, along with samples spanning Kurtzman’s entire oeuvre, are represented in “The Art of Harvey Kurtzman: The Mad Genius of Comics” from Abrams. 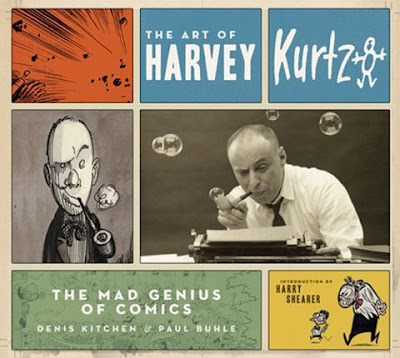 This lavishly illustrated doorstop of a book -- compiled by underground artist/publisher Denis Kitchen and pop history prof Paul Buhle – covers several other lesser known periods of Kurtzman’s career, including his pre-EC comic work, and his final venture into magazines – the as-yet-unreprinted early 60s HELP!, cofounded by James “Famous Monsters of Filmland” Warren, and featuring the editorial talents of Gloria Steinem and Terry Gilliam, as well as featuring the first published work by several future underground comix stars – including R. Crumb, whom Kurtzman famously sent on a fact-finding mission to Bulgaria. 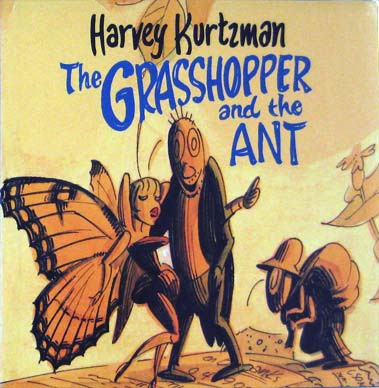 Sadly, the book’s subtitle is a bit of a misnomer, as Kurtzman’s career was largely defined by compromise in the interests of fiscal security, as epitomized by his lengthy tenure under Hef’s thumb churning out the slick, overdetermined “Fanny.” Kurtzman knew that his best work resulted from complete autonomy, but it was rarely an option. Maybe if he’d been born 10 years later and made the Zap scene as a player, things would have been different. Different, yeah – like there would have been no Zap scene, and there would have been no R. Crumb, and there would never have been a MAD Magazine – or a Beyond the Valley of the Dolls. That’s a world you don’t want to visit.