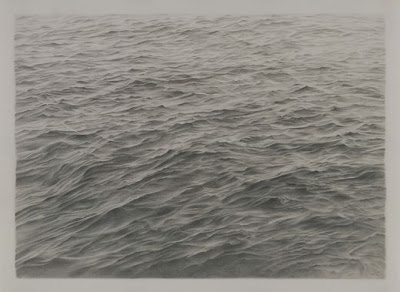 I'm finally back in the WEEKLY with a review of the Hammer's retrospective of Vija Celmins'drawings. If you're in LA check it out. Here's one of her drawings of my favorite view of LA -- looking west from Venice! There's something haywire with the WEEKLY's server, so I'm going to post the article's text in the comments section.
Posted by DougH at 10:44 AM

Untitled (Big Sea #1) (1969)
Sometimes, just getting out of bed in the morning and figuring out what you’re going to do for the day seems like the greatest creative challenge imaginable. I suppose that if one were able to derive artistic satisfaction from accomplishing just that, one would be some kind of Zen master. But one isn’t. At least, this one isn’t. Wouldn’t it be awesome if you could arrange your life so that every morning, you knew exactly where you’d left off in your work, how much you were likely to accomplish, and that your ego would have little or nothing to do with any of it so that the only decision would be to go on living for that day? That last bit’s the tricky part.

These are the thoughts that kept coming to mind while contemplating “Vija Celmins: A Drawings Retrospective” at the Hammer — the only U.S. stop for this Centre Georges Pompidou–organized survey of the one-time Angeleno’s work in graphite and charcoal. More than any other artist associated (however inappropriately) with Pop Art, Vija Celmins was able to actually reduce her presence in the process of making her work to a bare minimum, rather than making grandiose gestures to that effect. I’m thinking of Andy Warhol’s endless delegation of decision making and execution of works — which I love, but for other reasons — whose unmistakable subtext was “Look at me! Look at Me! Look at ME!”

By 1964, Celmins had already experienced a crisis with her previous Abstract Expressionist painting style as a grad student at UCLA (having fled with her family from war-torn Latvia for a new life in Indianapolis — almost certainly an improvement). Inspired by the epically mundane paintings of Giorgio Morandi, the cranky theories of Ad Reinhardt and the ob-comp-lit of Alain Robbe-Grillet’s nouveau roman, Celmins broke through by painting deadpan realist images of the objects sitting around her Venice studio — a toaster, a fan, a double gooseneck lamp, a hotplate, a space heater. These unmediated records of the perception and translation of visual phenomena from three-dimensional reality to two-dimensional reality were the template for Celmins’ eventual disappearance into the work.

You can sense Celmins groping toward this near invisibility in the first room of the chronologically ordered exhibition. While much has been made of the autobiographical overtones of her trompe l’oeil renderings of warplanes (or, more precisely and essentially, of clippings from books and magazines depicting warplanes), the inclusion here of images depicting the Bikini nuclear test, a skyful of clouds, the aftermath of Hiroshima, and space-probe photos of the surface of the moon suggests an attempt to achieve a kind of symbolic neutrality — a flattening — of the extremes that make up human experience. Evil may or may not seem banal, but it is most certainly mundane.

When some of these works were created, Celmins was still painting. In 1968, she decided to quit and focus almost exclusively on drawing (she continued to make remarkable sculptures and explored the meta-seriality of printmaking). And she ditched the mootably melodramatic subject matter for a handful of unmistakably detached vistas — more lunar surfaces, her own photos of the ocean from the end of Venice Pier and Brownian dispersions of pebbles on the floor of Death Valley, and, eventually, galaxies and star fields. Using only graphite pencil, Celmins painstakingly reinscribed these already-once-removed landscapes onto clinical acrylic-primed paper, searching for a way to produce surfaces onto which it was a little more difficult to project.

Celmins’ work has often been described as “beautiful.” And quite rightfully so — the first half of the show consists of some of the most virtuosically handsome scribblings of the last century. But there’s nothing to indicate that the artist was intending anything other than a bare-bones transcription of an aesthetically arbitrary visual field. Other, more metaphorical readings like “romantic” or “mysterious” are even more groundless — though not in any sense incorrect. Celmins’ landscapes seem to be striving for an inversion of the pathetic fallacy (nature anthropomorphized into a sort of Greek chorus commenting on human affairs) where human consciousness is brought — through artistic practice — into a closer approximation of the high indifference of the laws of the universe. Interpretation is irrelevant.

Celmins’ first drawing period lasted until the early ’80s, when she abruptly shifted back to painting and abandoned the pencil. In the mid-’90s, she began making new astronomical drawings by laying down a black field of powdered charcoal and erasing out the stars and galaxies, resulting in an even blacker ground than she was achieving with her dense graphite marks. Although the effect is present in the earlier pencil drawings, the charcoal works galvanize the gallery space with a deep optical magnetism. From any distance, they appear to be glowing black monochromes, but as they draw you in, the void gradually grows studded with an approximate infinity of stars. Together with her most recent series of charcoal cobwebs — which show Celmins dangerously flirting with both a symbolic icon of romanticism and a formal Modernist grid — these accumulations of dark matter make up the equally powerful second half of the Hammer show.

Usually, when an artist has a “drawings” show, it’s a second-string affair, full of sketches and trial runs for the “real” work. But in this case — as with the Ed Ruscha print retrospective at LACMA a few years ago — what is generally considered a secondary oeuvre actually embodies the artist’s vision in its purest form. Drawing, unlike painting, has wide-ranging applications outside the art world — from industrial drafting to medical illustration to mapmaking — and it is on this suggestion of the unadorned communication of data that the success of Celmins’ work hinges. But what it is her drawings are communicating has next to nothing to do with the ocean, or galaxies, or cobwebs, but rather with the mechanisms of perception, the acts of looking and recording, and the principle of accuracy. They are maps of attention to attention.

Ultimately, the place where Celmins stands is not so far from the Abstract Expressionism she left behind. Her practice smacks of creativity reduced to an act of existential will, albeit in a more deliberate, methodical and arguably more responsible construction. Where Pollock could claim “I am nature” for finding techniques to produce paintings that mimicked the apparently random structural patterns of physics and biology, Celmins’ work seems to be taking into account the fact that we are all nature, and that nothing humanity has achieved falls outside its realm — saying, in effect, “I am nature looking at itself.” It doesn’t come much more mysterious than that. And as an excuse to get out of bed, it doesn’t suck either.